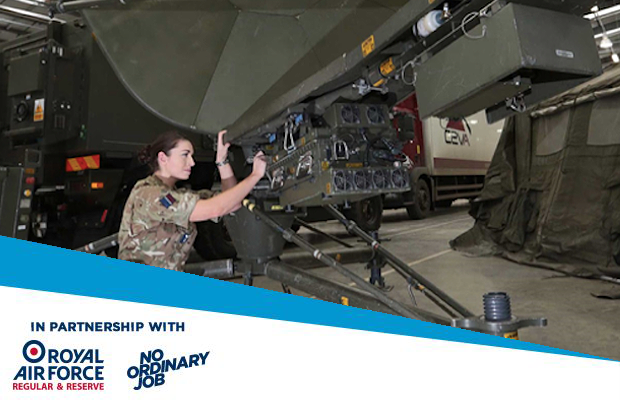 Work-life balance might not be the first thing that enters your mind when you think of the RAF but you’d be surprised at how much freedom employees have. And at the sheer number of exciting things they can get involved in.

It may be a military organisation but it is far from regimented all the time, instead giving you a chance to not only build an exciting career but indulge your passions too. It doesn’t matter whether you’re a school leaver or a graduate, whether you only have GCSEs or you’ve just completed a PhD in computer science, there are brilliant career opportunities for everyone.

You can work in cyberspace intelligence or as an aircraft technician but you can also embark on a career as a chef, musician or a survival equipment specialist, the possibilities are numerous. But whatever role you choose you can expect opportunities to travel, an awesome social life and once-in-a-lifetime experiences.

The RAF lifestyle is never ever dull with the potential to be posted all over the world. Much of your working life will be spent at bases around the UK but most regular roles involve some overseas travel and at any given time, around 10% of regular personnel are working abroad.

You could be involved in supporting active operations, providing relief to victims of natural disasters or supporting peacekeeping initiatives.

Thomas, 19, a Cyberspace Communications Specialist, says: “My best experiences since joining the RAF have come from being able to travel the world; I have been deployed to Afghanistan, Italy, Senegal and the United Arab Emirates on both operations and exercises.”

Thomas is by no means alone – chef Norbert was deployed to the Falklands in 2016 where she found herself and the steward team feeding more than 1,000 personnel. Even when you’re abroad, many jobs are 9 to 5 which gives you plenty of time to experience the location out of hours. With six weeks’ paid holiday a year, you could also explore more of the country you’re based in.

As studying goes, the RAF is one of the best organisations in the world for helping you get qualified. Many RAF staff members are working towards professional qualifications or degrees with the cost either being heavily subsidised or covered by the RAF.

Whether you’re a school leaver or a graduate, the RAF will work with you to give you the skills and training you need.

“Since joining the Royal Air Force, I’ve completed an apprenticeship in warehouse, storage and distribution and, thanks to the extensive training and educational opportunities available to serving personnel, I’m currently working towards gaining further NVQ qualifications. I plan to continue learning through the NVQ system and ultimately undertake a degree in Logistics Management with the support of the RAF,” says Sam, 22, a logistics specialist who left a supermarket job for a rewarding career in the RAF.

All work and no play makes Jack (or Jill) a dull boy (or girl) as they say which is why the RAF gives you plenty of opportunity to indulge in the sports you really love. There are so many activities that you can get involved in which not only help to keep you fit but get you working in teams and keep your social life buzzing.

Chef Norbert says: “Out of the kitchen, I have helped organise a 30-mile charity walk to raise funds for a local physically impaired children’s charity. I also play netball and organised a battlefield tour. If you want to do something outside of the day job, the RAF will support you.”

Cyberspace Communications Specialist Thomas adds: “I have had lots of opportunities for sport and adventurous training, having participated in activities like canoeing, rock climbing, paragliding, mountain biking, hiking and mountain snow survival skills.”

The social aspect of being part of the RAF cannot be underestimated – many of the people you work with will also become your friends and you’ll get to have some great adventures together. There are also plenty of big events, social nights, formal dinners and barbecues for you to let your hair down with your colleagues and achieve a great work-life balance.

You’ll forge lifelong friendships and hang out with people who make your time with the RAF really special.

The RAF is also great at supporting you whatever you want to do. You’ll have the freedom to organise your own events and really get stuck in.

Morag, a 19-year-old air and ground steward, says: “I have managed to travel and also take part in a 100-mile cycle event. I entered the Golden Service Scholarship competition, which is a competition for my trade and feel proud to have reached the regional semi-finals.”

Life in the RAF is certainly never ordinary. It is an ideal organisation in which to forge a successful and varied career. Whether you’re a keen fitness enthusiast, a lover of ball sports or get really excited about canoeing, there is something to keep you entertained in your down time. You could discover passions you never knew you had or get involved in events that make a real difference to other people’s lives. Visit RAF recruitment for more information on available jobs.