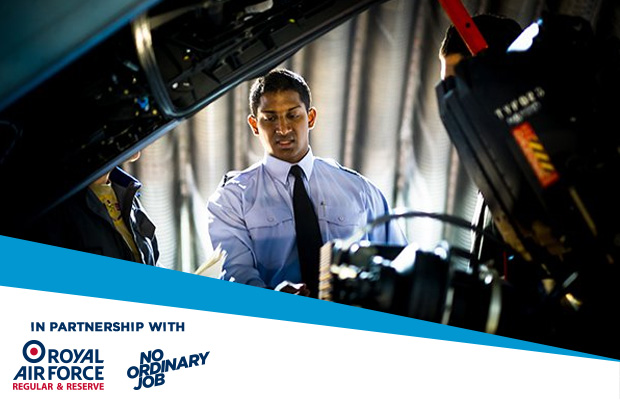 What you could do in the RAF after university

What is it you look for in a graduate employer? Do you want excellent job prospects? Maybe you value vocational training? Or perhaps you crave excitement and adventure - an antidote to several years studying at uni? It might surprise you to know the RAF can provide exactly what you’re looking for and more. And you don’t have to have an overwhelming desire to be a pilot to apply either – there is a wealth of skilled jobs in many different disciplines.

If you’re looking for your first role after university, then it could be time to consider the RAF – it could be the start of an amazing career.

A job in the RAF isn’t just a job – it’s a career in the making. The RAF is a huge organisation with thousands of personnel working together and as a result, there are a myriad of opportunities for career advancement. It is something the RAF is keen to support with subsidised training and development.

As a member of the RAF you’ll also have the chance to gain further qualifications and study for an MSc or an MBA from the defence academy at Shrivenham.

A Communications Engineering Officer is perfect role for engineering graduates – what you learn in your degree will barely scratch the surface of what you could do in your day job.

Communications Engineering Officer Kate Turner says: “My job is about providing a connection. Back to the UK or to the country we’re in. We provide ground to air communications, ground to ground, mobile phone coordination for normal daily business, worldwide wifi packages, connectivity to the official network (the black network) connectivity back to the UK, the organic (Secret) red network that the intelligence officers and air crew use, as well as the lifeline so if anything went wrong, they’d go onto Secret and report it back to the UK.”

Flight Lieutenant Marcus Ramsden adds: “I was responsible for the Queen’s birthday fly pass, where nine RAF Red Arrow Hawks fly over Buckingham Palace as the royal family watch from the balcony. When one of the aircrafts went unserviceable before the show, it was my job to solve the problem. My role became part-engineer, part-project manager.

“I was 29-years-old, in charge, at an unknown location with no tools or test equipment. It was my decision whether we flew with eight aircraft that day – and I knew I’d make the right one.”

Life in the RAF

Forget what you think you know about life in the RAF because there is so much more to it than you could ever have thought of that you simply wouldn’t get from your average civilian job.

Travel – At any one time around 10% of the RAF workforce is deployed abroad and you could be given the chance to take up a posting anywhere in the world. You could be sent abroad at short notice and your tour of duty could last anything from a few weeks to several months. As most jobs, even abroad, tend to follow a 9-5 pattern you’ll have time to explore where you’ve been posted.

Kate says: “I’ve only been in my first job in the RAF for 12 months. In that time, I’ve already done three international exercises and I’m about to go on my fourth. That’s pretty good going compared to other trades out there. I’ve been to Malaysia, Japan and South Korea on exercises with the Typhoon squadron.”

Social life – The bond RAF personnel develop is unique. Because you’ll usually be living on bases you’ll socialise with the people you work with and get to know each other in a way you wouldn’t in a civilian job, forming lifelong friendships.

There are always plenty of social events going on as well as opportunities for you to get actively involved and hold your own.

Sport and fitness – Whatever your sporting passion, you can find it in the RAF. You’ll be expected to stay fit both physically and mentally and it’s up to you whether you decide to join a sports team or make the most of on-site gym facilities. There are clubs for pretty much any sport – scuba diving, football, hockey, tennis and fencing to name just a few.

The RAF also organises adventure training for its personnel both at home and around the world. Imagine trekking the Himalayas or diving in the Red Sea AND getting paid at the same time!

Education – Jobs in the RAF aren’t just jobs, they’re careers and the RAF will do all it can to help you advance. Even for graduates, there is lots of on-the-job training, much of which is either heavily subsidised or paid for by the RAF.

“Since joining the Royal Air Force, I’ve completed an apprenticeship in Warehouse, Storage and Distribution and, thanks to the extensive training and educational opportunities available to serving personnel, I’m currently working towards gaining further NVQ qualifications. I plan to continue learning through the NVQ system and ultimately undertake a degree in Logistics Management with the support of the RAF,” says Sam, a logistics specialist.

To find out more about graduate opportunities visit RAF Recruitment