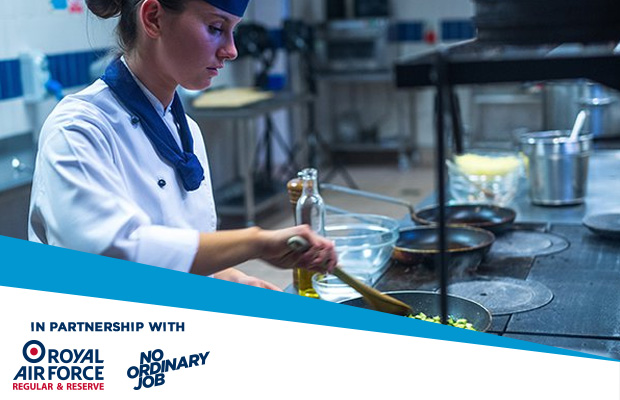 So, you think the RAF is all about being a pilot? Think again. There are more than 50 different roles you could do, whatever your interest and specialism.

The RAF is one of the most technologically advanced organisations in the world and so it needs tech experts to help manage its highly complex communication networks. Imagine working with fighter jets, sensitive communications channels and tactical satellite and imaging equipment – you could be providing vital support on future missions and exercises as well as working on next generation communications. Without such support, safety could be compromised and success could be much less likely.

Thomas, 19, says: “I decided to join the RAF because I wanted a job where I could gain qualifications and have an exciting career, that’s why I chose to be a cyberspace communications specialist.”

If you love helping others and can remain calm in a crisis, then a job as a medic could be ideal.  Just like civilian paramedics, RAF medics are the first on scene when injuries or serious incidents occur.

You could be called to emergency situations during peace time, fly out to help with natural disasters or provide support when on active operations. You could also help repatriate injured personnel to the UK.

As an officer, you’ll be in charge of a team of technicians and managing budgets early on in your career. You could be liaising with the Army or Navy on any given day or be posted abroad to work alongside NATO or other international allies.

Maintaining and servicing weaponry is a vital part of the RAF and it’s a weapon technician’s job to ensure all those important bits of kit are kept in operational condition both on the battle field and during regular operations. In fact, it can be critical to success.

As a weapon technician, you will work with all kinds of weapons and explosives used by the RAF. The role involves arming aircraft, maintaining ejection seats, missile launchers and weapons systems and servicing pistols, machines and mortars. Plus, you’ll get to travel as you can be posted all over the world.

If food is your thing you can’t go wrong with a job as an air and ground steward. One week you might be serving up supper for 100 personnel in the mess, the next you could be catering for a visit from the Queen.

Morag, 19, says: “I thoroughly enjoyed my time at Catering Training Squadron and much to my delight I was awarded with both the 2016 RAF Trainee and Apprentice of the Year accolades for my efforts. My first posting was to RAF Waddington where I have been catering for officer dinner parties, royal visits and balls.”

It’s not just the UK security services which rely on accurate intelligence to keep our country safe. The job of an RAF intelligence officer is vital both in war and peace times. If you have an analytical, inquisitive nature or an interest in criminology, it might be a role perfect for you.

Intelligence officers analyse and present information from all sorts of sources. You will present crews with threat assessments and detailed information before missions. You’ll support squadrons with their operational duties and you could be deployed across the globe to places like Afghanistan or Libya.

“You’ve got sand blowing around outside and jets taking off to fly over hostile territory – the job really comes to life then,” says Pete, a serving Intelligence Officer.

Working on fighter jets is exciting enough but imagine being responsible for keeping the famed Red Arrows in tip top condition. How cool would that be?!

As an aircraft mechanic, you’ll be responsible for maintaining and repairing the RAF’s fleet of aircraft, including the Red Arrows if you’re lucky enough.

Ellie, 19, was posted to the Red Arrows squadron after completing her 10-week basic training course.

“It was a complete shock but a posting that I was very happy with. I currently travel all over the world with the team and am mainly involved in the servicing of the aircraft, while also getting the opportunity to fix the famous aircraft alongside the engineers when I am required,” she says.

If you fancy yourself as a lawyer, then becoming an RAF officer and subsequently a legal officer could provide an exciting career path.

The RAF faces many legal challenges daily both in peacetime and in conflict. Those challenges could be about anything from legal questions around personnel and operational rights to international and humanitarian laws.

One minute you could be carrying out legal training at RAF bases, the next you could be advising officers on the Armed Forces Act or representing personnel in military court.

Think cordon bleu cookery is confined to a few elite chefs in London? Wrong! You can put your culinary expertise to great use within the RAF creating first-class dinners for officers and visiting VIPs. And if you’re really good you might just win an award or two as well.

Norbert, 20, who undertook her training with the RAF, says: “I have quickly gained experience in my trade. This cultivated confidence and empowered me to compete in the RAF Skills Culinary Competition and ‘Exercise Joint Caterer’ achieving gold in the Junior Chicken and Open Caribbean category. In 2015, I was awarded Student Chef of the year and Best Female competitor in 2016."

The RAF isn’t all about planes, weapons and engineering, there are important roles for musicians as well.  Whatever your musical instrument of choice an RAF musician will provide musical support wherever it’s needed. This could be at military concerts or state events. You could even end up on the radio or the TV or taking part in royal events such as the changing of the guard at Buckingham Palace, royal weddings, funerals and Remembrance Sunday at the Cenotaph.

For more information about jobs with the RAF visit RAF Recruitment

Would you get cosmetic surgery at uni?

Poll
How many universities have you heard back from?