Did AQA really ask A-level Chemistry exam questions that aren’t on the specification? 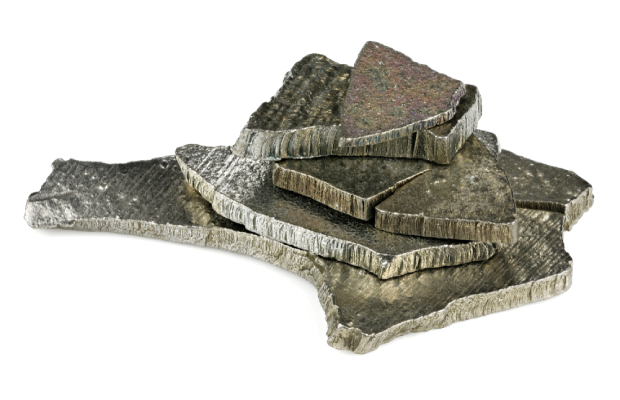 Not one, not two but three of them. At least that's what some of the reactions on TSR and Twitter would suggest.

But the exam board insists that students should have been armed with the knowledge to answer all of the questions.

And indeed, a selection of students on TSR seem to have arrived at the same answers to the questions, with some sticking up for AQA when others have blasted it.

In the TSR thread revealing members’ unofficial mark scheme for the paper, discussion has turned to specific parts of the paper.

Electrospray ionisation: On the spec or not?

In the unofficial markscheme thread for AQA A-level Chemistry Paper 1, TSR member Nish14 expressed their outrage with the inclusion of electrospray ionisation, given that it has not been part of the syllabus for a few years: “Electrospray ionisation was removed in 2015. Shouldn’t have been on the paper!”

And jeriu was keen to see AQA disregard it when marking the papers, asking: “Does anyone know if they will remove the electrospray question? They've done it before with another question.”

Although humera.carter seemed proficient when it came to answering the question, like Nish14, they pointed out it was not really part of the specification: “Electrospray ionisation is when the molecule picks up a proton so if the mz value is 156, the actual mr of the molecule is one less so 155 as you need to subtract the proton mass after. Tricky if you were not taught electrospray as technically, it is not on the spec.”

On Twitter, an A-level Chemistry student’s mum directed her frustration at AQA: “Please can you explain why my daughter had a question on her a level chemistry paper today on a topic that you removed from your own specification in 2015? How can grades be simple when @AQA seem to be disadvantaging their students over other exam boards?” 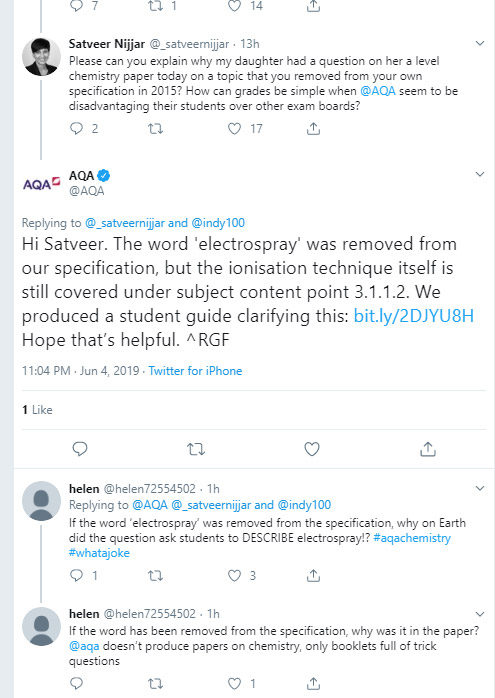 A person known as RGF, tweeting from the official AQA Twitter account, convincingly argued that the electrospray ionisation technique is, or at least should be, still taught: “The word 'electrospray' was removed from our specification, but the ionisation technique itself is still covered under subject content point 3.1.1.2. We produced a student guide clarifying this: http://bit.ly/2DJYU8H  Hope that’s helpful.”

But @Bobmaster909 rebuked the reply, saying: “This coming from someone who revised electrospray ionisation an hour before the exam and who is confident he got most if not all of the marks: this is an unacceptable excuse AQA, who thought it was ok to remove the name of the technique but not the actual technique?!” 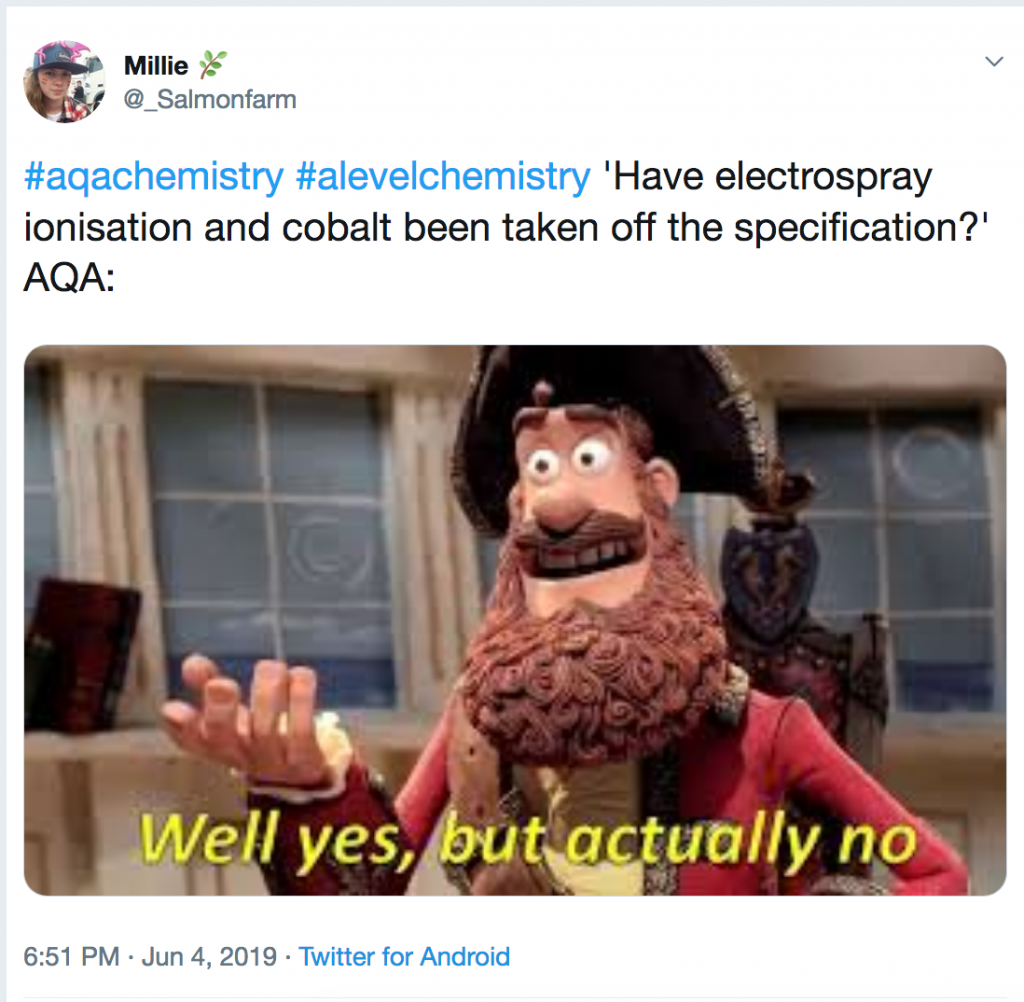 How much do you need to know about cobalt to answer a six marker on it?

The cobalt question wasn't without controversy either, stumping some students because they had neglected to learn about the metal in detail because they were under the impression AQA had removed it from the specification.

Twitter is abound with people posting memes about the cobalt question, with @lthel3east666 saying:

“AQA: ‘ok we have taken Cobalt chemistry off the spec because it was too much to learn for transition metals’

And on TSR, Kayyy30 said: “So is anyone going to file a complaint to AQA for asking a question about COBALT. WHEN. IT'S. NOT. ON. THE. SPEC.

But plokijuh was quick to jump to AQA’s defence, saying: “You didn't need any prior knowledge about cobalt, just the fact that it can form an octahedral shape when reacting with ligands and also the fact that you can get optical isomerism if it is bonded with bidentate/multidentate ligands.

“It works in exactly the same way as copper or any other transition metal that we were meant to learn.” 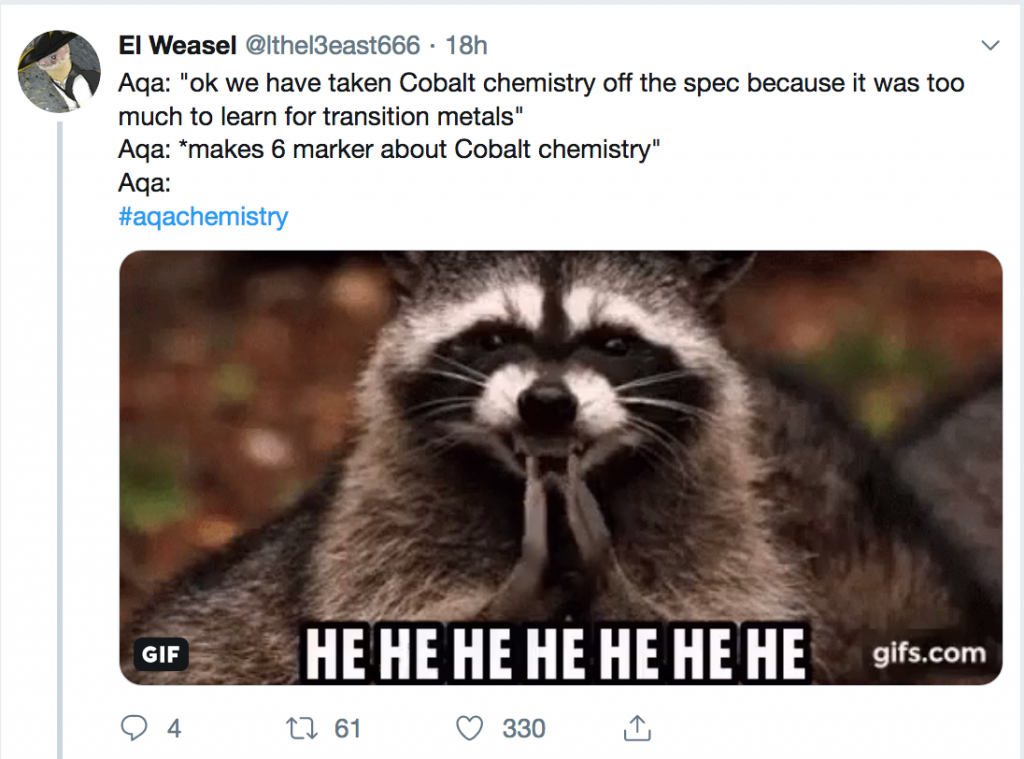 The question on period 4 got a bit of a bashing on Twitter as well, with students implying they simply were not aware they needed to focus on this in their revision.

“AQA : This question is about period 4”

And @bruv_its_habib also took to Twitter to vent his utter bewilderment over this particular question: “AQA has once again made us their bitch, learning period 3 over two years for them to ask us a question on period 4??!!”

Twitter user @JamesAdamLloyd tweeted: "I feel there is a growing trend here. Multiple schools and students,.. including my own brother noticed there were questions that have never been covered in class."

"Electrospray ionisation still falls under section 3.1.1.2 of the specification as a type of ionisation that could be assessed as part of Time of Flight mass spectrometry.

"We’ve provided a teacher guide and a student guide that both include electrospray ionisation. We also wrote a set of questions and answers that exemplify how we will assess this topic mention electrospray. It also features on one of our specimen papers, released in early 2017." 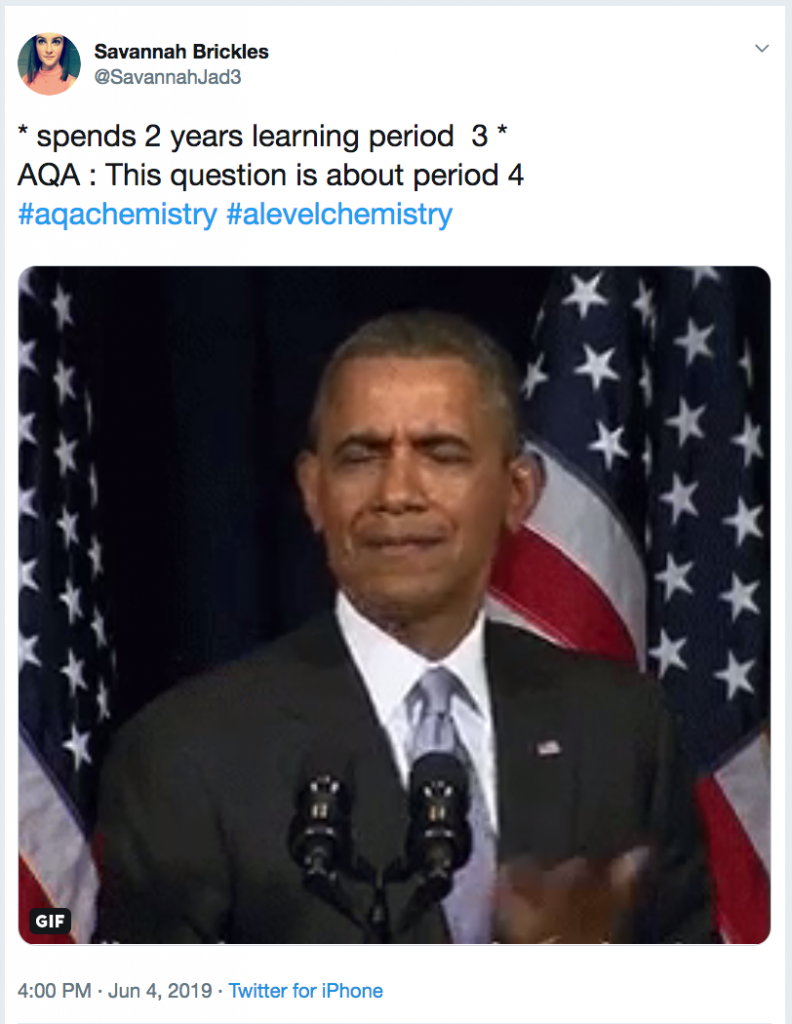 How did you find Tuesday's paper?

What will happen to students who sat the leaked Pearson Edexcel A-level Maths paper?

What will be in the AQA A-level Biology Paper 1 exam 2019 and how long is it?

What will be in the Pearson Edexcel A-level Mathematics Paper 1 and how long is it?

Universities under fire for their handling of sex assault complaints

When is the Pearson Edexcel GCSE Mathematics Paper 2 exam 2019 and how long is it?

What will be in the AQA A-level Mathematics Paper 1 and how long is it?

Are you thinking about dropping out?

Current uni students - let us know how you're feeling

How are you finding uni so far?