What will happen to students who sat the leaked Pearson Edexcel A-level Maths paper? 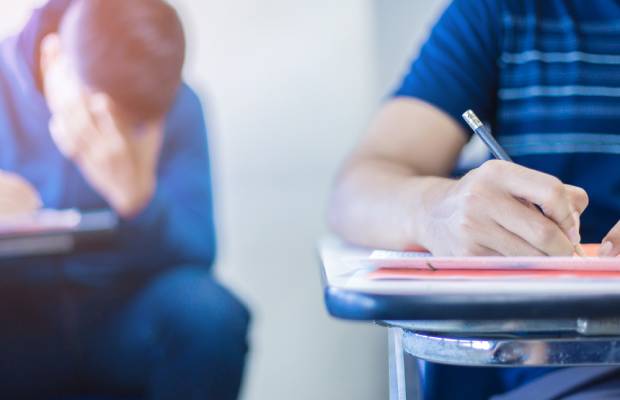 **UPDATE** Pearson Edexcel has released this video statement explaining how the A-level Maths Paper 3 exam leak happened and how it will ensure students are given a fair result.

What will the exam board do now?

It is still not clear how Pearson Edexcel is going to handle Friday’s A-level Maths paper leak, although the exam board has made public the avenues it is considering and insists that no one will need to resit the exam and no one will be disadvantaged.

TSR broke the news that two scribbled-out questions from Pearson Edexcel A-level Maths Paper 3: Statistics and Mechanics had been leaked via Twitter the evening before the 60,000 students sat it on Friday, June 14.

The person who tweeted them was purportedly selling the entire paper for £70, and a student also revealed that they were offered the paper in a WhatsApp group.

Students who sat the paper are understandably concerned about how Pearson Edexcel are planning to ensure fair grading.

Pearson Edexcel has revealed that actions and possible actions it will take to make grading fair for A-level Maths students are:

In a video released by Pearson Edexcel on Tuesday, 18 June, Sharon Hague, head of Pearson's UK schools organisation, said: "Before the exam two questions from the paper were circulating on social media. The questions were heavily blacked out, but I can understand that you may be concerned about this.

"Once the marking is complete, we do have the option of removing these two questions from the final calculation of the grade if we think that is the right course of action. You may also be concerned about how many students had access to the full version of the paper before the exam.

"We are completing a thorough investigation but have no evidence at this point that it was widely shared. I want to reassure you that we have established processes in place to ensure fair and accurate results and so no one will be unfairly disadvantaged. As part of the marking process we will analyse individual student performance as well as that of groups of students.

"From this analysis we will be able to identify whether there are patterns in the results that are unusual for either a particular school or college or students. For those individuals that have been found to have been involved in malpractice we will follow the JCQ guidance which can include withholding results for individual students."

Talking about the option of removing the two questions from the marking, TSR member Graceelizabeth said: "Considering I gained most of my marks on the leaked questions (I didn't cheat though) I'm quite annoyed.

"But hey, they need to make sure it's fair for everyone else so what can you do?"

And in the aftermath of the leak, students posted on TSR about their concerns.

Yorkies said: “After the fiasco of paper 2, I came out of the exam today feeling ok until I heard it had been leaked.

“Fellow students laughing and gloating after the exam that they had got hold of it. This really does need addressing, I am so worried for my results now.”

And damn daniel yeah pointed out what he thinks is the crux of the issue: “The big question is how many people saw the paper as from the sounds of things it is more than a couple hundred,”

The number of people who had access to the exam paper before sitting it has not yet been made public, but a statement from Pearson Edexcel last week revealed that it has identified one centre that is “in serious breach of correct practice.”

It continued: "As a result of further investigations, we retrieved sufficient information to inform the police and they will now investigate this as a criminal matter."

After the leak was revealed, a spokesperson from Pearson Edexcel said last Friday: "All students should be reassured we have well-established processes in place to ensure no one will be advantaged or disadvantaged, and this paper will not have to be resat.”

But students weighed up Pearson Edexcel’s options for dealing with the leak, with TSR member anonymous1231231 saying: “In terms of solutions, there's no 'best' one. Giving predictions doesn't work – some have low ones that they're above, and some have high ones they're below.

“They've already announced that we won't be doing resits, and low grade boundaries doesn't work either in my opinion, because there's still an inflation caused by people cheating, and Edexcel has refused to acknowledge that more than two questions have been leaked, so...”

Talking about the suggestion to award students their predicted grades for the exam, CoolCavy said: “There is no good situation that can come out of this as predicted results is unfair to those who wanted to exceed their predictions, discounting it isn’t fair for those who revised for it and lowering the boundaries gives into the cheaters.

“It is ridiculous and an absolute disgrace that it even happened in the first place. The contingency paper should have been used.

“I hope some semblance of fairness is salvaged for the honest people who took this paper.”

While some students are planning a protest outside Edexcel’s headquarters on Friday, others are refusing to get worked up about the leak, with DeBrevitateVitae saying: “Personally I think people should calm the emotions. There's a huge storm about it but it will be resolved – the likelihood is that there are very few people who actually saw the leaked questions.

“Those that saw the tweet didn't take it seriously because of the amount of fake leaks. The grade boundary setting works is if the majority of the cohort found the exam easy or difficult.”

And Abyssal made it obvious what they thought of the paper: “Joke’s on whoever wasted £70 on that exam paper because it wasn't hard.”

When do A-level results come out?

The deals continue throughout the weekend...

How to juggle A-levels AND Btecs?

Commute to uni or live there?

Poll
Should there be a new university admissions system that ditches predicted grades?