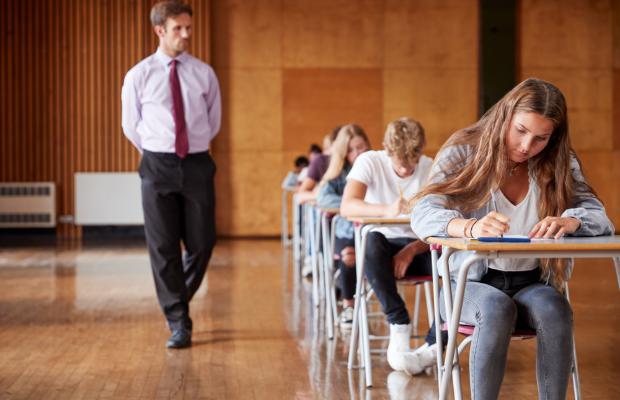 Pressure is mounting on the government to make a 'Scotland-style' reversal on the downgrading of students' A-level results.

In England, almost 40% of results have been downgraded from their original teacher estimates, according to data released by exam regulator Ofqual.

But despite these headline figures, prominent education leaders have released strongly worded statements calling for a review.

“While there has been an overall increase in top grades, we are very concerned that this disguises a great deal of volatility among the results at school and student level," said Geoff Barton, general secretary of the Association of School and College Leaders.

“We have received heartbreaking feedback from school leaders about grades being pulled down in a way that they feel to be utterly unfair and unfathomable.

“They worked very hard to provide accurate grades to the exam boards, carefully following all the guidance, and are dismayed that the statistical model then used to standardise these grades has had such a devastating impact."

Ofqual's data shows that students from independent schools achieved a greater increase in A* or A grades at A-level this year than those at state schools or colleges.

There was a 4.7% increase in A* or A grades at independent schools. The amount of students getting those top grades increased by 1.2% at grammar schools, by 2% at comprehensives and by 1.7% at academies.

Smaller subject cohorts were more likely to be awarded their original teacher-estimated grades, Ofqual has said, because it would be harder to reliably use historical data and apply statistical moderation to smaller groups of students.

"We are deeply concerned that the adjustment process may have disadvantaged larger centres such as colleges and those with historically strong value added data," said the Association of Colleges chief executive, David Hughes.

"There seem to be inconsistencies across the board. While 39.1% of Centre Assessment Grades were adjusted down by one or more grade overall, we are hearing from a number of colleges that over 50% of their grades have been adjusted downwards.

"Colleges with large cohorts and very stable and predictable results over time are seeing their lowest grade profile ever, particularly at the higher grades, A to C."

A petition launched by state school student Curtis Parfitt-Ford, which calls on the government to reverse the downgrading of students' A-level results, has already attracted more than 18,000 signatures.

The education secretary for England, Gavin Williamson, has previously said such a reversal will not be happening in England. On the day before A-level results day, Williamson announced an extra option for students who are unhappy with their grades – the ability to appeal based on their mock exam results.

He described this new option as part of a “triple lock” system designed to make sure students receive a fair grade. The three choices students will have under the triple lock are to accept their calculated grade, ask their school to open an appeal or sit the optional autumn A-level exams, which will run from Monday 5 October until Friday 23 October.

But Geoff Barton warned the government "against simply digging in their heels, and insisting all is well".

“It is not sufficient for the government to dismiss these concerns by saying that schools and colleges can attempt to battle their way through the appeals process, or that students who are not satisfied can enter the autumn exam series some seven to eight months after they finished their courses, and are no longer at the centre where they studied," he said.

More articles related to this topic

Have your say on exam grading

Poll
If you don't put your camera on in online lessons, why is that?