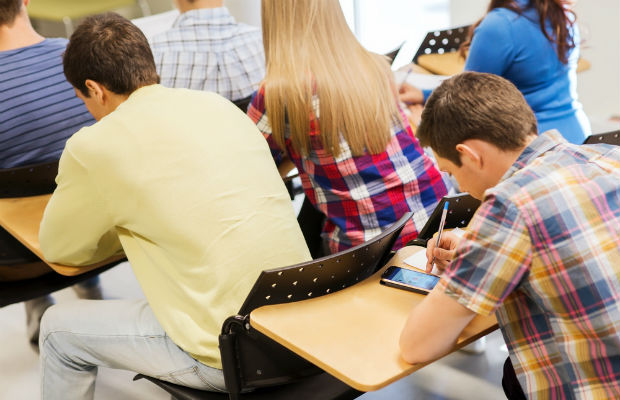 Sneaking your notes into the exam hall is one way to get disqualified, but there are plenty more...

So you get all the key quotations from ‘An Inspector Calls’ tattooed on your left arm. The invigilator spots them and that’s it for you. Fair enough.

But most disqualifications and other penalties are for accidental breaches of rules rather than full-scale attempts to cheat.

Here’s the top five ways that students get disqualified from exams – accidentally.

More like this: eight things that could go wrong in an exam and how to fix them

1. Bringing your mobile phone into the exam

It doesn’t matter whether it’s an ancient relic you borrowed from your grandmother or the latest iPhone.

Mobiles are not allowed, even if they’re turned off, as TSR member Kirsten 1999 discovered: "I was about to leave the room when the invigilator asked me to stay behind. I was confused. I thought maybe she'll tell me off for continuing to write after time was up but no. She said she had to report me for having a phone in the room. My phone didn't even go off. I'm so annoyed."

And another TSR member, ICB, says the rule is clear: "No phones are allowed in the room, even if they are turned off. It might be silly but that's how it is. So you still broke the exam board rules, and you could be penalised for that."

If you do accidentally take your phone in with you and only realise after you've taken your seat, you will be given one last chance. Before the exam starts, the invigilator will ask anyone to hand in their mobile phone who hasn’t already done so – you won’t face any penalties if you hand your phone over at this point, but hanging on to it after this final warning could potentially get you disqualified.

More like this: seven things to do the night before and morning of an exam

2. Writing something rude on your exam script

Oh we’ve all been tempted. A desperate threat to the examiner, justified abuse to the sadists who constructed that impossible paper, even just a stream of swear words to get the frustration out of your system.

Paper_Moon wondered about the consequences of his admissions of his true feelings for biology: "For my biology exam, I answered some of the questions with notes to the examiner and messages about how much I hate biology. Do you think my paper will be disqualified?"

And 999tigger said: "Normally stuff like that is ignored, but if it is deemed ‘inappropriate’ (sounds like it is) then you could get an official warning and if it was deemed ‘offensive’ then they could deduct marks. Not the brightest thing to do."

More like this: what to expect from an exam

3. Disturbing or communicating with other candidates

Surely a little chat about the weather won’t do any harm? Or picking up a neighbour’s dropped pen?

TheKT asked what the rules are on talking before the exam starts: "Someone spoke to me on the way into the exam and I stupidly replied. The invigilator was quite harsh but how do I know if he was planning to report us? And if he did will we be disqualified?"

Exam conditions start as soon as you walk into the exam room and they don’t finish until you’ve exited the room – which means you shouldn't communicate with anyone else taking the exam, even while you’re finding your seat.

Not sure what else is and isn’t allowed in the exam room? Check out the official rules on the JCQ website.

4. Leaving the exam room without permission

Need a toilet break? No problem – but just hold on a minute.

You need to ask. And don’t leave before the exam has ended and you're told you can go.

lizz_ie asked: "If I walked out of an exam half way through, would I get disqualified or would they just take my paper how it was, and mark it like that? I have a two hour exam in June, and I've finished all of the practise papers with over an hour to spare."

And Aquar said: "You MUST stay in the examination room until told to leave because everybody in the country does the exam at a very similar time."

More like this: your guide to handling revision and exam stress

5. Bringing in another ‘smart’ device

It might be nice to listen to some uplifting music to accompany the creation of that inspiring history essay on Elizabeth I.

No chance. Anything that can store data or access the internet is a no-no.

Even old-school wristwatches need to be packed away rather than in their natural habitat of your wrist.

Hannah_H16 asked: "I have a Fitbit Charge that I use as a stopwatch. All I can see is the time, my heart rate and the amount of calories I've burned. Will it be allowed in the exam hall?"

In response, thegalaxy said: "All smart watches –  even Fitbits –  had to be handed in for my mocks. They also even made you take off normal wristwatches."

The JCQ guidance specifies that candidates are not allowed to bring in any of these items:

Exam and revision articles and resources on The Student Room

People are talking about this article Have your say
Article by Pete Langley on Monday 14 May 2018
Last edited by Nik Taylor on Monday 16 May 2022
Have you seen...?

Get prepared for results day!