I'm pretty sure that this Rebecca Black "Friday" video is a big publicity stunt...

jumpthroughtime
Badges: 0
Rep: ?
#1
Report Thread starter 10 years ago
#1
Think about it: EVERYBODY knows her name now, and so now she is famous she can easily get new, better material out there and make tons of money. If she releases a new, good song, everyone will go have a listen because we know who she is and will be interested in what she does. Or, if she goes into acting, we'll all be like "Oh it's that Rebecca Black, I fancy seeing what she's like as an actress"

Basically I feel like we're being treated like tools and this music video/song is deliberately awful to boost her to fame and get Rebecca Black's name out there. What do you think? Agree/Disagree?
15
reply

OpenTheFloodGates
Badges: 0
Rep: ?
#2
Report 10 years ago
#2
Hey, there's a bright side to this. If people spend their time talking about this, we may finally get rid of all the "illuminati" nonsense.

is it worth it?
maybe

What's she done that has boded her name to be plastered up on TSR?

Edit: Just watched the video... I have nothing more to say.

Edit #2: It seemed as if they girl on her left was attractive. Then she faced the camera. That was a BIG disappointment. It could've saved the video had I also had it muted.
0
reply

Although whenever I hear the song I feel like this: 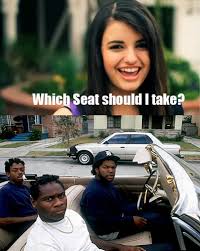 THEY WERE THE CHOSEN ONES!!!!
1
reply

SillyString
Badges: 0
Rep: ?
#9
Report 10 years ago
#9
..Gotta have my bowl, gotta have cereal.
It helps me decide what I want to eat in the morning.

Though the bus ride home is always slightly harder..

member520746
Badges: 0
Rep: ?
#11
Report 10 years ago
#11
I'm pretty sure that making the entire world think that your artist is a talentless teenybopper joke would be the worst marketing strategy in human history.
0
reply

But if you wish to injure yourself mentally - http://www.youtube.com/watch?v=CD2LRROpph0 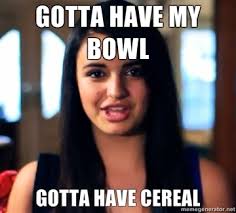 I thought the song was pretty funny,

though she has a horrible, mechanical voice.

Smoked Salmon
Badges: 0
Rep: ?
#14
Report 10 years ago
#14
E! channel said she got death threats... I'm actually surprised about that. I thought everyone would just laugh at the song...
0
reply

lukejoshjedi
Badges: 10
Rep: ?
#16
Report 10 years ago
#16
Or it could have just been a genuine song (that turned out to not be so great and people disliked it) but the controversy and hate and all surrounding it just boosted it into internet meme-dom and infamy, causing her to become Insta-famous

Tumblr, twitter and the internet has made her famous, we have made her famous, whether she wanted to be or not. The video was released February 27th and it blew up randomly on Friday March 11th.... seems a bit odd
1
reply

But if you wish to injure yourself mentally - http://www.youtube.com/watch?v=CD2LRROpph0

I love that ratings have been disabled for her video there.
Clearly acknowledged that there would be 100x the amount of dislikes than likes!
0
reply

reviresco
Badges: 9
Rep: ?
#20
Report 10 years ago
#20
You're suggesting that she is hoping that this song and video increase her fame, popularity and allow her to go on and produce more music or work in other areas of the entertainment industry?

Thanks for pointing that out.
1
reply
X
start new discussion
1
2 3
4