HandmadeTurnip
Badges: 17
Rep: ?
#2
Report 6 years ago
#2
Can you upload bigger pictures? It's impossible to read them.
0
reply 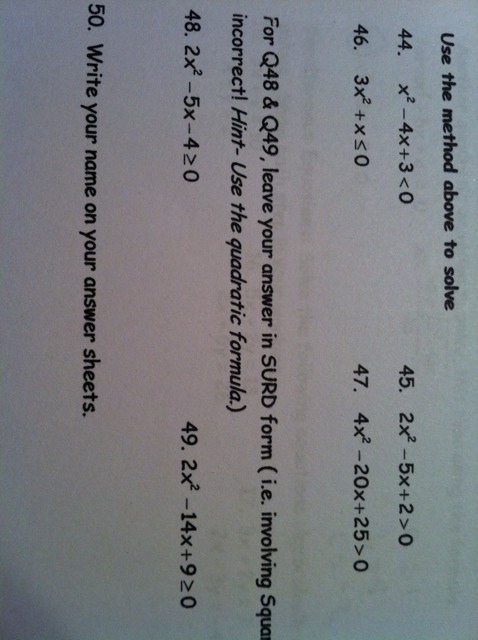 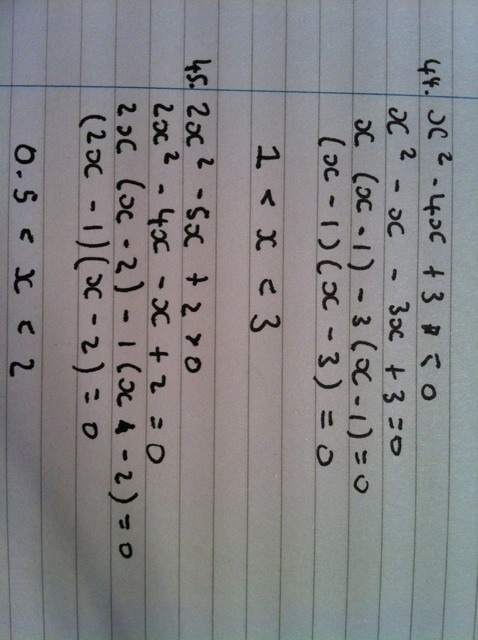 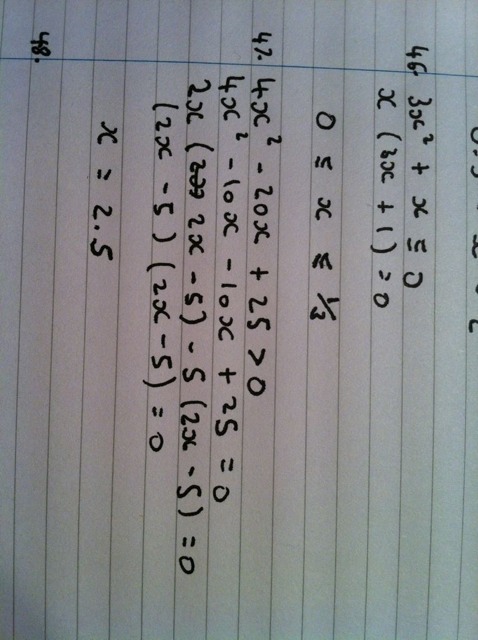 Excuse Me!
Badges: 19
Rep: ?
#5
Report Thread starter 6 years ago
#5
(Original post by HandmadeTurnip)
Can you upload bigger pictures? It's impossible to read them.
Are they better?

cuckoo99
Badges: 12
Rep: ?
#6
Report 6 years ago
#6
it helps to draw graphs when solving quadratic inequality's if you are having problems with which way the inequality sign faces,
0
reply

45. You've factorized correctly but think about what the graph would look like. The question's asking you where it would be positive, i.e. above the X-axis.

46. The second root should be -1/3, which means you'll need to change your answer around a bit.

47. Again, you've factorized correctly but your answer's wrong. If a quadratic has repeated roots what does that mean? and what implications does that have for what the graph looks like?
0
reply

48.
you are gunna need to use the quadratic formula to find the critical values of the inequality. Then look at the inequality and draw it. shade in the area that satisfys the inequality , and then form the inequality expression(s) accordingly. Its kinda hard to explain more without just showing you all the working.
0
reply

HandmadeTurnip
Badges: 17
Rep: ?
#9
Report 6 years ago
#9
For questions 48 and 49, you can't factorize them so you need to plug them into the quadratic formula to find their roots.
0
reply

Jammy Duel
Badges: 21
Rep: ?
#10
Report 6 years ago
#10
Solve them as if they were just equations (using the quadratic formula since it hinted that), then work out which way around the inequalities should be, there are a few ways:

The first is going to be easier since the graphs won't be too hard to plot, the second is probably a bit quicker if you can't visualise the graph. If you pick an arbitrary point between your values of x (preferably one that's easy to get the answer for, so 0 if possible). If that point satisfies the inequality in the question then put the signs so as to make that value part of the solution set; if that point doesn't satisfy the question inequality then set your answer inequalities to not include that point.

eg: suppose it was asking for the solutions to

, obvioulsy the solutions would be 2 and -2, so plug

into the initial equation and you get out the sultion

, this would satisfy the inequality so the solution would be

If the inequality were

would not satisfy the inequality, so the solution would be

(the or being important)
0
reply

Posted from TSR Mobile
There are some notes here on quadratic inequalities if they are of any use to you http://www.mathsbridge.co.uk/2014/09...-revision.html
0
reply
X
start new discussion
Page 1 of 1