What's the song called, it goes like this... Watch

You dry biscuits
If anyone worked out which song you are referring to I'd be amazed lol.

Posted from TSR Mobile
I was amazed OP worked it out!
0
reply

PrincessZara
Badges: 16
Rep: ?
#6
Report Thread starter 4 years ago
#6
(Original post by pbw)
I was amazed OP worked it out!
I am related to the Illuminati (Don't tell anyone)
0
reply

John55
Badges: 14
Rep: ?
#9
Report 4 years ago
#9
Catwoman (Selina Kyle) is a fictional character appearing in American comic books published by DC Comics, commonly in association with the superhero Batman. The character was created by Bob Kane and Bill Finger, and made her debut in Batman#1 (Spring 1940), in which she is known as "the Cat." Catwoman has traditionally been portrayed as a supervillain and adversary of Batman, but since the 1990s, she has been featured in an eponymous series that cast her as an antiheroine rather than a traditional villain. Catwoman is known for having a complex love-hate relationship with Batman and has been Batman's most enduring love interest.[2]The original and most widely known Catwoman is Selina Kyle. The character was partially inspired by Kane's cousin, Ruth Steel,[3][4] as well as actress Jean Harlow. In her first appearance, she was a whip-carrying burglar with a taste for high-stake thefts.[5] For many years the character thrived, but from September 1954 to November 1966 Catwoman took an extended hiatus due to the newly developing Comics Code Authority in 1954. These issues involved the rules regarding the development and portrayal of female characters that were in violation of the Comics Code, a code which is no longer in use. In the comics, two other women have adopted the Catwoman identity, apart from Selina: Holly Robinson[5] and Eiko Hasigawa.[6]A popular figure, Catwoman has been featured in most media adaptations related to Batman. Actresses Julie Newmar, Lee Meriwether, and Eartha Kitt introduced her to a large audience on the 1960s Batman television series and the 1966 Batmanmotion picture. Michelle Pfeiffer portrayed the character in 1992's Batman Returns. Halle Berry starred in a stand-alone Catwoman film, 2004's Catwoman, which was a critical and commercial flop, and bears little to no resemblance to the Batman character. Anne Hathaway portrayed Selina Kyle in the 2012 film The Dark Knight Rises and, most recently, a young version of Kyle is played by Camren Bicondova on the 2014 television series, Gotham.Catwoman was ranked 11th on IGN's "Top 100 Comic Book Villains of All Time" list,[7] and 51st on Wizard magazine's "100 Greatest Villains of All Time" list.[8] Conversely, she was ranked 20th on IGN's "Top 100 Comic Book Heroes of All Time" list,[9] as well as 23rd in Comics Buyer's Guide's "100 Sexiest Women in Comics" list.[10]
Contents [hide]
Character and publication historyCreationBatman's creator, Bob Kane, was a great movie fan and his love for film provided the impetus for several Batman characters, among them, Catwoman. She was partially inspired by 1930s film star Jean Harlow who at Kane's then-early and "impressionable age ... seemed to personify feminine pulchritude at its most sensuous." Kane and Finger wanted to give their comic book sex appeal, as well as a character who could appeal to female readers; they thus created a "friendly foe who committed crimes but was also a romantic interest in Batman's rather sterile life."[11] Catwoman was meant to be a love interest and to engage Batman in a chess game, with him trying to reform her. At the same time, this character was meant to be different from other Batman villains like the Joker in that she was never a killer or evil.As for using cat imagery with their Catwoman, Kane states he and Finger saw cats as "kind of the antithesis of bats."[12]“I felt that women were feline creatures and men were more like dogs. While dogs are faithful and friendly, cats are cool, detached, and unreliable. I felt much warmer with dogs around me—cats are as hard to understand as women are. Men feel more sure of themselves with a male friend than a woman. You always need to keep women at arm's length. We don't want anyone taking over our souls, and women have a habit of doing that. So there's a love-resentment thing with women. I guess women will feel that I'm being chauvinistic to speak this way, but I do feel that I've had better relationships with male friends than women. With women, once the romance is over, somehow they never remain my friends.”— Bob Kane[13]Golden and Silver Age 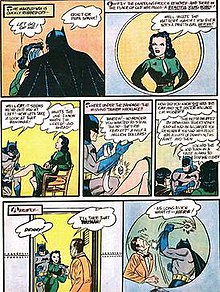 Selina Kyle's first appearance as The Cat in Batman #1 (Spring 1940).
Catwoman, then called "the Cat," first appeared in Batman #1[14] as a mysterious burglar and jewel thief, revealed at the end of the story to be a young, attractive (unnamed) woman, having disguised herself as an old woman during the story and been hired to commit a burglary. Although she does not wear her iconic cat-suit, the story establishes her core personality as a femme fatalewho both antagonizes and attracts Batman. It is implied Batman may have deliberately let her get away by blocking Robin as he tried to leap after her. She next appears in Batman #2 in a story also involving the Joker but escapes Batman in the end. InBatman #3 she wears a fur mask and again succeeds in escaping Batman.Batman #62 (December/January 1950) reveals that Catwoman is an amnesiac flight attendant who had turned to crime after suffering a prior blow to the head during a plane crash she survived. She reveals this after being hit on the head by a piece of rubble while saving Batman while he was chasing her. Although, in issue 197 of The Brave and the Bold, she later admits that she made up the amnesia story because she wanted a way out of the past life of crime. She reforms for several years, helping out Batman in Batman #65 (June/July 1951) and #69 (February/March 1952), until she decides to return to a life of crime in Detective Comics #203 (January 1954), after a newspaper publishes stories of Batman's past adventures and some crooks mock her about it. However, Catwoman prevents her thugs from murdering Batman once he is later found knocked out, but quickly claims she wants him as a hostage. Catwoman appears again as a criminal in Batman #84 (June 1954) and Detective Comics #211 (September 1954) for her final appearance until 1966. This was mostly due to her possible violation of the developing Comics Code Authority's rules for portrayal of female characters that started in 1954.In the 1970s comics, a series of stories taking place on Earth-Two (the parallel Earth that was retroactively declared as the home of DC'sGolden Age characters) reveal that on that world, Selina reformed in the 1950s (after the events of Batman #69) and had married Bruce Wayne; soon afterward, she gave birth to the couple's only child, Helena Wayne (the Huntress). The Brave and the Bold #197 (April 1983) elaborates upon the Golden Age origin of Catwoman given in Batman #62, after Selina reveals that she never suffered from amnesia. It is revealed that Selina Kyle had been in an abusive marriage, and eventually decides to leave her husband. However, her husband keeps her jewelry in his private vault, and she has to break into it to retrieve it. Selina enjoys this experience so much she decides to become a professional costumed cat burglar, and thus begins a career that repeatedly leads to her encountering Batman.The Earth-Two/Golden Age Selina Kyle eventually dies in the late 1970s after being blackmailed by a criminal into going into action again as Catwoman, as shown in DC Super-Stars #17 (November/December 1977).
0
reply

PrincessZara
Badges: 16
Rep: ?
#11
Report Thread starter 4 years ago
#11
(Original post by john55)
catwoman (selina kyle) is a fictional character appearing in american comic books published by dc comics, commonly in association with the superhero batman. The character was created by bob kane and bill finger, and made her debut in batman#1 (sprin.

TheThiefOfBagdad
Badges: 13
Rep: ?
#19
Report 4 years ago
#19
Tom's Diner is by Suzanne Vega. Both Giorgio Marauder and Britney Spears can **** off.

I couldn't find the one of just the two people hugging... but you get the idea...