Hitler and Stalin were left wing JuliusDS92
Badges: 17
Rep: ?
#3
Report 5 years ago
#3
The whole left-right spectrum only really applies to economic policy. In that sense yes, Hitler was quite left wing.

As soon as people try to add on social policy the use of the words "right wing/left wing" lost most of their meaning.
3
reply

JuliusDS92
Badges: 17
Rep: ?
#5
Report 5 years ago
#5
(Original post by Dumachi)
Left is nothing other than the destruction of freedom and liberty by giving it to the goverment. It always ends in tyranny and wars. Absolute power absolutely corrupts.
What do you mean by left wing? In an economic sense? Or the colloquial politically all encompassing sense?
0
reply

Secondly, the definition of 'left-wing' is to be in favour of social equality in opposition to social hierarchy and social inequality. By this standard, neither Hitler and Stalin were 'left-wing', seeing as they both, in their own ways, created social hierarchies. Hitler was also incredibly nationalistic and militaristic: again, not left-wing.

To simply define left and right in terms of economics misses the obvious point that economics has a clear bearing on social hierarchy and inequality.


(Original post by Dumachi)
Left is nothing other than the destruction of freedom and liberty by giving it to the goverment. It always ends in tyranny and wars. Absolute power absolutely corrupts.
All mixed-market economies today, whether they're social or liberal democracies, give up some degree of freedom and liberty to the government. Is every country on Earth today left-wing, and is every country on Earth going to end in tyranny? Your statement seems to be incredibly tenuous.

You also ignore the fact that there are some 'left-wing' political systems, most notably anarchism and libertarianism, which contain no State, and that these have been tried in the past and were, internally, relatively successful. See, for instance, the Ukrainian Free Territories around 1920 and the Spanish anarchist regions of the 1930s, which were eventually dismantled not due to internal problems, but due to the Leninists in the case of Ukraine and a combination of attacks by Stalinists and Franco fascists in Spain.

As George Orwell wrote in Homage to Catalonia:


Up here in Aragon one was among tens of thousands of people, mainly though not entirely of working-class origin, all living at the same level and mingling on terms of equality. In theory it was perfect equality, and even in practice it was not far from it. There is a sense in which it would be true to say that one was experiencing a foretaste of Socialism, by which I mean that the prevailing mental atmosphere was that of Socialism. Many of the normal motives of civilized life—snobbishness, money-grubbing, fear of the boss, etc.—had simply ceased to exist. The ordinary class-division of society had disappeared to an extent that is almost unthinkable in the money-tainted air of England; there was no one there except the peasants and ourselves, and no one owned anyone else as his master... I recognized it immediately as a state of affairs worth fighting for...so far as one could judge the people were contented and hopeful. There was no unemployment, and the price of living was still extremely low; you saw very few conspicuously destitute people, and no beggars except the gypsies. Above all, there was a belief in the revolution and the future, a feeling of having suddenly emerged into an era of equality and freedom. Human beings were trying to behave as human beings and not as cogs in the capitalist machine.
And, as the historian Gaston Leval wrote:


Very quickly more than 60% of the land was collectively cultivated by the peasants themselves, without landlords, without bosses, and without instituting capitalist competition to spur production. In almost all the industries, factories, mills, workshops, transportation services, public services, and utilities, the rank and file workers, their revolutionary committees, and their syndicates reorganized and administered production, distribution, and public services without capitalists, high salaried managers, or the authority of the state.

Even more: the various agrarian and industrial collectives immediately instituted economic equality in accordance with the essential principle of communism, 'From each according to his ability and to each according to his needs.' They coordinated their efforts through free association in whole regions, created new wealth, increased production (especially in agriculture), built more schools, and bettered public services. They instituted not bourgeois formal democracy but genuine grass roots functional libertarian democracy, where each individual participated directly in the revolutionary reorganization of social life. They replaced the war between men, 'survival of the fittest,' by the universal practice of mutual aid, and replaced rivalry by the principle of solidarity....

This experience, in which about eight million people directly or indirectly participated, opened a new way of life to those who sought an alternative to anti-social capitalism on the one hand, and totalitarian state bogus socialism on the other.
7
reply

Drop Dead Fred
Badges: 0
Rep: ?
#7
Report 5 years ago
#7
I think you are right in the old sense of what Left and Right were

Both were totalitarian while the far-right to the extreme right wanted as little, if no government at all


Even Volkswagen comes from the German Labour Front that was set up by the Nazi's.

Anyone who tells you oh Nazi's pure evil. No, they did some good things to combat Germanys economic crisis.

Hitler was popular for a reason.
0
reply

Anyone who tells you oh Nazi's pure evil. No, they did some good things to combat Germanys economic crisis.

Hitler was popular for a reason.
Yes, he destroyed the acceptance of toothbrush moustaches for men everywhere.
It is probably the worst thing that he ever did.!!! 😡
0
reply

Smash the ZOG
Badges: 0
Rep: ?
#9
Report 5 years ago
#9
Nazi's were against usury and the international bankers. This is why the Jews hated socialist Germany and the great things the economic miracle they pulled off.
0
reply

Hitler would have been at the top in the middle, slightly to the left.
2
reply

That's the same as saying that we should hate Germans because Hitler was German, or that we should destroy Islam because of a group of so called 'Muslims'. The whole point of parties is that they represent different points on a spectrum between extreme left and extreme right, both of which are equally unfavourable.
Every group has an extremist minority.
0
reply

viddy9
Badges: 16
Rep: ?
#13
Report 5 years ago
#13
(Original post by ruby420)
I always thought anarchy was a left wing concept?
It is: anarchism and libertarianism are both 'left-wing' ideologies (again, it's a shame that we have to use these terms - can't we just focus on which policies increase the general well-being of people?) Some say that 'the right' deliberately tried to take and use the terms for their own purposes, but regardless of whether they did so deliberately, they've been successful to a large extent with 'libertarianism'.

But, the classical libertarians (Bakunin, Kropotkin, and so on) were, of course, opposed to capitalism, the state and religion, not just the latter two; indeed, they advocated challenging authority and established power, and dismantling hierarchical structures, whereas capitalism happily props up these structures.
0
reply 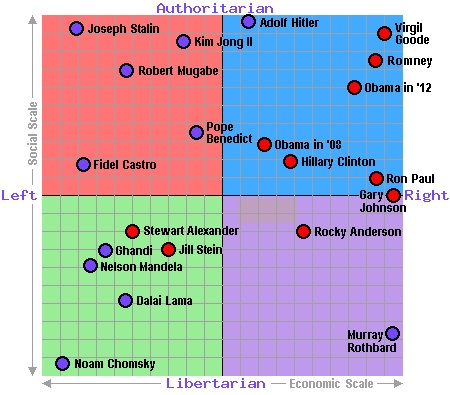 if you are implying that full communism is complete government control then you don't understand communism - communism is literally governmentless, so things such as "communist state" or communist government, are oxymoronic
0
reply

do u know why there are real political parties on the left and none on the right? libertarian and constitutional republic isnt a functioning political party. Because that line of political philosophy doesnt work in real life.
0
reply
X
start new discussion
Page 1 of 1