IfYouCanDreamIt
Badges: 15
Rep: ?
#1
Report Thread starter 5 years ago
#1
Please could somebody read this essay and tell me how many marks you'd give it out of 36? I'll post a picture of the mark scheme and a link to last year's mark scheme ( http://filestore.aqa.org.uk/subjects...W-MS-JUN15.PDF )although the questions were different. Thankyou! 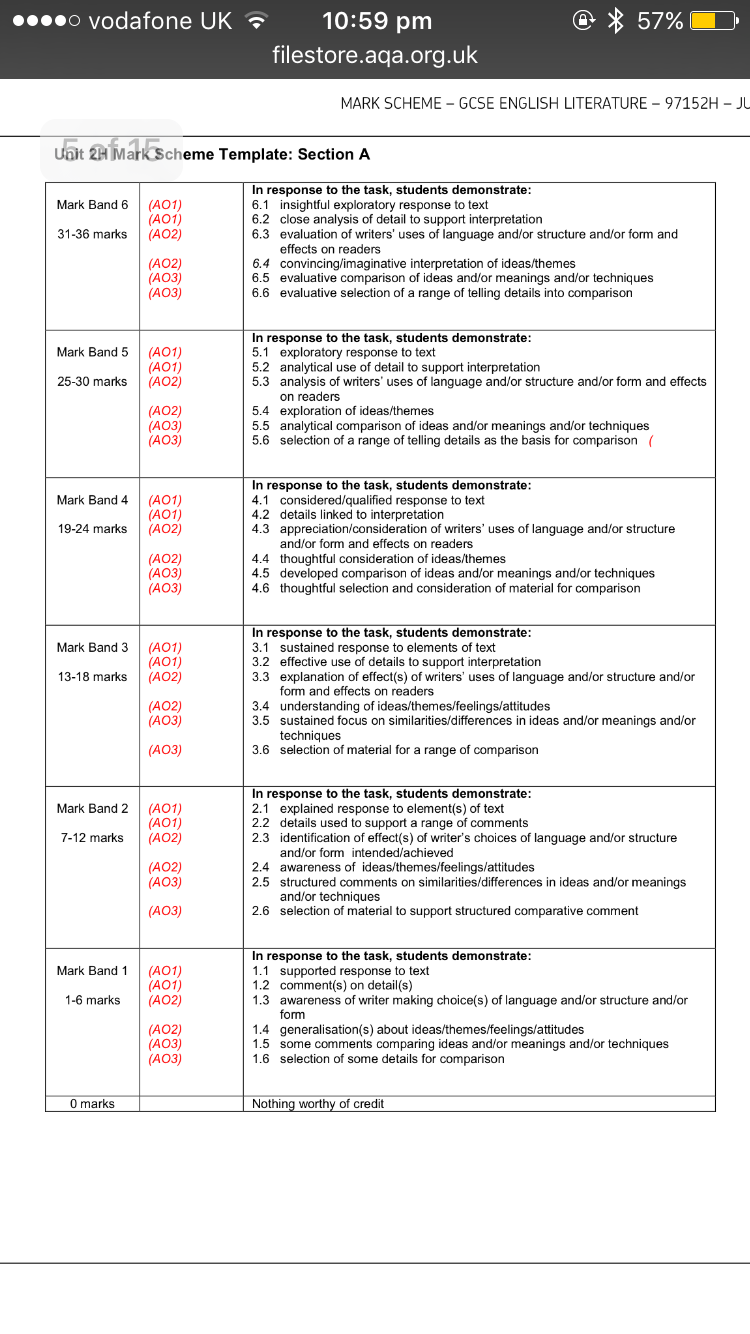 Compare how conflict in love is shown in Quickdraw and one other poem.

Both Quickdraw and In Paris With You show conflict and the negatives of love through the use of language and structure.

Both poems focus on the breakdown of a relationship, although Quickdraw shows the moment this happens, whereas in In Paris With You it has occurred in the past and the speaker is reflecting on it.
Quickdraw shows a one sided snapshot of a relationship; the speaker is waiting for contact from her lover. The context of the poem is unclear, and it would appear that some sort of disagreement has occurred before the events of the poem. The poem considers the ways people in relationships try to hurt each other with words.
In Paris With You takes the reader through the journey of trusting and being part of a relationship again. The poem contrasts the fantasy of perfect love with reality, and the speaker rejects the 'traditional' views on love in search of this reality.

Quickdraw presents the ideas of deliberately hurting someone you love, and being hurt yourself by their words. 'Your voice like a pellet… You've wounded me'. This is presented to explore the reasoning behind it; we feel a fleeting moment of power, which promptly disappears as the other retaliates. The word 'pellet' shows how hard and sharp words can be, like bullets, and the damage they can inflict.
In contrast, In Paris With You presents the idea of the consequences of love, through a sarcastic, bitter tone. 'Don't talk to me of love'. This shows how conflict in relationships can cause so much emotional pain, also shown in Quickdraw. The imperative 'don't' shows how much trauma the speaker has experienced and their reluctance to discuss it.

Both poems use imagery, although there is more presented in Quickdraw, to express the consequences of conflict.
Quickdraw uses an extended metaphor throughout the poem comparing on argument over the phone to a gunfight. 'Squeeze the trigger of my tongue'. This has been done to fully express to the reader how destructive words can be from someone you love. The word 'squeezed' shows how the speaker is tentative about pressing the trigger, meaning she realises the damage she could inflict, but fires anyway.
In Paris With You also uses a metaphor to express a relationship; the concept of paris becomes a metaphor for their relationship, as the relationship grows stronger ad they discover mor about paris and themselves. 'Let's talk of paris'. The concept of their relationship being expressed in the metaphor of paris is explored more deeply in the last stanza, when the speaker begins to open up more about themselves and the relationship. This shows that although the breakdown of the first relationship was painful, the speaker is slowly becoming used to the idea of developing another relationship being able to tryst someone else again.

In conclusion, both poems use language techniques to present conflict in love reflecting on the idea of the breakdown of a relationship, although Quickdraw presents the ideas at the time of the breakdown, and In Paris With You shows them at the beginning of a new relationship.
0
reply

ULotWillFail
Badges: 3
Rep: ?
#2
Report 5 years ago
#2
U wont get high marks without elaborating on strucure, n u try put poets themes and messages in there somewhere
2
reply

IfYouCanDreamIt
Badges: 15
Rep: ?
#3
Report Thread starter 5 years ago
#3
(Original post by ULotWillFail)
U wont get high marks without elaborating on strucure, n u try put poets themes and messages in there somewhere
Okay, thank you, I'll try to remember that for the exam
1
reply
X
start new discussion
Page 1 of 1