Air China's advice was neither "racist" nor "untrue".

Have your say on the future of assessment and exams >>
start new discussion reply
Page 1 of 1
Skip to page:

A Chinese airline has come under fire for allegedly advising its passengers to avoid areas in London which house a particularly high number of Indian, Pakistani or black inhabitants. Air China included the comments as part of their in-flight magazine, where they warned that precaution in the aforesaid communities was advisable - implying that these neighbourhoods suffer from an abnormally high crime rate. However, since the story has become mainstream there has been a lot of false accusations of racism as they believe Air China are advising its passengers to avoid minority groups in the capital. Labour MP, Virendra Sharma, was particularly upset by the comments saying they were "untrue" and "racist", before going onto say she will "demand" a response and has even threatened to question their legitimacy in operating on British soil.

So let's dissect both aspects of the story which seem to have caused a stir: it being "untrue" and it being "racist".

Let's start with the accusation of the advice being "untrue";

Here are the six boroughs with the largest percentage of BME:
[crime ranking with 1 being the highest/ total number of boroughs including Heathrow]

Here are the six boroughs with the largest percentage of Asians:
[crime ranking with 1 being the highest/ total number of boroughs including Heathrow]

Here are the six boroughs with the largest percentage of blacks:
[crime ranking with 1 being the highest/ total number of boroughs including Heathrow]

And here are the six boroughs with the largest percentage of whites:
[crime ranking with 1 being the highest/ total number of boroughs including Heathrow]

As you can see, boroughs which are occupied by a high percentage of blacks in London are some of the most crime-heavy areas in the capital. Although there is a disparity when it comes to areas with a high percentage of Asians, the two best performing boroughs - Harrow and Redbridge - have a particularly high number of Indians; whereas the four worst performing boroughs - Newham, Brent, Tower Hamlets and Ealing - have a particularly high number of Arab Asians, Bangladeshis and Pakistanis. 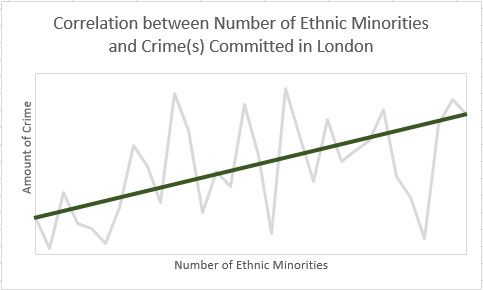 According to the Metropolitan police, the latest available data from 2010 shows that black men - in the capital - are responsible for 54% of street crime, around 50% of all knife crime, 59% of percent of robberies and 67% of all gun crime - even though blacks only account for 13% of London's population; and black men account for only 7% of it.

Now let's focus on the advice being racist.

According to the Oxford English Dictionary,racism is:

Prejudice, discrimination or antagonism directed against someone of a different race on the belief that one's race is superior.

Now let's understand what the leaflet on the Air China flight to London said:

London is a safe place, however precautions are needed when entering places mainly populated by Indians, Pakistanis and black people...

Air China did not advice its passengers to avoid Indians, Pakistanis or black people.

Air China did advice its passengers to avoid "places mainly populated by Indians, Pakistanis or black people", because as we've just shown, areas in London with a high proportion of ethnic minorities suffer from abnormally high crime rates compared to less diverse areas. This fact is not implying that blacks, Indians and Pakistanis are more prone to violence. However, blacks, Indians and Pakistanis are more likely to live in poverty or on a lower income, hence why these areas suffer from particularly high crime rates. Although it would have been more politically correct to say to avoid areas which have are more deprived, it isn't "racist" or "untrue" to say areas with a high percentage of minorities are more prone to crime and disorder.

The north, for instance - which has the highest percentage of white Britons behind Wales - is also prone to crime and disorder for the exact same reasons. Although it wouldn't be politically correct to tell people to avoid council estates, it wouldn't be "racist" or untrue" to imply that crime is particularly high in those places and among lower-income white working class boys.

The notion that Air China was being "racist" or "untrue" in implying that London boroughs with a high percentage of minorities are particularly crime-heavy is utter drivel. It is not racist to imply a basic correlation, although it is racist to label a minority as more prone to violence and disorder. The reason political correctness needs to be abolished is because it is making people delusional when it comes to actualities regarding high crime, poverty and racial disparity. As oppose to blaming overt and obvious problems in any regard, we're forced to ignore cogent analysis on particular issues to appease a narrative which the left call inclusive speech.

I don't support Air China's comments. They were unnecessary; and they could easily be conveyed in the wrong limelight - hence the uproar. Crime and disorder has nothing to do with race, but a lot to do with income and social wellbeing. The reality that blacks and other minorities are more likely to live in poverty - and that blacks are more likely to grow up in a single-parent household - is an unfortunate inequality that needs to be discussed openly and rationally. Nevertheless, the false accusations of racism and the outright hysteria shown from a lot of members on this forum proves why any such dialogue on the topic cannot be achieved.
0
reply
X
start new discussion
Page 1 of 1
Skip to page: