ProtócolsOfZíon
Badges: 0
Rep: ?
#1
Report Thread starter 4 years ago
#1
I thought I'd share another great article by Israeli born now British citizen Gilad Atzmon. He is far from a Trump supporter, but a defender of those who are attacked by certain Jewish groups like Jeremy Corbyn has. I mean really we can't go long without hearing about some Labour anti-semite scandal can we?

So what did Trump say? he simply named names of people who do not have America's interests and are undermining our Democracy. 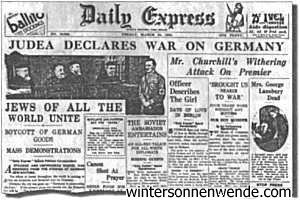 Introduction by Gilad Atzmon: Back in 1933, long before Hitler imposed a single restriction on German Jews, the leaders of worldwide Jewry declared a war on Hitler's Germany. Some argue that the German animosity towards Jews in the 1930's, that led to the Holocaust, cannot be realised without taking into consideration the Judea war against Germany.

Seemingly some Jews never learn the lesson. Performing the symptoms of Pre Traumatic Stress disorder the Jewish Chronicle is already at war with the next American president.

The following is a recent article from the Jewish chronicle on Donald Trump's victory.

November 9, 2016 It is not an accusation, merely a statement of fact, to describe Donald Trump as a racist, misogynist bully. That such a man can be elected as President of the United States is deeply chilling.

For Jews, there is one specific aspect of his ascendency that is so worrying. His campaign was self-consciously antisemitic. One of his main themes was that a global elite was conspiring against ordinary Americans. This is not only a classic antisemitic meme; the examples cited by Mr Trump were all – every one of them – Jewish, such as George Soros and the President of the Federal Reserve. Anyone who denies this element to Mr Trump’s campaign is living in a self-deluded fantasy.

With our history, that is a desperate prospect.

Many of us have always looked to the US as a beacon of freedom. When the Third Reich looked unstoppable and Britain stood alone, it was the US that then sacrificed so many of its sons to defeat the Nazis. In the Cold War it was the US, through Nato, that ensured the Soviet Union was held in check. And in recent years Nato has helped preserve the long-delayed freedom of Eastern Europe from the Warsaw Pact.

All that is now threatened. Mr Trump cites Vladimir Putin as a role model and believes Nato no longer has a purpose. The message is clear: far from standing up to an aggressive tyrant, he will willingly acquiesce in that aggression.

For Jews, these are worrying times. We have already been scapegoated by Mr Trump, so it is no supposition to suggest that worse may be to come. History shows that when bullies take charge, they turn on the Jews.


Some of my own thoughts on this.

Why do they say for Jews, as if what this writer speaks for all Jews?

Trump polled well with Jews and Israeli Jews especially. He's probably the least anti-semetic person there is. His family is now Jewish as their daughter married and converted. He's always had close relations with them, from giving money to charities and one time he even saved an Orthodox Jewish boys life by flying him on his private jet to get emergency treatment. Hardly the Third Reich is he?

I have come to realise that that a lot of truth to these anti-semetic labelled conspiracy theories. Many conspiracy theories typically revolve around wars, revolutions, control of money... even accusations of plotting genocide. It seems unbelievable how such a small minority could do this. But they are not like most are they? many act as one. Jewish tribalism. They are extremely wealthy and powerful and their population is spread all over. Being a small minority doesn't matter. Even 1% of the population and you could have several billionaire oligarchs influencing politics, and media being influenced by them.

I mean look at the percentage of American Jews. But look at how many are justices of the supreme court are Jewish. It's like a 900% over representation.


It appears that they want a war with Russia and this may have something to do with their opposition to Western foreign policy in the Middle East that some experts have mentioned benefits Israel.

Many of the neo-conservatives like Paul Wolfowitz, Robert Kagan, Richard Perle are Jewish and backed the hawkish Hillary Clinton. The sanctions that are against Russia originate from the US treasury, which of course is run by them. The media, like the economist prints pieces like this.


Maybe they did the same to Germany in a way. This anti-semitism didn't come out of nowhere, it was provoked and created by bad behaviour. Some of it comes of course from the fact many Jews were communists who of course committed plenty of atrocities.


A while back the Jewish chronicle went as far as saying with Corbyn being Labour leader, the Jews have never felt as uneasy since the times of the Third Reich...


How mad are these people and are there any Jews on here against them?

Who thought two quite polar opposites, Jeremy Corby and Donald Trump could have something in common?

Should the school day be extended to help students catch up?