How do you feel about third wave feminism?

$$TRUMP4PRESI$$
Badges: 3
Rep: ?
#1
Report Thread starter 4 years ago
#1
People tell me it is often aggressive and prejudiced towards white, straight men do you find this to be true?
0

Dodgypirate
Badges: 6
Rep: ?
#4
Report 4 years ago
#4
(Original post by $$TRUMP4PRESI$$)
Why?
All I hear from feminists is: "Our (third Feminist) movement has been hijacked by a small minority, and this minority doesn't represent us", but the fact is they are the vocal majority. YouTube, Twitter, Tumblr, and other social media sites are rife with them.

What's worse, you don't get any sort of condemnation from mainstream Feminists. It's almost as if they welcome the hate towards straight white men in the guise of "patriarchy" and "institutional oppression".

American universities, in particular, are targeted by these zealots, and I don't see it getting any better any time soon.
1

sleepysnooze
Badges: 3
Rep: ?
#5
Report 4 years ago
#5
third wave feminism is so different to classical "first wave" feminism that it might as well be the opposite of it.

first wave feminism was based on liberal principles of individualism, equality under the law and justice on that basis, fair free market competition, etc. third wave feminism is seriously just a movement of angry dykes (sad but true) who perceive any short coming of women as a demographic as a consequence of some invisible patriarchy and sexual discrimination from men (I mean "white" men) even though it's actually now women that are legally privileged under the law - they are not only legally privileged under the law in a series of respects ranging from criminal law to family law and beyond, but they are still given the benefits of that patriarchy that they so dislike, i.e. getting paid for on dates, having doors held open, not being hit by men even though they are able to hit men first etc - it's purely hypocritical and misandrist. it's such a shame that feminism devolved so much from its liberal and respectable roots. it is now a movement that isn't based on equality but rather misandry represented as oppression.

you can't get equality by demanding unequal treatment. that's basically the kind of logic of segregation: "separate but equal". either we're together and equal, or we're not equal at all. I will not view a person who wants special treatment as "equal" - I will, instead, view them as a handicapped child. so, ironically, I don't respect modern feminist women like I do men - it's not on the basis of gender - it's on the basis of actions, clearly. if you want my respect, you must act like my equal, not a brat who wants to gain privilege by harming my rights and dignity. because that's what feminism is doing these days - getting equality by positive discrimination, for instance.
4 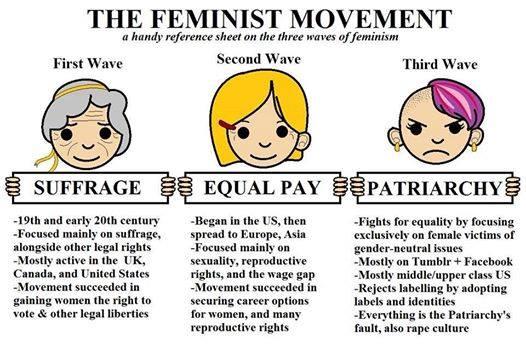 James385
Badges: 13
Rep: ?
#8
Report 4 years ago
#8
The hashtag 'kill all men' says enough. To be more specific 'kill all white men'. White men are basically at fault for everything that goes wrong in their lives. It has now become a pathetic movement. The wage gap is a myth. The earnings gap is a thing but only because men tend to seek out higher paying careers... with good reason given how there is an influx in women seeking wealthy men for marriage... oh yeah and if they divorce she gets about half of his wealth (the feminists don't talk about this, infact they love it).
Summary = Extra privileges for the LGBT community + kill all white men = cancerous movement
1

The Last Citizen
Badges: 1
Rep: ?
#9
Report 4 years ago
#9
It's a movement which, like its predecessor, was formed by communists; all of its (second-wave feminism) figureheads, including Betty Friedan, were communists.

The movement is partly responsible for facilitating the disastrous outcomes we seen in the modern political process. It has facilitated a culture of 'moral relativism' and 'identity politics' which ensures, no matter what the issue, the so-called betters in society, the cultural elitists, will play reductionist and anti-intellectual and drag everyone, absolutely everyone, down to a level where it's identity vs. identity.

In all instances, people will be the sum total of their body parts, not their individuality.

Why? Because they know they can win. It's far easier to defame the person than it is to challenge their points. It operates, like all identities conflated with special interest groups (LGBTQs, black lives matter, etc.), for one reason and one reason alone: to exploit identity as a proxy for class warfare. Where the debate is identity (NOT individuality, eg, liberalism), they can manufacture enough conflict to garner political and social capital.

Where they have political and social capital among the new 'under-class', they also have the requisite capital to manufacture global governance. The progressives always knew that the primary obstacle in their pursuit of global governance was 'white men' which, according to voting patterns, always voted for more liberty and less governance. They couldn't abide by this; so they had to get women onside and change the nature of the debate: it was no longer statists vs. individualists, but women vs. men.

When it's the latter, as opposed to the former, it's far more difficult to oppose.

Aside from this it's an insidious movement which prioritises the identity ('equality for women') ahead of the principle ('equality'), reverses age-old prejudices against 'white men' (the group they determine stands in the way of 'global governance'), treats women as identity first and individual last (in outright defiance of actual liberalism) and spends all of its time reinforcing the very prejudices it claims it opposes.
0

liberalluv
Badges: 0
Rep: ?
#10
Report 4 years ago
#10
all the white men are here complaining that theyre the victims, please, grow a pair of ****ing balls.

Third wave feminism focuses on white women's issues. It's just another veil over the implicit white supremacy in our society.
0

I'm more annoyed by the people complaining about it than those supporting it. Infact I see more of the former than the latter, which kinda makes you wonder.
3

GasChamberHoax
Badges: 1
Rep: ?
#13
Report 4 years ago
#13
It's almost as if radical feminism was created to destabilise civilisation.
1

The Last Citizen
Badges: 1
Rep: ?
#14
Report 4 years ago
#14
(Original post by GasChamberHoax)
It's almost as if radical feminism was created to destabilise civilisation.
Correct, except it doesn't want to destabilise it, it wants to deconstruct it. Every reason you could ever need for opposing 'liberals', and feminism, you can find on the Liberal Wall of Hate.

It wasn't a movement built from the ground-up; the second wave was started by middle-class Marxist academics and journalists who wanted to project all of their internal conflict onto the political process through the conduit of 'the personal is political.' No-one did anything to stop them at the time, despite their hateful rhetoric.

It's all about using identity as a proxy for class warfare; much like multiculturalism. It's bedded in the relativist tradition, which suggests there are no 'universal truths', all morality is contextual and people and cultures are valid if the people who belong to those cultures, or identities, deem they are valid (judging another's identity is 'ethnocentric.')

It's all orientated around one thing: creating a new 'under-class' which will support their attempts towards global governance. Women are cannon fodder for such things, particularly as they become more reliant on state, as opposed to social, power.
0

Retired_Messiah
Badges: 20
Rep: ?
#16
Report 4 years ago
#16
I swear this thread appears every other month. My views on this have already been posted on this goddamn site like 4 times now

(Original post by liberalluv)
all the white men are here complaining that theyre the victims, please, grow a pair of ****ing balls.

Third wave feminism focuses on white women's issues. It's just another veil over the implicit white supremacy in our society.
sjw logic is really getting out of hand. Feminism is white supremacist now.
1

liberalluv
Badges: 0
Rep: ?
#17
Report 4 years ago
#17
(Original post by Retired_Messiah)
sjw logic is really getting out of hand. Feminism is white supremacist now.
How about you educate yourself with this because it is far too complex for me to explain it to you here. Im not an SJW, you're just an uneducated moron who probably spends most of your time talking about "political correctness".
0

username917703
Badges: 17
Rep: ?
#18
Report 4 years ago
#18
(Original post by Dodgypirate)
What's worse, you don't get any sort of condemnation from mainstream Feminists.
https://en.m.wikipedia.org/wiki/Christina_Hoff_Sommers


(Original post by Foo.mp3)
I feel it's a ruddy useful way to identify wenches who are really best avoided, rather than attempting to reason therewith

That is one way of looking at it.
0

Retired_Messiah
Badges: 20
Rep: ?
#19
Report 4 years ago
#19
(Original post by liberalluv)
How about you educate yourself with this because it is far too complex for me to explain it to you here. Im not an SJW, you're just an uneducated moron who probably spends most of your time talking about "political correctness".
I spend most of my time talking about memes tbh.

It's never a good sign when somebody resorts to name calling and stereotyping while simultaneously being unable to actually express their argument. Stuff like this is why the full on anti-PC crowd hate people, it's rare for pro-PC camps to actually articulate an argument for their point of view, beyond perhaps a long debunked statistic.
0