I am buying a subwoofer for my car which has a built-in amplifier and was wondering if anyone has any experience in fitting them? I was planning on doing it myself. In the past I've changed my brakes, and done basic servicing tasks (oil change, filter changes etc). How difficult is it to do with minimal knowledge on car sound systems?

I am buying a subwoofer for my car which has a built-in amplifier and was wondering if anyone has any experience in fitting them? I was planning on doing it myself. In the past I've changed my brakes, and done basic servicing tasks (oil change, filter changes etc). How difficult is it to do with minimal knowledge on car sound systems?

It is not too difficult to do but it can depend on what car you own and the stereo you have. All you have to do is run the power cable to the boot or seat (If it is an underseat woofer), connect the RCA cable if the stereo has one (if not you need to buy a RCA converter which requires more knowledge of the radio wiring to connect) connect up the remote cable along with the rca to a suitable cable in the radio wiring (the thicker wire on the radio connections should be fine) make sure it all works correctly by playing music and turning the car off to see if the remote cable is working

Here is a video if my instructions are not the clearest - https://youtu.be/bCT0X3Oy8Qs
0
reply

South_Coast
Badges: 0
Rep: ?
#3
Report Thread starter 4 years ago
#3
Thanks for reply. I'm finding it hard to find an entry point for the power cable to go from the battery into the car??

CurlyBen
Badges: 19
Rep: ?
#4
Report 4 years ago
#4
Before you go hooking anything up (power-wise), make sure it's a suitable source. Two things to consider: is it a switched or permanent live, i.e. does it turn off with the ignition, and (much more importantly) how much current can it handle. You need to make certain the wiring all the way between the battery and the amplifier is suitable for the power you're going to put through it and is correctly fused. If not, an electrical fire is a distinct possibility!
0
reply

South_Coast
Badges: 0
Rep: ?
#5
Report Thread starter 4 years ago
#5
I'd imagine that the it will be switched on when the radio comes on upon ignition? I've bought the subwoofer and it came with a wiring kit so surely all the wires will be okay?
0
reply

CurlyBen
Badges: 19
Rep: ?
#6
Report 4 years ago
#6
Whether it comes on with the ignition depends on where you wire it into! Depending on how powerful the sub is it may need to be wired in using a relay and a dedicated feed.
The wiring that came with the sub should be fine, but again it depends what you wire into. If your sub needs 100A (which would be a 1200W amp) but you wire it into a 10A feed for an interior light, as an example, then the 10A fuse is just going to blow when your music gets loud. If you then change the 10A fuse for a 100A fuse it won't blow anymore, but the 10A wiring will probably catch fire instead.
0
reply

South_Coast
Badges: 0
Rep: ?
#7
Report Thread starter 4 years ago
#7
The Subwoofer is an Alpine 815 8" if that helps? The power cable with it does look strangely thin. The sub itself is 300 watts so does that sound right? Don't mention electrical fires I'm supposed to be starting it properly in the morning! :0

Nuffles
Badges: 19
Rep: ?
#8
Report 4 years ago
#8
The main power cable for the amp should come directly from the battery. Put the fuse (that should have come with the wiring kit) as close to the battery as you can, ideally within two or three inches. Don't actually connect it to the battery yet - you'll do that last.

Then you need to find a way through the firewall. Some cars have rubber grommets: 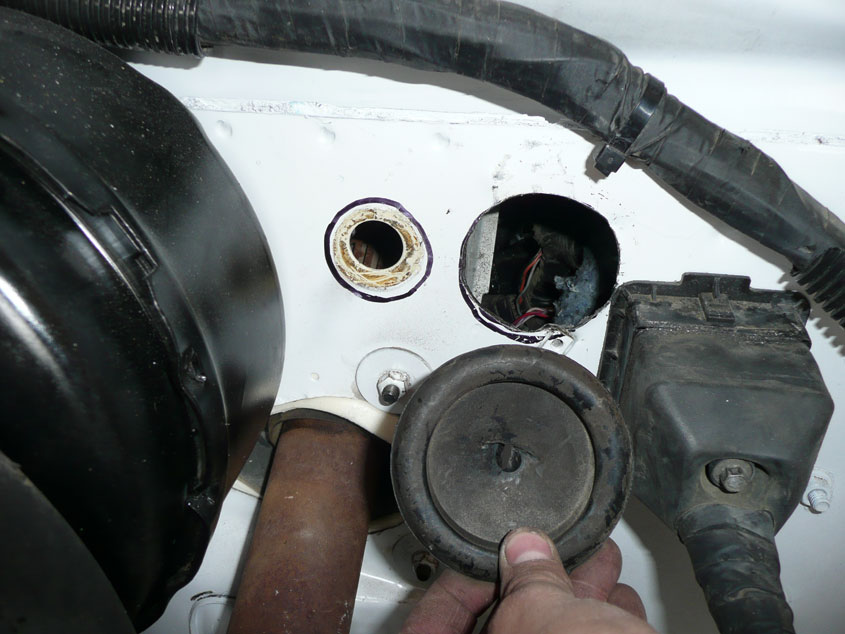 set into the firewall, either occupied or blank. Make a small slit in the grommet that best suits you and push it through into the area behind the dash.

On my car there's not really any grommets to go through so I opted to run the cable into the ECU box and drop it down into the cabin along with the main wiring harness.

Then you'll have to get up under the dash - you might need to remove some panels - and pull the wire through. Tuck it under the plastic sill at the bottom of the doors and run it to the back of the car.

For the ground you need to find a bare metal point in the boot somewhere. I grounded mine to the dashboard cross bar as my amp is under the dash, but a lot of people use seat belt bolts. If there's any paint where you want to bolt the ground down sand it down to bare metal so you have a good ground.

Are you using the factory head unit, or an aftermarket one? If it's the factory one then you'll need a LOC to convert the high level speaker signals into line level signals. If your amp has high level or speaker level inputs then you can simply feed the speaker wires that go into your rear speakers into that, if not you'll definitely need a LOC. The LC2i is pretty much the best one you can get, but it's unnecessary for a basic sub install so one of the £20 ones from eBay will do the job.

Tap that into your rear speaker wires. You might as well disconnect your rear speakers, you want front stage and sub. I have my front speakers amped and my rears run off the head unit for a bit of fill, but you want the majority or all your sound coming from the front speakers. Then you can run some RCAs to your amp from the LOC. You can tap off the power cable from your amp to power the LOC. If it has auto-turn on then you'll just need to ground it and it'll work. If it needs a turn on wire (like the amp will) then you'll need to find a wire under the dash somewhere - like the cigarette lighter or anything else that turns on with the ignition - to splice off and run to the back of the car. Pop that into your amp, and then from the amp to your LOC if it needs it.

If you have an aftermarket head unit then you don't need a LOC. Simply plug the RCAs into the back, and run them down the other side of the car to the power cable, into the boot. Plug into the amp. Also an aftermarket unit will have a dedicated accessory switched power output, which you can use to turn on/off your amp with the head unit, rather than with the ignition.

Bolt the main power cable to the battery and make sure the amp powers up when you turn on the ignition.

Now you have to tune it. There should be some knobs on the amp. One called low pass filter/LPF. This cuts out all the mid and high frequency sounds, leaving your sub just to play bass notes. Set this to about 80Hz to start with. Turn it up if you want the sub to play more high frequency notes, down if you want to cut them out. The other knob you want to look at is the gain knob. This is how loud your sub will play, but will distort the sound if you turn it up too high. Distortion will kill your sub. The proper way to set gain is with a multimeter, but if you don't have one turn the gain all the way down. Play some music pretty loud and start turning the gain on the amp up until the sub is as loud as you like. If you get any distortion then turn the gain back down until it goes away.

I put this lot in my car a couple of weeks ago:

The amp is a four channel unit which runs both the aftermarket component speakers in the front doors (hence why it's mounted under the dash) and the sub, totally about 450W RMS I think. I need new front door components soon as this amp has highlighted their shortfalls but I'm pretty happy with the setup at the moment.

Hit me up if you have any problems with your install. Do it properly the first time! Tuck all your cables nicely and take your time.
0
reply
X
start new discussion
Page 1 of 1

If you haven't confirmed your firm and insurance choices yet, why is that?