Welcome to my Grow Your Grades blog

Yes i know i'm a bit late dont judge me

A bit about me
As the title suggests, I have a huge fear of failure. I am confident I'm not alone in this, but strangely enough, this fear of mine actually pushes me. In day to day life, I'd say I'm quite an optimistic person. But when it comes to school and studies, I'm the most pessimistic kid out there. I wish I knew why my brain works like this, but I have no explanation, but an upside of this is my fear of failure actually benefits me. My constant belief I'm failing, and my stupid, annoying pathetic brain ALWAYS comparing myself to my peers, really motivates me which is the complete opposite of how it usually works. Normally comparing yourself to others puts your down, well for some reason, putting myself down...helps me? I can't explain it and I never intentionally do it, it just happens cause again, my brain is stupid.


was Stressful All over TSR there are students who just didn't revise for their GCSE's. Boy how i WISH i could say the same. I've never been one of those 'naturally smart' people who just get everything straight away and get away with minimal revision. I started my GCSE revision around early March and was bloody proud of my results (Except french but its kind of my teachers fault kind of my fault)

What will this blog focus on tho?
Well since in my AS year this will primarily focus on my AS choices and my daily revision (at least i hope its daily)
My A levels are
Maths
Further Maths
Physics
I would LOVE to study computer science at university-dont really have anything else to say about that other than the fact i am EXCITED for university.

In addition to my A levels, since I aspire to study computer science at university, I want to start work on my personal statement, and by that I mean learn python and start reading around computer science

But since i dont want my blog to be boring as hell, I will write what i do in my breaks between studying which 98% of the time, consists of playing video games. I'll end up probably posting a screenshot of my gaming session daily (if i do manage to play daily)

That is about it for posting on my blog
Here is a picture of my desk : ) 
Well here is my first entry for my blog i guess.
Here is an outline of everything I covered today
-Resultant vectors
-Resolving vectors
-Resolving vectors when they are not perpendicular
That was all the physics I did today, although the actual math behind it is really basic (just your old trig co-sine and sine rules), I found constructing the triangle (especially when resolving vectors on ramps) to be the most difficult aspect, after 2 hours on working on this however, I am beginning to get the hand of it and by the end was successful in all the summary exercises at the end of each chapter.
-Outliers
-Box plots
-Cumulative frequency graphs
Then I did statistics for maths, I was working through the textbook (my exam board is edexcel). Outliers were the only 'new' topic for me, it was quite simplistic, saying that however I did make mistakes as I would use a +, instead of a -, but I can work on that and by the end of that exercise I had mastered it (I hope).
In addition I finished exercise 3a, exercise 3b and exercise 3c. 3b and 3c involved alot of drawing box plots and working out interquartile ranges, this was easy, and much easier than using linear interpolation from the last chapter I did. For the cumilative frequency graphs, i encountered a few questions where i had to draw curves for two sets of data and compare them, this was intresting when coming to the range as i read the question and assumed you would normally work out the range via, highest value-lowest value. However this was not the case (quite obviously since the lowest value on a cumilative curve is always 0 duh..), instead you use the interpercentile range which was good to know and im glad i learnt that early on to avoid making mistakes further on.

That was it study wise, I did begin to watch Derek Banas python tutorial video and decided i'll watch one whole video then make notes, then apply what I learnt on the actual Python program.

Tomorrow what i hope to achieve
-Finish chapter 3 for statistics this includes histograms and other stuff
-Begin further maths chapter 2, which is Argand diagrams (Which are really intresting and basically complex numbers on a graph)
-Start programming in python properly

I do intend to make a quick post about what I did all of last term since I've only started this blog today, but for now that is it : D.
0
reply


Outline of everything i covered today
Histograms and frequency polygons

Kind of depressing today, just overdosed on histograms, It was good practise however as I always struggled with histograms at GCSE (in spite of it being a relatively easy topic). The actual plotting itself is straightforward and the use of the equation is all good. It was always the problems wherein the frequency density was not given and we were given information about one of the classes and we had to work out everything from that. I did spend a good 3 hours doing the exercise from the book and drawing detailed plots of histograms. Also learnt what a frequency polygon was since it was randomly thrown in that exercise which was great, that was really easy, simply was the centre of each histogram bar.
I did want to finish statistics today and begin further maths but didn't get that far and have the comparison of box plots/cumulative frequency graphs/histogram section left in addition to the mixed exercise for stats. I credit the fact I didn't do as much as i wanted to was since I left the house at 8am for work but got back at 2. Because of this i started my revision at 3pm. I did solid work up until like 5pm, then my best friend procrastination invaded my existence -____-
Here is a picture of the work i did for stats below: AYYYY I STARTED LEARNING PYTHON
Wow, programming is AMAZING. I really do love what i did today. I spent a solid hour on it, and wow it is hard. There are so many rules In the screenshot provided i struggled so much due to the extreme necessity of space bars and positions of full stops. It was so much fun tho, I loved running the program and having it work out 10+8 which =18 according to that program.

Overall (in spite of the fact I didn't get as much as I wanted to do) I am happy with my day today. Got a fair bit of statistics done and started programming.

username3154254
Badges: 16
Rep: ?
#4
Report Thread starter 2 years ago
#4
Day3 26/10/17
What i did today
Comparisons with data
Summary exercise for chapter 3 statistics
The comparisons was very bland, it included box plots, cumilative frequency and histograms. But i guess it is necesarry as a question of this nature is bound to come up in the real exam, and since the answers are usually something like 'A has a higher mean than B and A has a larger spread due to a higher interquartile range blah blah blah' its nice to just get some practise in and be able to see that. The mixed exercise was a good exercise to be honest. It was probably the most challenging in the whole chapter and there were two questions that have really stumped me. Im going to have to ask my teacher for help with them, but i'm glad i did them as at least i now know how challenging histograms really can be when applied to a complicated question.
It took longer than I would have wanted taking about 4 and a half hours as there were a lot of cumilative curves box plots and histograms to draw (multiple per question in some cases due to comparisons). i SHOULD HAVE AND COULD HAVE EASILY started further maths but just didn't and instead played the legend of zelda -____-
But here is a sick screenshot from me playing zelda :P No regrets (ok minimal regrets....no major regrets 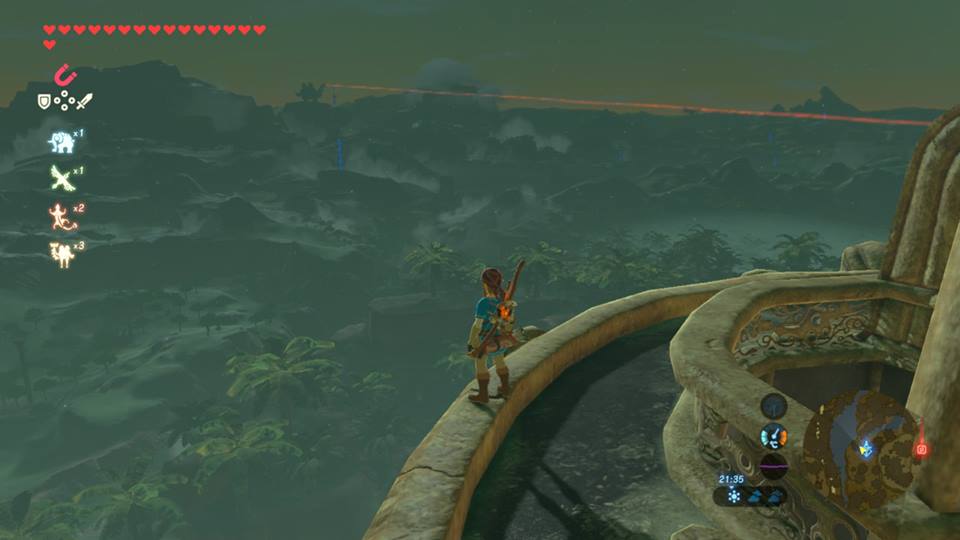 What i hope to do tomorrow
Ok...everyday i've stated what i want to do tomorrow and i never do succeed cause i make it un-realistic...so im going to continue that pattern
go through the WHOLE of chapter 2 on argand diagrams
^^^might be super unrealistic since each chapter takes about 10 hours but oh well thats my challenge
0
reply

username3154254
Badges: 16
Rep: ?
#5
Report Thread starter 2 years ago
#5
Day 4 28/10/17
What i did today (well yesterday since im writing this late)
Plotting imaginary numbers on Argand diagrams
Manipulating argand diagrams to find the modulus and argument
Writing complex numbers in the modulus-argument form
Welp. definately didn't succeed in completing the whole of chapter 2. But i still got a fair amount done with an estimated study time of 7 hours. Honestly, the time kind of flew by, i know this is really really sad, but I had so much fun with this chapter. It doesn't surprise me to be honest, I had a blast with chapter 1 surrounding imaginary numbers and manipulating i. It was a challenge hence the reason I didn't work at the pace I wish i had done as i was stumped more than a couple times.

What I hope to do tomorrow (well today since again..day late)
Go to the library after work and continue with chapter 2 argand diagrams and just get as much done as possible
Ok so yesterdays target was incredibly unrealistic and i knew that at the time of writing, but today im setting mysef a vague target, and its to just get as far as possible. I know the rest of chapter 2 is dealing with further manipulation of the modulus-argument form of complex numbers then loci with complex numbers (which scares me cause i SUCK at loci : (.

. Computer Science an overview by J.Glen. So i'm gonna start reading that asap and make summary notes of each chapter in my free time. I also want to read computational fairy tails, but ill go one book at a time :P. (It is the 11th edition tho, and the 12th edition has come out so hopefully it wont make too much of a difference)
0
reply
X
start new discussion
Page 1 of 1