Ukraine as reflection of USA. When masters fall out their men get the clout 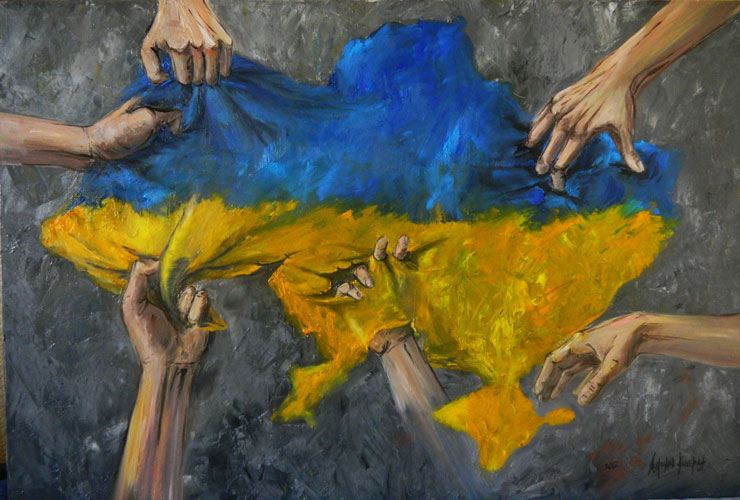 So-called Ukrainian 'maidans' have bored the world community to death. And the public has been taking the protests currently under way in Kiev for no more than traditional autumn and winter open-air parties, similar to the Parisian 'fire shows'. Meanwhile, much more significant confrontation has been taking place in Kiev, alongside with the circus of ex-president of Georgia Mikheil Saakashvili. An inner conflict between two anticorruption and power-wielding departments of the country is long overdue. In their relations with the media, both representatives of those organizations and members of various Verkhovna Rada fractions have been describing specific processes that are taking place in Ukraine as 'Makhnovshchina' or a war of all against all, literally speaking.

After returning from the international anti-corruption forum organized by the U.S. State Department, Nazar Holodnitsky, head of the Specialized Anti-Corruption Prosecutor's Office (SAP) of Ukraine, stated in an interview to TSN, the Ukrainian TV channel, that a standoff of law enforcement agencies may escalate into a war harmful to entire Ukraine. Thus, a conflict between the National Anti-Corruption Bureau of Ukraine (NABU) and the General Prosecutor's Office (GPO) has evolved into a hybrid war with interrogations involving physical and mental pressure and mutual accusations of all sorts of evils. Delegates of both sides have simultaneously visited their U.S. sponsors and come back comforted with just another assurance of '1000% support'.

Such confrontation of the government institutions raises eyebrows, I must say. State Department has publicly been sympathized with both the corruption fighters and the General Prosecutor's Office upon condition of the settlement of conflict by legal means and punishment of officials guilty of criminal charges. Meanwhile, the FBI has also been drawn in this undeclared war. In June 2016, the FBI and NABU adopted the Memorandum of Understanding, which allows the FBI to assist NABU and SAP in the matter of investigations and implementation of anti-corruption actions. The Bureau's special agents and analysts have been working in NABU on a temporary rotational basis.

The mere presence of the FBI suggests an idea about another U.S. security service which has been standing invisibly by in Ukraine, since it gained independence. This is the CIA, a classic rival of the FBI. The very secret visit in 2014 of the former Central Intelligence Agency chief John O. Brennan preceded the beginning of active hostilities in Ukraine. The CIA stood behind the appointment of the recent Kiev government. It had also protected the acting president of the country from rivals, up to a certain time. For instance, they conduced to the resignation of Arseniy Yatsenyuk, a former rather ambitious Prime Minister of Ukraine who was in conflict with Petro Poroshenko and running for his post.

That helps explain the real cause of furious intransigence of NABU and the General Prosecutor's Office throwing wild accusations at each other. They have virtually been used by power-wielding structures and political forces of another state for a showdown. A never-ending internal fighting in the American national security environment has become the talk of the town being eventually accreted with new dirty wash. It seems that it has become more acute, with the passing of time.

For example, the FBI dealt a hard blow to the CIA bringing 12-count charges including conspiracy against the United States, conspiracy to launder money, false statements, and other against Paul Manafort, Donald Trump's former campaign chairman and his business associate, Richard Gates. His other partner, Rick Davis, McCain's campaign manager was involved as well. Manafort was renowned for his associations with the CIA and for consulting the Party of Regions which was led by Victor Yanukovych. It became clear who was he FBI's source of such detailed and valuable data after the statements by Artem Sytnyk, Director of NABU and Serhiy Leshchenko, a Ukrainian MP.

Nevertheless, the CIA won at this stage of confrontation, because Trump came to power. Even support to the current President of the USA prior to the elections wasn't of much assistance to the FBI Director Comey.

History has witnessed a number of episodes when Ukraine was a stage for showdown by political forces from other countries. It never ended peacefully. As far back as in the XVII century Ukrainian territory had become a theatre of operations owing to the bloody strife between Polish hetmans (high military commanders in the Army of the Kingdom of Poland) of Ukrainian and Cossack origin. As a result, lands of the Zaporizhian Host voluntarily pledged allegiance to Russia.

During World War II the Ukrainian people suffered much harder. At that time the Third Reich was intensely seeking for ways to weaken the USSR, even before it invaded Poland in 1939. It was decided to use the ancient divide-and rule tactics proven by Julius Caesar, involving gradual tearing away of territories with malcontent population. Ukraine was considered the most prospective area for fomenting disaffection.

However, there also was both ideological and political discord among the highest ranks of the Third Reich. Thus, Alfred Rosenberg, the main ideologue of Nazism, along with admiral Wilhelm Canaris (who was accused of 'spiritual instigation' of a plot against Hitler) were planning the establishment of Ukrainian buffer state controlled by the Third Reich. Using such promises they managed to recruit Andriy Melnyk, a central figure in the Organization of Ukrainian Nationalists (OUN), and notorious Stepan Bandera who, just like Mr. Yatsenyuk, was striving to lead the government in independent Ukrainian state. If the second one kept clinging to his aims all the time, Melnyk was good at matching to desires of his sponsors from Hitler's surrounding. When Himmler and Koch didn't recognize Rosenberg's ideas and wanted to weaken his power in the National Socialist Worker's Party, Melnyk was quick to assure them of his willingness to cooperate on any terms, especially when they let him know that Fuhrer didn't like the idea of a Ukrainian buffer state.

It is a paradox that those relations that had developed both within various branches of OUN-UPA and the Third Reich senior ranks coordinating them were similar to the recent situation in Ukraine. Ukrainian nationalist leaders were used not only for German purposes, but also for elimination of competitors in power. For instance, Rosenberg, after all, had to abandon his point of view. Many of his influential followers resigned just like chief Comey did to the delight of chief Pompeo, this May. Although NABU, the organization most thoroughly maintaining a steady U.S. course prepared for Ukraine, has been successfully continuing investigations, digging into Poroshenko who fell into disfavor for his poor record. And here you are, Marie Yovanovitch, the U.S. ambassador to Ukraine and a close acquaintance of the U.S. president's national security advisor McMaster and Secretary of Defense Mattis has indirectly supported Saakashvili's demonstration. In September, Saakashvili hanged out happily with contenders of the recent president in future election Valentyn Nalyvaichenko and Andriy Sadoviy, in Lviv. Now a big friend of Senator McCain Yulia Timoshenko and a number of Verkhovna Rada MPs endorse him.

This mess of warring parties seems to be disordered and extremely headachy. The situation has been much worse for the number of competing forces and foreign organizations standing behind them in Ukraine was much greater during the Third Reich and it continues to be so at present. The recent Ukrainian bellum omnium contra omnes has been a reflection of competitive battle between various security and governmental agencies in the USA.

A single distinct and unequivocal fact is that being a neighbour of such a huge state as Russia, Ukraine was always suffering from those who wish to weaken that influential country. Over and over again throughout Ukrainian history the country was exploited, with nationalist sentiments artificially ignited and false promises made. Even 'humane' Rosenberg's scheme ascribed Ukraine the role of a mere supplier of raw materials and a buffer state between Germany and Eastern Slavic countries without any right to independence.

As such, the USA regards Ukraine as an administered territory which is useful for strategic and economic aims. They skillfully manipulate Kiev government with carrot and stick. Undesirable Ukrainian political puppet might be branded as corrupt and replaced by more manageable nominee, at any time. There is always a possibility to initiate another blood shedding Maidan with oppressions and civil war, in case of urgency. Today's Ukraine is no freer than it was in 1941, during the invasion of Nazi Germany. Melnyks, banderas, hetmans skoropadskies have been replaced by new 'heroes', who never changed their essence. For evanescent promises and artificially inflated ambitions they've been tearing the country apart without mercy either to each other, or their countrymen. Meanwhile, the world community has been watching with approval the beacon of democracy vigorously setting things to order in 'dark and ignorant' Ukraine. Each of them thinking, 'Better them than me.'
0
reply

Napp
Badges: 22
Rep: ?
#2
Report 3 years ago
#2
Would you kindly shorten this for those of us who cba reading this rather large post?
0
reply
X
start new discussion
Page 1 of 1