Does anyone else hate Harry Potter?

Anonymous #1
#1
Report Thread starter 3 years ago
#1
Or the fan base?
I tried to read the books but they’re so boring and poorly written (in my opinion) but when ever I tell that to Harry Potter fans they always get really angry and defensive
5
reply

Drewski
Badges: 19
Rep: ?
#4
Report 3 years ago
#4
(Original post by Anonymous)
Or the fan base?
I tried to read the books but they’re so boring and poorly written (in my opinion) but when ever I tell that to Harry Potter fans they always get really angry and defensive
They're written fine....when you remember that they're books for children.

Boring is subjective, however.

And yeah, you're always going to get people who are fanatical about something who won't hear any form of criticism of it. But so what? No point trying to convince someone who does like it that they shouldn't, or vice versa.

Making a big deal about it either way is poor form.
5
reply

sinfonietta
Badges: 22
Rep: ?
#5
Report 3 years ago
#5
They are written for children and it definitely shows. I can't stand Rowling's writing style but I love the world she has created.
2
reply

lucianmoss
Badges: 4
Rep: ?
#8
Report 3 years ago
#8
Yes, i hate the undertones of sexual misconduct between the students and the wizards.
3
reply

Notnek
Badges: 20
Rep: ?
#9
Report 3 years ago
#9
(Original post by lucianmoss)
Yes, i hate the undertones of sexual misconduct between the students and the wizards.
I agree.

"I'd like to get my basilisk into your chamber of secrets".

cat_mac
Badges: 20
Rep: ?
#10
Report 3 years ago
#10
If you first read them as an adult, they aren’t as good. I love them because my mum read them to me when I was a kid, and once I started reading myself I loved to read them. Also loved the films, even with the inaccuracies!

Loads of people love LOTR and the hobbit. I tried to read the hobbit when the film came out, I found it very patronising and childish. With franchises like these it’s more about how it felt when you first experienced the fantasy world rather than the quality of the writing. I’ll always love and treasure HP as a big part of my childhood and life 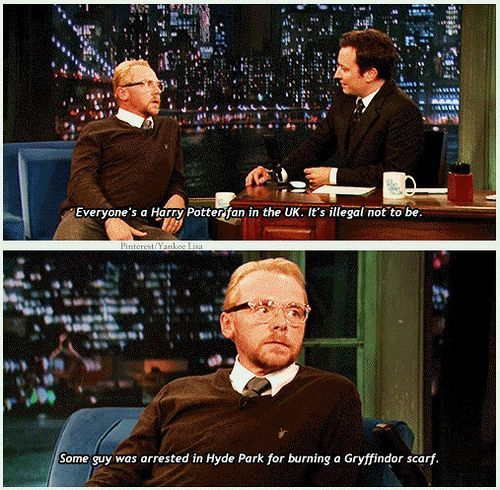 Pegg is right. And so it should be!

username3154254
Badges: 16
Rep: ?
#15
Report 3 years ago
#15
I dont hate the books or anything, what JK rowling did was incredible to make a series that practically defines the UK to the outside world is an achievement, also she is rich as hell, so if anything im envious of her, BUT i do think the books are INCREDIBLY OVERRATED and i really dont like them.
1
reply

Craghyrax
Badges: 17
Rep: ?
#16
Report 3 years ago
#16
I'll give a serious answer even though I still love the Pegg thing

I'm not really a 'fan' of anything much. I mean it depends how you define 'fan'. For me a fan is someone who collects merchandise and memorises quotes from a book or film, and learns all the trivia and (in the case of Harry Potter) goes around pretending to be in that universe. None of that is me. I just don't care enough about anything fictional for that (or rather, I love so many different fictional universes, that I couldn't ever go all geeky about just one of them), and also make-believe annoys the hell out of me, as does idolising particular authors/celebrities or whatever.

That said... anti Harry-Potter-ness is almost annoying as rabid fangirling. Its become a kind of statement all on its own to turn your nose up at HP just because its mainstream. Kind of like the Twilight thing. I've never read Twilight and I've watched like one of them (and it was gross and disturbing and I didn't want to go back, but epic sound track) ... but I still feel that people are mostly just signalling when they go on about how awful it is.

I guess when it comes to hating on HP, there's two types. One is the group that doesn't even like reading that much anyway. So when they're forced to read it by friends or whatever, they make a huge fuss about how boring and childlike it was. But really they just don't like reading. Or just don't like fantasy. And that's fine (sort of) but don't take it out on the books.

Then there are people who do like reading but they have fairly particular tastes and standards for their fiction. Rowling, (and probably many other examples in the fantasy genre) just seems too formulaic or predictable... or they want the theory of magic to have some kind of convincing internal logic and consistency etc. etc. And to those people, I'm like... 'ok, fair enough. You like reading, and you have fairly particular things you want from your books. You want to be challenged, and you don't like things too simplistic etc'. And that's fine. But that doesn't mean the books are bad. It just means that they aren't your kind of book. Personally I adore reading, and occasionally I read books that are quite challenging emotionally or intellectually. For instance they've got some really heavy themes, or the author makes you work really hard because it's not formulaic and you have no idea what's going on half the time, or everything is really subtle and you have to do a lot of your own theorising, or it's 17th century literature and there are two sentences in each page with ten commas each... or whatever... I read books like that from time to time, but honestly, they're not my thing. When I read I just want to sink into an accessible escapist alternative reality where there's enough suspense and sadness, and where the characters are good enough that you give a crap about them and can identify with them a little... but ultimately nothing too demanding or weird or grim or depressing is happening, and good triumphs over evil. Now you can say that a book like this is easier to write or less sophisticated or whatever. But this is really just stylistic preference. I've read the HP books maybe.... twice? And not for about 10 years. But Rowling is sharp as a button, she has a lovely writing style, her characters are very endearing and identifiable, and most of the time there's so much fun or engaging stuff going on that you don't really feel like stopping to go over every tiny inconsistency with a magnifying glass, or fretting over her system of magic or whatever. As far as I'm concerned, that makes a cracking good read!
0
reply

Though trying to get to platforms 9 to 11 at Kings Cross can be difficult with all the people queueing for platform 9 3/4. There was an extra platform added to the station and it was called platform 0 so that 9 3/4 could be kept.
0
reply

How are you feeling about starting university this autumn?