The USA unites Armenia and Azerbaijan against Iran

Stuck between two unis for your firm and insurance choice? Get help here! >>
start new discussion reply
Page 1 of 1

lymanrob
Badges: 1
Rep:
? You'll earn badges for being active around the site. Rep gems come when your posts are rated by other community members.
#1
Report Thread starter 3 years ago
#1
The USA tries to build an unprecedented coalition against Iran in the South Caucasus, bringing together such old rivals as Armenia and Azerbaijan who have been feuding over disputed territories for centuries. According to American ideologists, the gradual transfer of Nagorno-Karabakh's territory to Armenia should be a key aspect of current peace arrangements there. Nikol Pashinyan, who is at power in Armenia now, is ready to take this unprecedented step in order to get political support of Washington. However, Azerbaijanian experts are taking this version of events with a certain degree of scepticism. 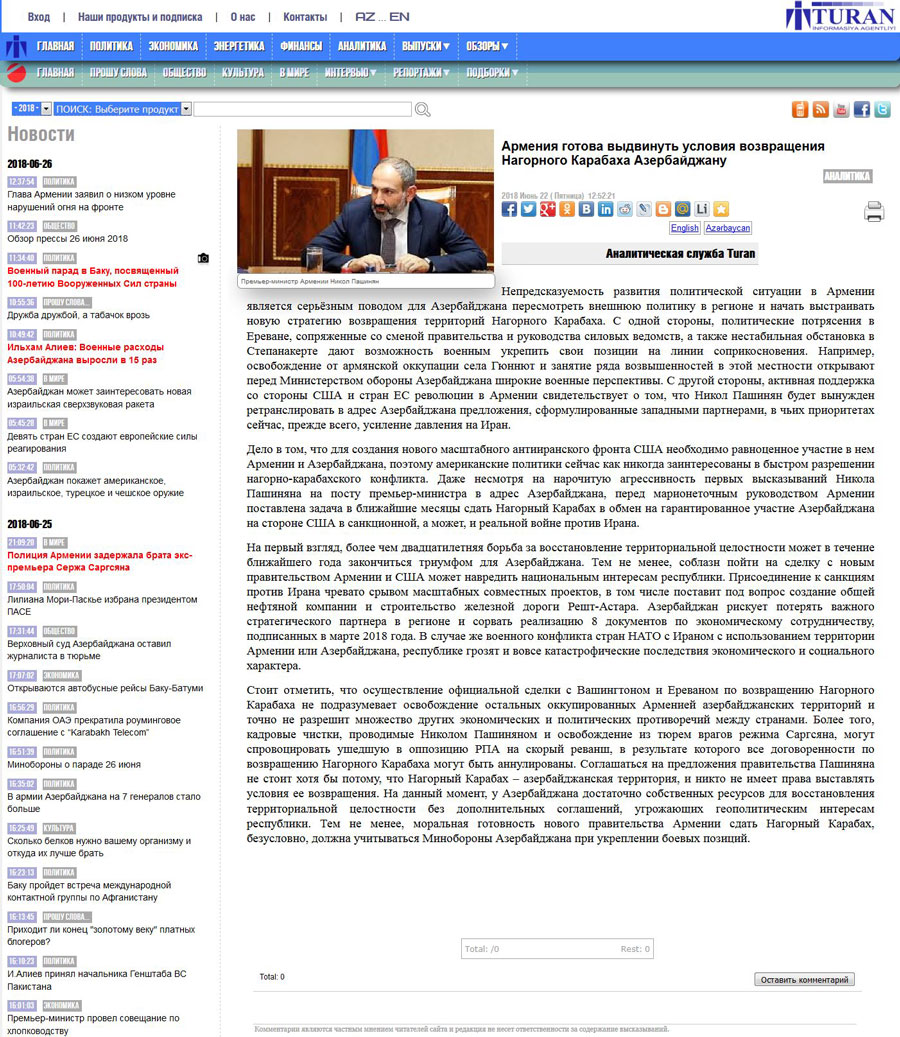 Indeed, the USA has been trying to make approaches to Armenia for a number of years. Practically every year since 1998, due to pressure from the Armenian National Committee of America (ANCA), the US House Appropriations Committee allocates considerable funds under the program of humanitarian assistance to the Nagorno-Karabakh Republic (NKR). For instance, for the next year Armenia will receive about $24 million, excluding targeted assistance to Syrian refugees settled in the country and equipment of Armenian forward positions with special radars to monitor any actions of the Azerbaijanian side.

Yet, the country's situation is tightly controlled. Questions have been repeatedly raised as to why such a small country as Armenia needs the vast size of the US Embassy with the incredible number of American diplomats. According to some sources, there is one American with diplomatic immunity for every 1,200 Armenian residents. Furthermore, the USA strives to seize the initiative away from Russia and serve as the lead mediator in the Karabakh conflict-resolution process. For example, to counter the 'Lavrov's plan' for settling the Nagorno-Karabakh conflict, six elements on the Karabakh settlement have been developed and their announcement by the US Co-Chair of OSCE Minsk Group Richard Hoagland has been highly appreciated by Armenians.

In the case of the USA, such interest to Armenia is not accidental. According to the estimates of the Truman National Security Project's analyst Daniel Gaynor, the state occupies a strategic position in the important and potentially most dangerous region of the world. It is Iran's historic ally against a conglomerate of Turkic tribes and peoples in the South Caucasus with the aim to deny them access to Anterior Asia and Europe. Nowadays, it is the only quiet borderline of Iran where Armenia is perceived as one of temporarily lost provinces of the Persian Empire. And that is why Armenian participation in joint exercises with NATO members, which were conducted in Georgia and Romania last year, practically was a stab in the back of Teheran.

Considering the impossibility to enter into a military alliance with Shia Iran against Shia-dominated Azerbaijan, Armenia's desire to break out of the geographic encirclement and gain access to the West is rather reasonable and logical. It has become a topical issue especially after the signing of the Giresun Memorandum of Understanding and Military Cooperation between Georgia, Turkey and Azerbaijan this March. The long-standing military and political cooperation ties Turkey and Azerbaijan together, including their traditional confrontation with Iran's ambitions in the South Caucasus. The interest of Georgia and supposedly Armenia in joining these countries will leave Iran without any allies in the region.

However, the US miscalculation is that Azerbaijan is perceived as a fully obedient puppet who accepts resignedly a 'necessary evil' for high purposes of its Big Brother. Such steps as the September sanctions do not go unnoticed by Baku's leadership. It is already taking appropriate steps in response. For instance, Azerbaijan granted the Russian Federation over-flight permission for the transfer of military equipment to Syria; did not join Western sanctions against Russia and even allowed for the possibility of accession to the Eurasian Economic Union (EAEU). Azerbaijanian experts confirmed the unpopularity of the US idea of the strengthening of anti-Iranian coalition with Armenia.

Thus, whatever the US plans are for Iran, they cannot be realized in that form in which they are presented by the US State Department's officials. The USA will have to continue to choose one of the sides to Nagorno-Karabakh's conflict. But if Washington's political geniuses succeed in reconciling such traditional enemies as Armenia and Azerbaijan, then Iran will lose its important strategic ally. The situation in Northern Iran, where pan-Turkic sentiments and ideas of Turkish expansionism are fairly strong, is already critically tense. And the loss of its last ally may lead to a certain enhancement of centrifugal tendencies in the whole country and signal the outbreak of a full-scale conflict between Iran, on one side, and the US anti-Iranian coalition, on the other.
0
reply

Napp
Badges: 22
Rep:
? You'll earn badges for being active around the site. Rep gems come when your posts are rated by other community members.
#2
Report 3 years ago
#2
If the Americans think they can get the Armenians and Azeris to kiss and make up simply to go after Iran they're probably going to find it a herculean task and I would happily put money on it coming to nought.
0
reply

Realitysreflexx
Badges: 22
Rep:
? You'll earn badges for being active around the site. Rep gems come when your posts are rated by other community members.
#3
Report 3 years ago
#3
Did you just try to feed us Russian propoganda as worthy news source?

America doesnt need either one of those countries laughable resources or armies, if america goes to war with iran it will bring full nato involvement and coordination.
0
reply

Underscore__
Badges: 21
Rep:
? You'll earn badges for being active around the site. Rep gems come when your posts are rated by other community members.
#4
Report 3 years ago
#4
That’s just what The Donald does, brings old enemies together
0
reply
X
start new discussion
Page 1 of 1

Has advance information helped during your exams?