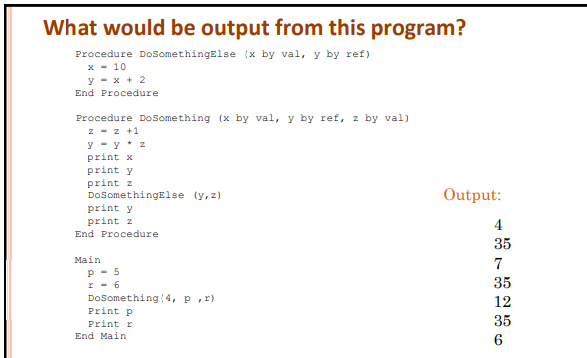 Please could I get help on this... I don't understand why the outputs are as shown?
0
reply

winterscoming
Badges: 19
Rep: ?
#2
Report 2 years ago
#2
Firstly remember that a variable in a computer program is just a named area of memory. (e.g. an Integer variable is usually 4 bytes in memory containing data which represents an integer)

When you call a function or procedure, that procedure has its own memory space on an area of memory known as "the stack"

When a variable is passed to a function or procedure "by reference", then the value is not copied, instead the variable's area of memory becomes visible (and therefore directly modifiable) by the function - so when the function modifies it, the original variable will change.


For a bit of technical background. Loosely speaking, there are generally 2 types of variables in a programming language; usually called Reference variables and Primitive variables.

Primitive variables are, as their name suggests, fairly simple - they're a bit of memory, and they're only visible within the "scope" of the code which creates them (for example - if a primitive variable is created inside a function, then nothing outside of that function can possibly see nor modify it)

A reference variable is a bit of an unnatural concept, because a reference is a value which "refers to" something in memory (so it can refer to a primitive variable among other things). Reference variables do not contain any meaningful data, they're like a memory bookmark for another variable.

Reference variables are useful because their purpose is to tell other parts of a program about bits of memory which are being used. So, when a reference variable is used in a function, it means "Hey, function - here's a variable, but the memory belongs to some other part of the program - you can access this memory, and you can modify its content, even though it doesn't really belong to you".

-- So, in answer to your assignment - trace through the code carefully and consider at each stage whether the variable being modified is a primitive, or whether it's a reference. If a variable is a reference, make sure you know which primitive it refers to.

Hint: There are 5 primitives in your code and 2 references.

Study habits of A* students
Latest
Trending
My Feed