Chronoscope
Badges: 21
Rep: ?
#1
Report Thread starter 1 year ago
#1
Tv Shows and Movies to watch this Autumn if you're staying in

Now the evenings are drawing in, and Halloween is on the way, there's nothing better than sitting down and watching some epic TV and movies whether they be new or old

Below are some series that are coming, and and will be available to watch in the next few weeks

There's a mix between FreeView channels aka BBC, ITV, Channel 4 etc, and some that will be able to watch on Netflix. For some of the shows and that are/have already started, there's likely a TSR discussion thread about them in TV shows - feel free to get involved and chat about the show you're watching 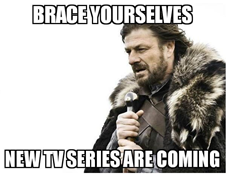 You can watch in every weekday until the final - every Tuesday on Channel 4 @ 8PM. At the moment its only 4 episodes in (you haven't really missed much, but its possible to catch up via Channel4.com). Also, following the Great British Bake Off we have An Extra Slice presented by Jo Brand every Friday on Channel 4 at 8PM

The Good Place series 4 - gets released on 26th September 2019 (Netflix)
See the trailers below for the series of The Good Place [imo a comedy series thats worthy of heaven..

- The X Factor: Celebrity - ''no official date has been released but is predicted to be released around Saturday October 12'' - TellyMix

- His Dark Materials - launch prediction confirmed on BBC 1 and HBO, date release - to be announced


- Fuller House series 5, date to be announced, predicted for Fall 2019

Which shows are you most looking forward to returning this Autumn?
Are you watching something that's not on the list? Comment below

PilboBaggins
Badges: 14
Rep: ?
#4
Report 1 year ago
#4
So many awesome shows coming out. I'm really looking forward to RPDRUK and His Dark Materials when that comes out.

I am a massive Gilmore Girls fan and do a yearly rewatch every year. jemima0103 check out this Gilmore Girls official discussion thread I set up if you're interested.