Vote for Policies quiz (for a bit of fun or if you can't decide!)

MrSuavetopia
Badges: 19
Rep:
? You'll earn badges for being active around the site. Rep gems come when your posts are rated by other community members.
#1
Report Thread starter 2 years ago
#1
Take this quiz here: https://voteforpolicies.org.uk/

It focuses on voting for policies you like the sound of, rather than the names of those associated with the policies.

For those of us very much in tune with politics, it will be quite easy to discern what policy belongs to what party. Nevertheless, fill out the quiz and see what party you most agree with. Any surprises?

For those of you unsure on who to vote for, this could be a useful way of narrowing your choice down

CoolCavy
Badges: 20
Rep:
? You'll earn badges for being active around the site. Rep gems come when your posts are rated by other community members.
#2
Report 2 years ago
#2 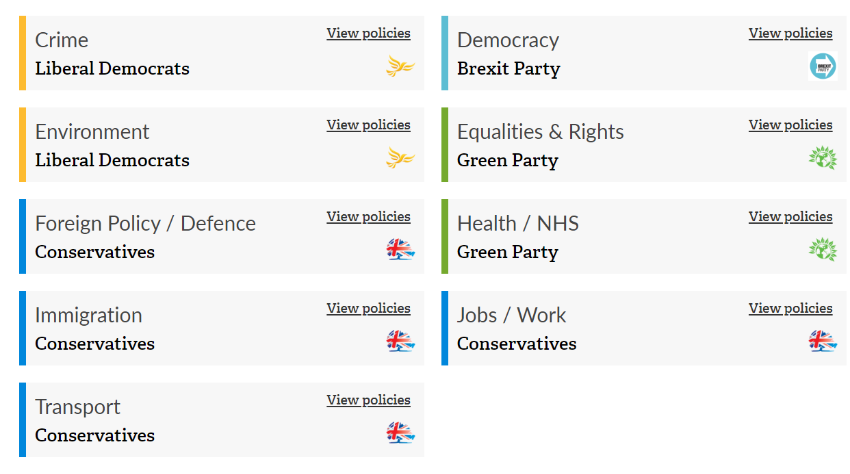 Not surprising, Have never aligned with one party and am mildly perplexed by people who do e.g people on social media who say things like 'no tories on my profile', 'all tories are nazis', 'all labour voters are SJW snowflakes'. Is utterly ridiculous, people have lost the ability to be open minded and consider they may agree with some policies from that 'evil' party, whatever that means to them.

All these policies are immaterial anyway, whoever is in power never delivers. As nice as 24 hour GP surgeries etc sound and millions of trees it wont happen and at least the other parties can at least pretend they are going to as they arent in power. If the conservatives were going to do any of this stuff they already would have since they have had ample time to do so.
2
reply

TheMcSame
Badges: 19
Rep:
? You'll earn badges for being active around the site. Rep gems come when your posts are rated by other community members.
#3
Report 2 years ago
#3
Hmmm. Not really any surprises here, I thought I would've leaned towards Labour when it came to Welfare though. 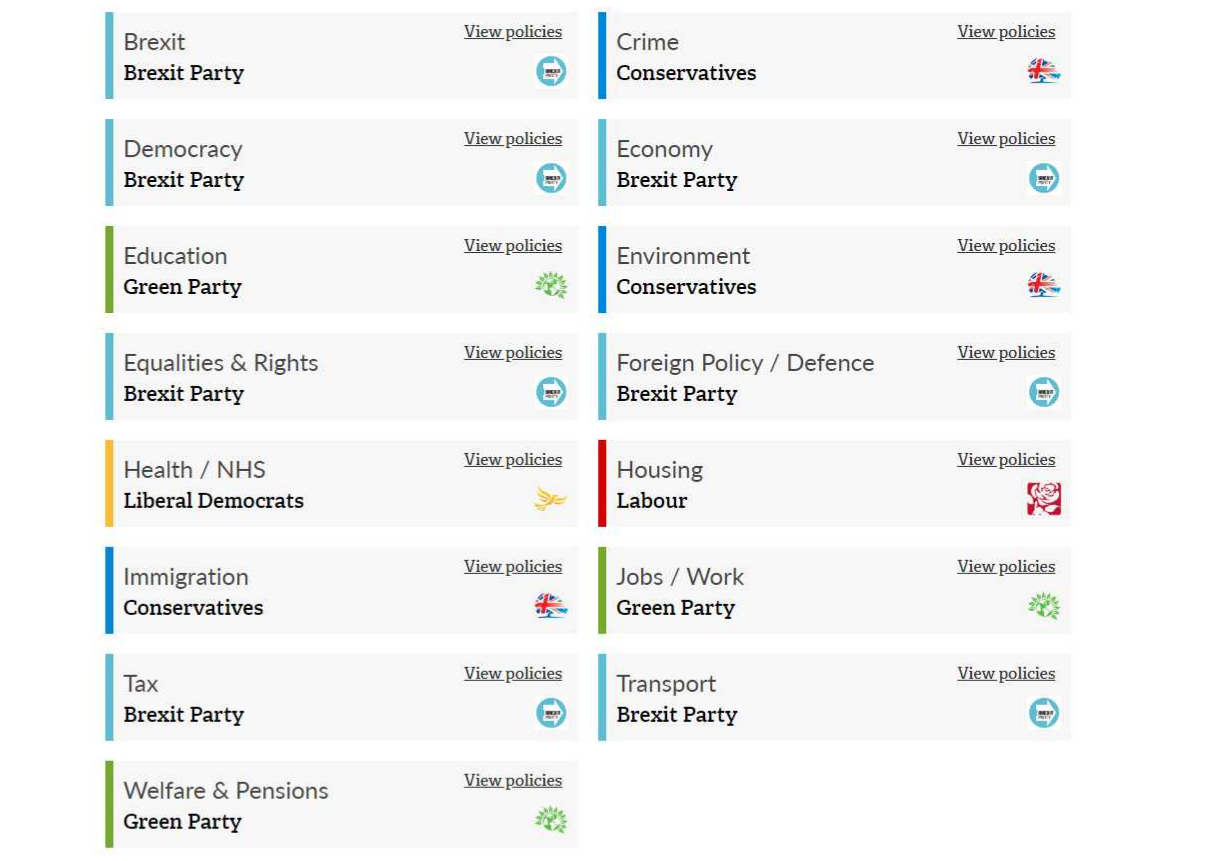 E- Seeing as the majority is Brexit, I guess I'll throw some explanations in while I'm here

Spoiler:
Show
Brexit - Seemingly the only party that wants to fulfil the original public vote and not potentially rejoin the EU later as a EFTA member.

Crime - It's not that I don't agree with the party, it's just too vague

Democracy - More representation is rarely a bad thing, the HoL should be elected as long as they have the power to have impacts on our laws... Etc...

Economy - Largely down to investment in fishing and coastal communities, the latter, especially as many costal communities rely on summer tourism to keep local businesses afloat. Could also aid in protection from the sea during bad weather as well. Also all for exempting small companies from corp tax which should, at least in theory, allow more start-ups to get off the ground.

Education - Again, it's less a case of disagreeing with them and more a cause of it just being a bit too vague.

Environment - It was, again, a bit too vague. However, the real turning point was nuclear energy. I believe that if we want to ditch fossil fuels, Nuclear is going to be the way forward and there has been talks of reactor designs that could potentially allow Nuclear power to last us billions of years. Whether those designs appear is another matter, but the short term solution to coal/oil/gas is nuclear imo.

Equalities/rights - Every other party seemed a bit too focused on women's issues. One (probably Labour) was proposing gender quotas in workplaces!

Foreign policy/defence - I see little issue to concern ourselves with foreign aid before we sort ourselves out. You need to help yourself before you can help others. Think of it like the oxygen masks on the plane. Obviously, NATO commitments are just sort of there. As for the EDU? Honestly, I don't understand what it is or why it exists. From a bit of light reading, it seems like some more peacekeeping cooperation lark interviening in other countries for the EU's sake. We're already in NATO, why do we need to be in the EDU?

Housing - I think I just agreed slightly more with what Labour were saying.

Tax - You shouldn't be taxed on inherited wealth. From my understanding, you have to pay the tax before you can claim the money (not sure if that has changed), I'd settle for the tax coming out of the funds (again, if it isn't already like that) but ideally, wealth that has already been taxed shouldn't be taxed again.

All for zero rate VAT on domestic fuels as it discourages the importation on foreign fuels and could potentially reduce emission as people/companies buy cheaper British fuels.

Fully agree with getting rid of the BBC Licence, especially in the age where we can watch all kinds of content online. Video killed the Radio Star, Internet killed the TV Star. If you can't afford the infrastructure on your own pocket then stop making the public suffer for your poor business decisions and stop harassing people who don't pay for this poxy licence because they don't need it.

Transport - HS2 has gone way over budget and will continue to go massively over budget. Stick with what we've got so far and scrap the rest. It's a money sink. I also can't imagine it being too popular considering how ridiculous rail fares are. It'd probably be cheaper to fly from Scotland to London.

All for local road and rail investments. Local roads are usually shambles. As for rail? Improve what we've got, then look at expanding in the future.

Welfare and pensions - The Greens just seemed so much more appealing to me (I swing right on social issues but left on economic issues for the most part). I definitely believe in a minimum supplementary pay to help support those struggling with jobs or having to cope with poor pay because of a lack of opportunities in the area (you'll find it hard to move out the area without the funds) or because of things like zero hour contracts which are so ungodly popular with employers.

However, I will add some adjustments I'd like to make. Anyone earning less than £15K would receive a boosted UBI payment (getting incrementally higher as earnings get lower). Anyone earning £30k or less would receive the flat regular UBI payment (weekly payments add a reasonable layer of security for those earning this much). Anyone below £40k would receive a reduced UBI payment (again, adds a layer of security that you just don't get with monthly pay). Anyone above £40k earns enough to comfortably provide for their family and shouldn't need a UBI payment (though could apply for a temporary UBI payment scheme for the month should they need to with a limit on how many times they can apply per year). Anyone over £60k should have no issues dealing with the costs of life and would have zero access to UBI payments until their circumstances change.

(Original post by CoolCavy)
Is utterly ridiculous, people have lost the ability to be open minded and consider they may agree with some policies from that 'evil' party, whatever that means to them.
It's because of what politics has become, it's less about the policies and more about the face fronting the policies these days. If you look at criticisms of parties during elections, you'll notice that the vast majority of it is personal criticisms aimed at the faces of the party and absolutely nothing to do with the policies. It isn't just the public that are guilty of this either.
Last edited by TheMcSame; 2 years ago
0
reply
X
start new discussion
Page 1 of 1

How did The Student Room help you with your university application?

view results vote now
Talking to current university students (8)
24.24%
Talking to peers going through the same thing (10)
30.3%
Speaking to student ambassadors from the universities (2)
6.06%
Speaking to staff members from universities (0)
0%
Using the personal statement builder, library or helper service (3)
9.09%
Reading articles about what steps to take (6)
18.18%
Learning about/speaking to Student Finance England (2)
6.06%
Something else (tell us in the thread) (2)
6.06%
total votes: 33