hellohi16
Badges: 5
Rep: ?
#1
Report Thread starter 1 year ago
#1
hi i have done a practice language paper one, i don’t know who to ask for advice because my teachers don’t help. maybe you could give this a rough score and tell me how to improve. also it’s a bit bad because it’s my first paper

2- Ivey creates an uncomfortable silenced atmosphere to describe alaska. this is evident when the writer describes the ‘broom bristles scratched like some sharp-toothed shrew nibbling at her heart’. the similar demonstrates that the silence is eating Mabel and isn’t ‘peaceful’ like she had imagined it to be. the harsh sibilance also helps imitate the sounds made from her broom. the verb ‘scratched’ creates an idea of painful sounds and also imitates a cat. perhaps, Ivey was trying to foreshadow something ominous as, superstitiously, cats are knows to have 9 lives, highlighting the fragility of human life. The use of personification, when saying that the broom ‘scratched’ could also hold some significance as it could possibly show that the broom as become personified and is showing her the terrible side of alaska. furthermore, the use of juxtaposition when describing when describing the ‘broom’ as ‘sharp-toothed’, something that creates a brutal and violent image in the readers mind, only ‘nibbles’ at her heart. the contradiction between the two ideas could implicitly imply how moving to alaska is slowly ‘nibbling’ at Mabel’s dreams and happiness. the noun ‘heart’ is also quite clinical but could also mirror feelings and how moving to Alaska was for a work reason, but she is her heart is not fulfilled. the uncomfortable sounds reinforce furthermore Mabel’s almost regret emotions towards moving to alaska.

3- Ivey interests the reader by adding a small flashback within the extract. In the first paragraph, we learn that Mabel has moved to Alaska and reflects gay she feels unhappy and shows signs of regret. then it shifts to a flashback to 10 years ago where ‘a tiny thing, [was] born still and silent’. the short sentence injects tension and passion into the extract. the sentence explicitly highlights that mabel’s baby was still borne. although others would argue that the short sentence shows the lack of significance, i believe that it is effected in representing how the pain and hurt still lingers in Mabel’s mind and shows how she is still not able to forget it. the use of caesura in the comma, and the short sentence, slows the pace down, initiating the pace of Mabel’s life, and how she hasn’t been able to move on from her baby. adding on to this, the comma could be used to symbolise the separation Mabel feels from her baby. however, it could also show her attempting to separate herself from the thought of it and move on. ‘born still and silent’ highlights that the baby is dead and reinforces the idea of emotional pain and attachment Mabel must have felt to the baby, triggering sympathy from within the reader. the sentence is also quite ambiguous and vague, as it doesn’t explicitly state that the baby is dead and also doesn’t explicitly show her emotions towards the baby. this could suggest that Mabel felt a sense of numbness, where she wasn’t extremely melancholy, but also not happy, she was emotionless and almost ‘still’ like her baby. on the the hand,
the ambiguity could suggest how Mabel is ignoring how she feels and trying to detach the memories from herself.

4 - i agree with this statement because Ivey, the writer is making the reader feel the emotions that Mabel is feeling, in the order that she feels them. this can be seen when Ivey describes the baby with ‘ears that came to narrow points...’ this description creates a detailed image of the baby in the readers mind, mirroring the one that Mabel has. this helps create a sense of attachment between the protagonist and reader. this also symbolises the love that Mabel still has for her baby as she is able to recall small features of the baby even 10 years later. it also adds to the running theme of a mother’s love for a baby, as Mabel is still emotionally affected by the thought of her baby. the noun ‘ears’ connotes hearing, sounds and one of the senses. this reinforces sympathy in the reader as we know that the baby is dead, so it cannot bear any sounds. it also reminds us of the innocence and purity of the baby and helps the reader understand what Mabel’s emotions.
later on in the extract, the writer shifts in focus, from mabel’s thoughts, to the her surroundings and the environment around her. it moves on the idea of weather and how it affects mabel’s emotions. it talks about the month ‘november’ which connotes death and reincarnation and helps the reader understand why Mabel had the flashback of her baby. Ivey describes the cold november brings as ‘cold upon the valley like a coming death’. this phrase introduces a new theme, just like a new thought in Mabel. the noun ‘valley’ implies that the cold is inescapable and that Mabel is surrounded by the cold and there is no way out of it. the use of double entendre could mean that Mabel cannot escape the cold that november brings but also links back to her flashback and how she cannot escape the pain she still feels from her baby. the similar ‘like a coming death’ could be foreshadowing something ominous coming up, while in the cold winter months. it also can imply that death is all of a sudden and can’t be planned for, it is unexpected, injecting fear and terror in the reader. this phrase is also biblical language and can be mirroring the phrase ‘valley of death’ from psalm 23. in psalm 23, it is said that god is always there for people and refers to ideas such as the light at the end of the tunnel. this shows Mabel’s desperation for a solution for her baby. it also has a theme of hope and this links in with ‘november’ and how it is a month of death, as well as reflection and change, mirroring how Mabel’s emotions have changed from melancholy to hope and freedom for her baby.
0
reply 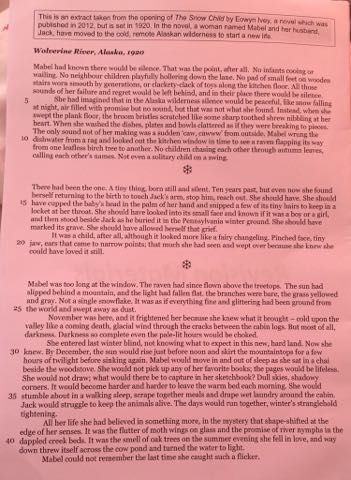 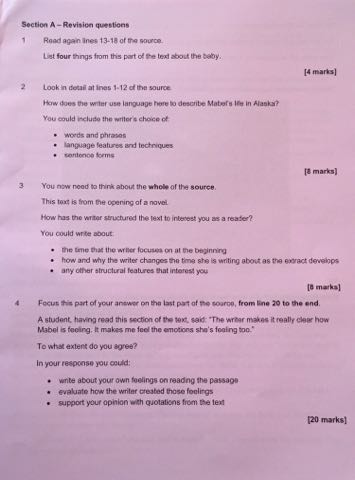 No problems with Q1. Q2, you need to explore a range of points; you labour the same point and it gets a bit forced. Q3 is similar; you need more depth and range. Q4 is okay. Clearer paragraphs and better punctuation would make it easier to assess. It's not a double entendre. Some evaluation takes place but the points aren't always credible. I might be being a bit harsh here; you might scrape into the level above. Somewhere between 8-11 anyway.
1
reply

hellohi16
Badges: 5
Rep: ?
#4
Report Thread starter 1 year ago
#4
okay thank you, how could i improve? what kinds of things would help? xx
0
reply

No problems with Q1. Q2, you need to explore a range of points; you labour the same point and it gets a bit forced. Q3 is similar; you need more depth and range. Q4 is okay. Clearer paragraphs and better punctuation would make it easier to assess. It's not a double entendre. Some evaluation takes place but the points aren't always credible. I might be being a bit harsh here; you might scrape into the level above. Somewhere between 8-11 anyway.
I love seeing your expert opinion. I aspire to help people like this.
2
reply
X
start new discussion
Page 1 of 1

Have you experienced financial difficulties as a student due to Covid-19?