Hi! Call me Shad! It's not my real name but people call me that so we'll go with it.
Tune in for:
How I'm revising, what I need to work on and how I'm handling my workload
Pictures of how I'm organising myself for those stationaryholics out there!
Mental health, how I'm feeling at particular points in time
And most of all an abundance of Peaky Blinders GIFs!
+ A Q&A Thursday as of December the 26th!

By the end of this blog I hope to have achieved spectacular results for every subject listed but Art, and for myself, as well as you lot to be walking into exams like this:

Having just started my two-week Christmas holiday following Mocks, it's been relieving to be able to actually relax and unwind for a few days. My exams went well considering the sacrifices put in; which essentially consisted of just binging content on youtube the night(s) before...
The subjects I've taken are as follows:
Art
English Language (Edexcel)
English Literature (Edexcel)
French (Edexcel)
Physics (AQA triple)
Biology (AQA triple)
Chemistry (AQA triple)
History (Edexcel)
Computing (OCR)
Religious Studies (Edexcel)
Maths (Edexcel)
and potentially AQA Level 2 Further Maths, I'll look through the content and if advice deems so I'll decide then.
In terms of Mock results I'm hoping for 8s and 9s mostly. I believe I'll receive them on returning to school, first week back AT PARENTS EVENING.
Basically I don't want to repeat the late-night gruelling procrastination I had to do for Mocks. It took a physical and mental toll. I could do with revision tips for a variety of subjects above, particularly English, the humanities and Computing. And French...I don't struggle particularly with it but in terms of vocabulary I've barely touched the specification or any lists as such...
This isn't a road to ALL 9s by the way. Art is a very weak subject of mine and as the title suggests motivation is my bane.
Please share any advice and ask around!

Spoiler:
Show
Year 11 seems to be fine so far. It'd be a lie to say that everybody's stopped messing about in class but I'm sure it'll hit us eventually?... In terms of mental health I tend to be a relatively happy guy. Stress doesn't hit hard until the day before an exam though, which is potentially really bad? In terms of extracurricular activities, I'm quite sporty but it means often I can't stick to plans. I'm British-Bangladeshi *Big up* and a proud Muslim. I'm the eldest of three with a younger brother and sister. They're great. Grammar schools are overrated I'll say that from personal experience... At the moment I'm playing badminton for my county and wouldn't mind pushing for national trials and stuff after GCSEs, but training more than 3 times a week would completely tire me out. Me and my friends have stopped going out for films and stuff as much and most of them have gone on holiday. Often I find myself saying 'Today's the day you start eating up those textbooks and never again touch your phone.' before completely zoning out and getting back to whatever useless stuff I usually do. I like books equally as much as I like Netflix. That's it to be honest. Oh and I want to study Biology, Chemistry, Maths and Psychology at A Level to eventually do Medicine at Imperial

So I should be going out in a few hours and having watched Netflix for hours on end I should get studying.
In the two hours I have, I shall make flashcards for all of Chemistry's Required Practicals!

So I should be going out in a few hours and having watched Netflix for hours on end I should get studying.
In the two hours I have, I shall make flashcards for all of Chemistry's Required Practicals!

Literally just by coming back to this post when I'm demotivated forces me to keep going...Can't afford to fail in the public eye for some reason.
0
reply

) In terms of resources, I'd be happy to go out and buy whatever necessary such as for History (edexcel) and particularly AQA Further Maths if anybody has some advice. Of course the better alternative would be YouTube channels etc. History is a bit of a sticky one still, seeing as the textbooks are very content heavy. For mocks I essentially just read over Cold War and Elizabethan England the night before and I don't want to do that again...

I was far too tired last night to finish off those Required Practicals Flashcards for Chemistry, so I'll do that now.

After that I'll get started with Physics and Biology!
Hopefully after a break I can start my Chemistry freesciencelessons binge.

TakeALittleWalk
Badges: 12
Rep: ?
#7
Report Thread starter 1 month ago
#7
I feel like I can't be asked to eat lunch today, so during my break I'll most probably end up doing something beneficial for the community as well as myself.
I've though of doing it before, and the idea of a poster just stuck right in front of me fuelled with motivation- does not sound like a bad idea!
Pictures coming soon!
Last edited by TakeALittleWalk; 1 month ago
0
reply

TakeALittleWalk
Badges: 12
Rep: ?
#8
Report Thread starter 1 month ago
#8
Quick update, I took an early break to make a motivation poster which I'll post a picture of later, then had some pasta (Not delicious but it'll do) I'm on Required Practical 7: Identifying Ions for Chemistry (Yes I'm slacking) and it seems to be quite difficult to take in. Hopefully the freesciencelessons binge later on will help me out.
0
reply

Study2212
Badges: 12
Rep: ?
#11
Report 1 month ago
#11
(Original post by TakeALittleWalk)
I'll take a break and clear up my table. It's be coming for a while now...
Your blog is really motivating me if you ever feel like giving it up remember you have a reader

TakeALittleWalk
Badges: 12
Rep: ?
#12
Report Thread starter 1 month ago
#12
(Original post by Study2212)
Your blog is really motivating me if you ever feel like giving it up remember you have a reader

Aha that's more than motivating, thanks a lot!
0
reply 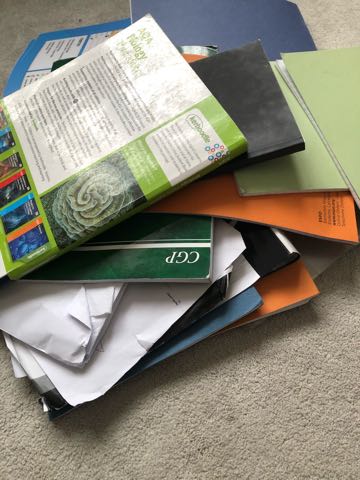 Multiply that by ten and that’s the rest of the stuff I am yet to clear out off my table.
0
reply

TakeALittleWalk
Badges: 12
Rep: ?
#14
Report Thread starter 1 month ago
#14
I love how no matter how many textbooks you have, you're no better at the subject unless you go through them...
2
reply

TakeALittleWalk
Badges: 12
Rep: ?
#15
Report Thread starter 1 month ago
#15
SO my table's looking great and I'll send pictures in a bit. Need to finish the His Dark Materials season finale though. A half an hour break for potentially the last TV show I watch this holiday! 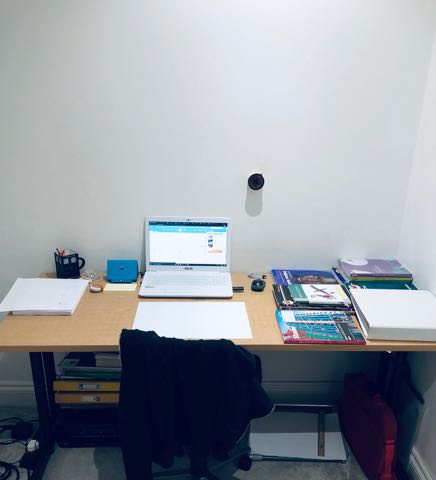 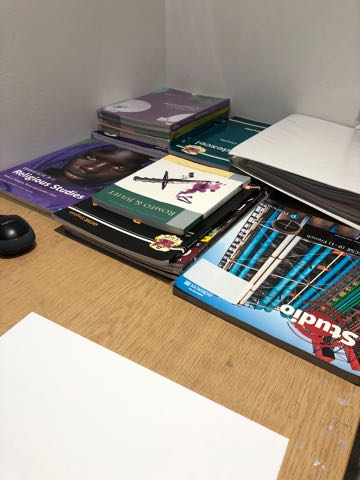 TakeALittleWalk
Badges: 12
Rep: ?
#19
Report Thread starter 1 month ago
#19
Sellotape isn’t the best of things to leave lying around you table: take note.
As for tasks, it seems all the time I have left will be used on required practicals for the remaining two sciences after prayer. I’ll start freesciencelessons chemistry and see how much I can get done!
0
reply

Christmas wishes from my neighbours! At least now I know what I’ll be doing while taking breaks...
0
reply
X
start new discussion
1
2 3 4 5