Taiwan, officially the Republic of China, has freshly concluded its 2020 presidential and legislative elections, with the ruling pro-independence party winning both the presidency and the legislature (with a reduced majority).

The incumbent, Professor Tsai Ing-wen, whose name means "English" and who obtained her doctorate from the LSE, was re-elected with more than 8.1 million votes - a historic high - despite appalling polling numbers in the beginning of 2019 seeing her almost losing her own party's nomination back then. Her support went as low as 25%, trailing behind the pro-China candidate throughout until the second season of 2019, and shot up from July 2019, partly due to the alarming Hong Kong protests reminding Taiwanese citizens of the need to reject Chinese encroachment.

The President is one of the most powerful women in Asia currently, alongside the Oxford-educated State Councillor of Myanmar, Daw Aung San Suu Kyi. She was the first female head of state elected in the Chinese-speaking world - Hong Kong's Carrie Lam was "elected" by an electoral college largely controlled by Beijing, Singapore's Halimah Yacob became president in a walkover due to her election being one "reserved" for ethnic minorities, and China's Madame Soong Ching-ling was only acting president and merely appointed by the undemocratic congress.

Most countries in the world officially recognize Taiwan as a province of the People's Republic of China founded in 1949, who has never exercised any form of control over the independent sovereign country. The rest of those countries, as does Taiwan itself, officially recognize Taiwan as the free and unoccupied area of the greater Republic of China founded in 1911, whose claimed territories including all of modern-day China, Hong Kong, Macau, half of Mongolia, as well as lands currently controlled by numerous other nations such as India. Taiwan consists of the island of Taiwan on top of several islands off the Chinese coast, as the Chinese nationalist dictatorship lost the Civil War post-WWII and retreated to the island. Officially, Nanking has remained its capital even though Taipei is its de facto capital. The Chinese nationalists also invaded and held parts of Myanmar, before withdrawing to Taiwan. Those areas are now known as Wa State, and are supported by the current Chinese regime. 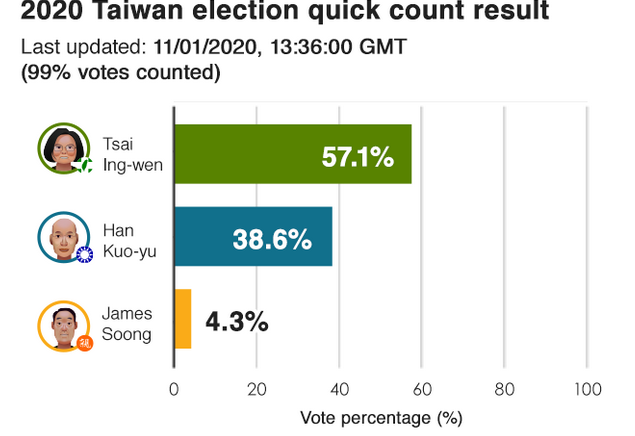 Landslide for her. Seems she was losing until recently when Hong Kong treatment by China became an issue and the Taiwanese want thewir democratic independence plus have no interest in being bullied.
0
reply

Landslide for her. Seems she was losing until recently when Hong Kong treatment by China became an issue and the Taiwanese want thewir democratic independence plus have no interest in being bullied.
Going from 25% to 57.1% was indeed an incredibly surge in less than a year, and like I mentioned in my OP, the Hong Kong situation did contribute to it - we have to remember that the murder that the Hong Kong regime used to justify the extradition bill happened in Taiwan. But it's difficult to tell how big of a factor it was, but it'd be really oversimplification if we are to say that was the reason for her to be re-elected. Ultimately, she ran a marvellous campaign.
Last edited by El Salvador; 9 months ago
0
reply

El Salvador
Badges: 21
Rep: ?
#5
Report Thread starter 9 months ago
#5
(Original post by Napp)
Wasn't that move, by most accounts, grossly unpopular within Taiwan?
That's a gross misinterpretation of the events. If that was the case, President Tsai, who was herself one of the most vocal supporters of same-sex marriage, would not have been re-elected with this number of votes.

First of all, like it is the case in practically everywhere, same-sex marriage isn't something that concerns most people, and people don't really care about it one way or another whatever happens. In the UK, an example would be those politicians who say they personally disagree with it but will not do anything about it because it's already happened.

Secondly, everyone knew that it had to be done because the court ruled that it was constitutional. The option of amending the constitution was never even mentioned anywhere across the political spectrum. Hence, the debate and the subsequent referenda were never about same-sex marriage as we understand it.

The Christians shaped the debate by making a distinction between same-sex marriage within the heterosexual marriage framework, and same-sex marriage as a standalone law. For whatever reasons, voters did buy that and voted against legalizing same-sex marriage by modifying the heterosexual marriage law. They did not vote against legalizing same-sex marriage itself, and in fact voted in favour of granting the same rights and privileges to gay couples. In effect, it was like voting against gay marriage but voting for gay civil unions, except in this case, they are both called "marriage". What the votes did, apart from symbolically making gay marriage a standalone law, was to limit its eligibility - Republic of China citizens (not the same as nationals) can only gay marry other Republic of China citizens.
0
reply
X
start new discussion
Page 1 of 1