Can't stand it! Harvard and MIT are suing the U.S. government

knowlnrws6481
Badges: 3
Rep: ?
#1
Report Thread starter 3 weeks ago
#1
U.S. Immigration and Customs Enforcement announced on July 6 that international students will not be able to obtain or maintain a visa for the fall semester 2020 if they only take online classes. The new rules require that international students studying in academic or vocational courses in the US will not be issued visas and will not be allowed to enter the us if their school only offers online classes this autumn. Students who are currently in the United States and will be in this situation during the fall semester will also have to leave the Country or transfer to a face-to-face school or face deportation proceedings.
As soon as the new regulation was issued, it caused a great stir in domestic public opinion. American public opinion pointed out that this new regulation is part of Trump's policy of forcing schools to reopen, trying to kick foreign students out of the United States and to open campuses as soon as possible by putting pressure on students.
American colleges and universities, which bear the brunt, responded warmly. On the 8th, Harvard and MIT filed a lawsuit against the trump administration. The petition said the new rules violate the U.S. Federal Administrative Procedure Act and were issued without any justifiable reason, without public comment and without due consideration.
Harvard president Lawrence Bacow said in an open letter that the new visa rules for international students were issued without prior notice, "cruel and reckless.". He believes the move is intended to pressure universities to restart their campuses, regardless of the health and safety of students and staff. 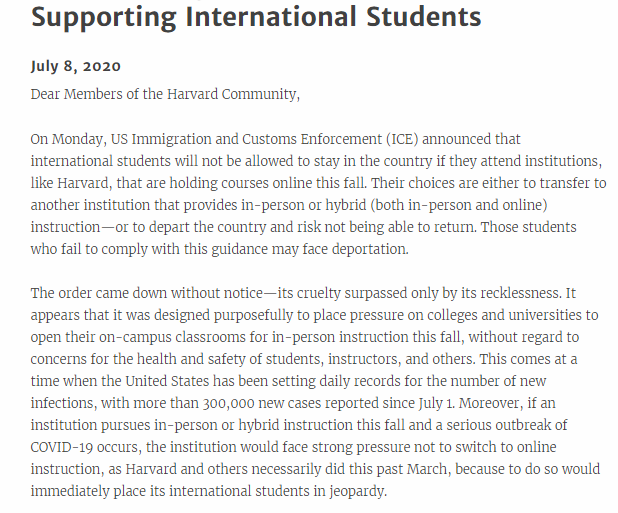 Recently, trump has been calling for the reopening of the campus to match his economic restart plan. If U.S. colleges and universities do not open in the autumn of 2020, trump will cut off government funding for colleges and universities, CNN reported.
A growing number of colleges and universities have called for a halt to the new visa policy. In addition to Harvard and MIT, the University of California has said it plans to follow suit. At present, the list of universities supporting the lawsuit continues to grow.
The number of confirmed coVID-19 cases in the US continues to rise alarmingly every day, while the Trump administration continues to find ways to revive the economy and win re-election at the expense of people's interests and health.
The immigration and Customs Enforcement agency (ICE) on July 12 made some changes to its new policy for international students for it caused public anger before.
Under the new policy, all international students in the United States will not be able to take online classes, while those outside the United States will be able to take online classes locally. Students who do not return to the United States but still take online classes remain students.
Although the New policy has been revamped, the anger has not abated.

Foreign students are also victims of the epidemic. Instead of helping them, the US government exerts pressure and threats on them, making students in the US constantly afraid of being repatriated and unable to continue their studies. From the perspective of educational fairness, the US government does not seem to regard the educational right of students in the US as one thing, but only sees economic benefits. From the perspective of economic interests, such new rules further weaken the attractiveness of the United States to outstanding talents, bring incalculable losses to the national economic development, and do no good to the international image of the United States.
Last edited by knowlnrws6481; 3 weeks ago
2
reply