saaraa1080
Badges: 10
Rep:
? You'll earn badges for being active around the site. Rep gems come when your posts are rated by other community members.
#1
Report Thread starter 1 year ago
#1 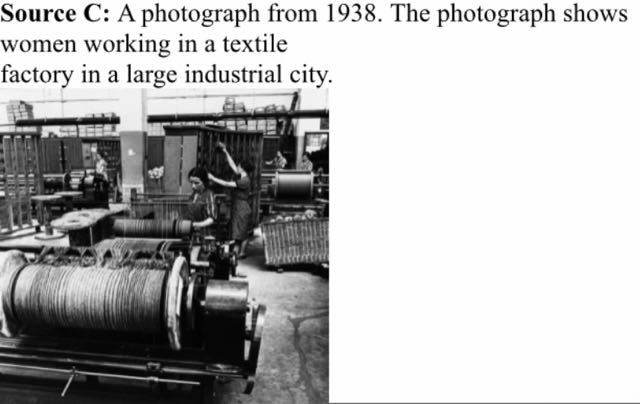 hamid246810
Badges: 10
Rep:
? You'll earn badges for being active around the site. Rep gems come when your posts are rated by other community members.
#2
Report 1 year ago
#2
IDK what I'm doing here I literally did history GCSE 2 years ago. but I got a 9 so I guess I would approach it like this:

critique the date - 1938 : does this have any significance? were the nazis in full control yet?
type of source - photograph : on one hand doesn't tell the full story, on the other hand it is visual so it can't be made up

these are some things the source presents:

type of work - textiles: women working with clothes is very sort of "stereotypical" so maybe they thought that's the only work they had the skills for.
the women are also working with only other women so this could show how they kept both sexes separate at work.
the clothes the women are wearing are very modest and its a uniform i think so this could show how modesty was very important to them.
there's not many women there- maybe this shows women were expected to stay at home/discouraged to go out
the women look young - maybe unmarried

that's all i have ahahaha. these questions are more about being able to spotting things, planning ur answer and quickly getting it down, and i remember them being my favorite back then.

as09657
Badges: 1
Rep:
? You'll earn badges for being active around the site. Rep gems come when your posts are rated by other community members.
#3
Report 1 year ago
#3
I do alevel History and am studying this, perhaps this'll help?

think first: what were the original nazi policies toward women? (Kinder, Kuche, Kirche)

what was happening in 1938? Germany was preparing for war (4 year plan for economic autarky)

Given that women at work goes against Nazi policy, what is the significance of this photo?
0
reply

douganj
Badges: 1
Rep:
? You'll earn badges for being active around the site. Rep gems come when your posts are rated by other community members.
#4
Report 3 months ago
#4
For an edexcel gcse paper 3 answer I would say:
Source C is useful to help us understand that the Nazi policies towards women were not followed throughout the period. I know that the Nazis wanted women to be out of the workplace and at home, but source C shows us that in 1938 there were women in the workplace. From my knowledge I know that in the later 1930’s there was a change in the Nazi policies towards women in work because there was a shortage of labour, as Germany was gearing up for World War Two. This meant women were brought into the workplace, to work in factories, many of them worked in the armaments factories. Source S shows that Nazi policies had changed, with women doing manual work in industry, instead of being in the home and from my knowledge I know that by 1939 there were 50% more women working factories that there had been in 1933.

In terms of its provenance, source C is useful to show us the changing role of women in Nazi Germany and it gives us a view from the time, of a woman doing manual work in Germany, which helps us understand how Nazi attitudes to working women had clearly changed. The photograph looks genuine because if it was staged for propaganda, perhaps there would have been a smiling woman at the front and one more obviously “Aryan” looking. However, this is a photograph taken in one industrial city so it might not reflect the situation in other areas of Germany and especially not in the more rural areas, which were more traditional.
0
reply
X
start new discussion
Page 1 of 1

57 study, learning and revision habits of A* students
Latest
Trending