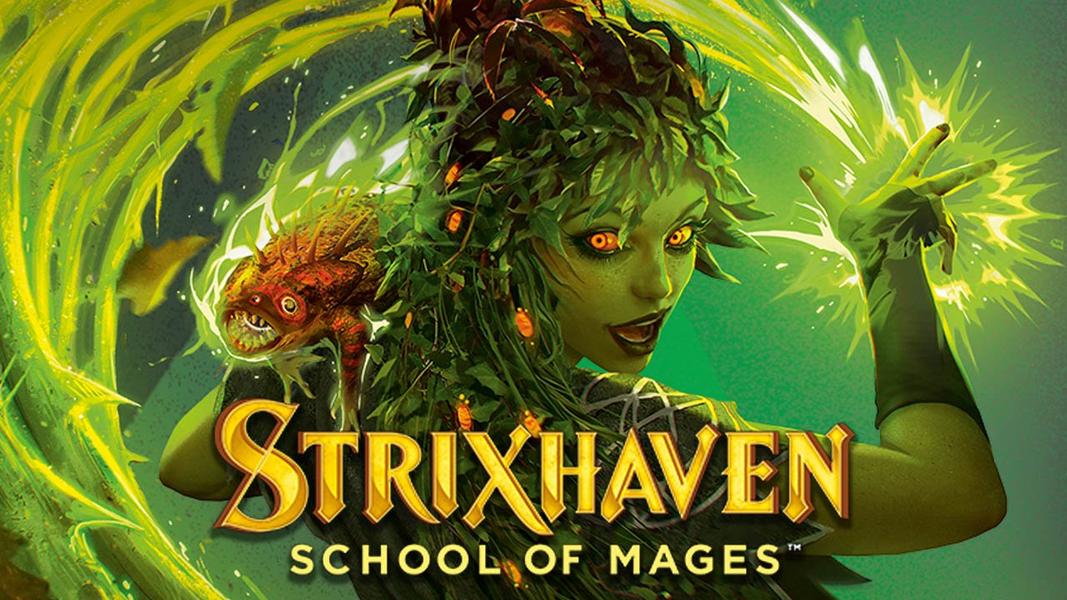 Magic: The Gathering's 87th expansion, Strixhaven: School of Mages, is due for release on April 23rd, 2021 (Paper pre-release starts April 16th; on MTG Arena and Magic Online from April 15th).

Spoiler season officially starts this Thursday, but Wizards of the Coast have already previewed a small number of cards, as well as giving a quick rundown of Strixhaven University itself, and the five wildly different colleges that make it up:

Have to say, I am loving the look of Witherbloom, Lorehold and Prismari especially! There was a fear back when the 'School of Mages' name was first dropped that the set would end up being a blatant Harry Potter knock-off, but these colleges don't bear much of a resemblance to Harry Potter's houses.

On top of the Strixhaven cards themselves, each pack comes with a card from a subset known as the 'Mystical Archive' - all Instant or Sorcery cards from MTG's long history, reprinted with fancy new art! And unlike other similar things like the Kaladesh Masterpieces, they'll also be added to MTG Arena, and will (mostly, with a few exceptions due to power level) be legal in the Historic format!


Before previews for Strixhaven officially begin, I thought it would be fun to do another of my Duelist-style teasers where I give tiny hints of things to come. Note that I’m only giving you partial information.

First up, here are some things you can expect:

• a white card with the rules text “draw three cards”

• a planeswalker you know, but not as you know them

• a spell with three X’s in its mana cost

• introduction of a new evergreen keyword

• a card sharing something never shared before


Here are some snippets from rules text that appear in the set:

• “Otherwise, put a study counter on it.”

• “untap each creature you control, then tap any number of creatures you control”

• “Each mode must target a different player.”

• “where X is the number of cards in your library”


And finally, here are some creature type lines from the set:

Find out the answers to (some) of these clues and other Strixhaven news on March 25th at 9:00 AM PT. Tune in either on twitch.tv/Magic or on our official YouTube channel.
Last edited by AngryJellyfish; 3 weeks ago
0
reply

First up is Kasmina, Enigma Sage. We first met the character back in War of the Spark, and while I'm not sure if it was ever confirmed she was from Strixhaven's plane of Arcavios, it was easy to guess since she's a wizard mentor who made reference to having students. Her card back then was just blue, while Enigma Sage is blue and green, suggesting she's a Quandrix maths teacher. Her mana cost (new terminology for CMC, used from Strixhaven onward!) is low at 3, but so is her starting loyalty at only 2. Her first two activated abilities are pretty meh, while but her ultimate (-8, fetch an instant or sorcery that shares a colour with her, then cast it for free) is nice if you can get to it. Otherwise, her static ability can 'teach' other Planeswalkers with higher loyalty to do the same things she can.

Second is Professor Onyx... to quote Maro's teaser, 'a planeswalker you know, but not as you know them'. Much higher mana cost at 4BB. Has a static ability which features a new keyword, 'Magecraft', which seems to activate whenever you cast or copy an instant or sorcery. In Onyx's case, it makes you gain 2 life and each opponent lose 2. Her +1 lets you look at the top 3 cards of your library, keep one then put the other two in your graveyard, at the additional cost of losing 1 life. -3 makes each opponent sacrifice the creature they control with the greatest power. Her ultimate is -8, opponent may discard a card or lose 3 life... then repeat that 6 times. Brutal!
0
reply


A few cards were previewed in the video, but since there are so many different things tied to Strixhaven, Scryfall has helpfully split them into three different lists:

Strixhaven Mystical Archive (bonus cards included in boosters, all reprints, legal in limited + whatever formats they're already legal in)

Of these, the seven arguably most busted (Channel, Counterspell, Dark Ritual, Demonic Tutor, Lightning Bolt, Natural Order & Swords to Plowshares) won't be legal in Arena's Historic format. *Apparently* only four are banned in Historic Brawl, but since that's not an officially supported format, I'm struggling to find a reliable list. And of course, all are legal in friendly matches, sealed formats, and against the practice bot Sparky.

I imagine the likes of Doom Blade, Time Warp, Lightning Helix, Grapeshot and Faithless Looting will quickly find homes in many decks!

Plenty there of interest; nothing game-breaking at first glance, hopefully WotC have learned from the past year. The Elder Dragons should certainly be limited bombs, if nothing else. And then there's Harness Infinity, 1BBBGGG to exchange your hand with your graveyard - definitely the most unique card in the set, it'll be fun to see what uses people come up with for it.
0
reply

Legendary creatures aside, it seems like a lot of the early interest is in Archaeomancer's Map (decent ramp in mono White), Monologue Tax (worse version of Smothering Tithe, but again White will take whatever WotC gives it!), and Guardian Augmenter (buffs your commander(s) by +2/+2, and gives them hexproof, with Flash).
0
reply

AngryJellyfish
Badges: 18
Rep: ?
#9
Report Thread starter 6 days ago
#9
Early access streamer events are apparently discontinued from this set onward... A real shame, they were always fun, and great for building hype. Especially sucks for any streamers / Youtubers who took time off for this. Seems like the beginning of another PR nightmare for WotC.
Last edited by AngryJellyfish; 1 hour ago
0
reply

A real shame, they were always fun, and great for building hype. Especially sucks for any streamers / Youtubers who took time off for this. Seems like the beginning of another PR nightmare for WotC.
An interesting video on this subject from CGB:

Spoiler:
Show
methinks you should try and attend as it doesn't look like there is much of a fan base gathering for this on tsr .. pun intended

AngryJellyfish
Badges: 18
Rep: ?
#12
Report Thread starter 4 days ago
#12
(Original post by ANM775)
randomly just came across this and then remembered this topic

Spoiler:
Show
methinks you should try and attend as it doesn't look like there is much of a fan base gathering for this on tsr .. pun intended