mai-san
Badges: 12
Rep: ?
#1
Report Thread starter 2 months ago
#1
Can someone give me feedback on my answer ? 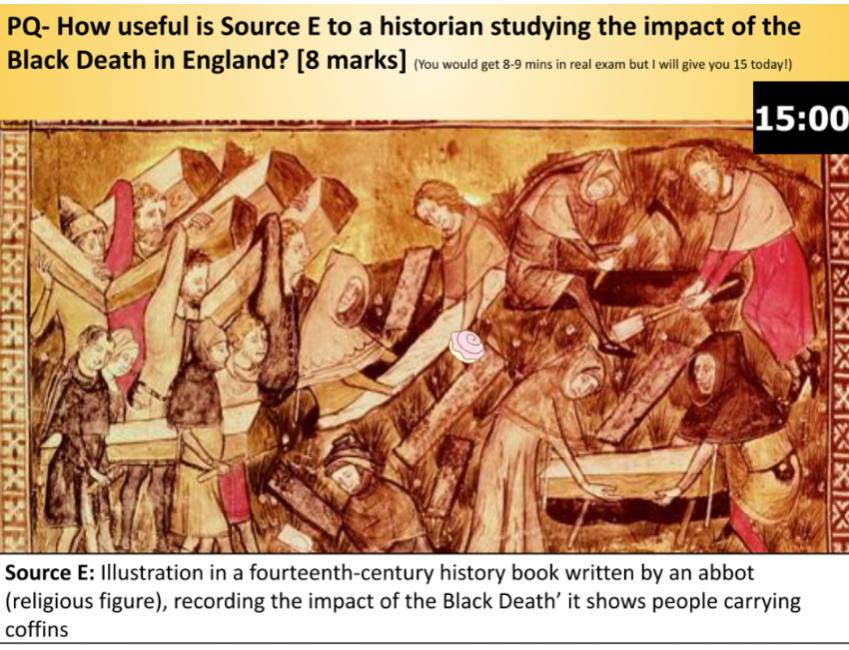 How useful is source E to a historian studying the impact of the Black Death?
In source E we can see that there are a group of men and women carrying coffins, the number of coffins is near twice the amount of people that are burying them, through this we can infer that there are not enough places to burry everyone. In reality, 30-50% of the population had in fact died. They were unable to cope with the number of people that died, people were dying at a quicker than they were able to bury them. As a result of the rushed burials, the graves were often not deep enough causing hazards for those burying the dead. From this source, we can learn about the rate of people dying and how they were buried we can also see how society was completely overwhelmed by the death of all these people and how they had no real understanding of what was causing them to die or how they could possibly prevent it. We can also see how all people began to work together because of how bad the situation was getting and how much they needed to rely on each other. The Black Death played a key role in the renaissance as many started to challenge what they were being told and why they were in this position. Thus, this source is useful because it shows the reality of how devastating the Black Death was and how society was completely overtaken by this event.

Source E was made in the 14th century by an abbot. It is an illustration for a history book portraying the impact of the Black Death. Through the source being created by and abbot, it shows that even the monks and nuns were affected and that they played a big role in the recovery period after the Black death. The Black Death lasted from 1348-1350. After the Black Death, the church began to lose its popularity as monks and nuns were held in suspicion because people thought they played a part in the cause of the Black Death. Therefore a historian can learn about a monk’s perspective on the Black death, they also suffered, that it wasn’t their fault and they lost may people too. This source humanises the monks and makes them seem more relatable. Source E is a contemporary source, this emphasis the sense of trauma and tragic experience of the Black Death.
Attached files
Last edited by mai-san; 2 months ago
0
reply

i think 7/8 normally these are 8 markers . always remember to include your own contextual knowledge.
1
reply

what board are you doing? im guessing youre year 11?
0
reply

what board are you doing? im guessing youre year 11?
I'm in year 10 actually , my exam boards is EDXL