also, i do believe that india are more deserving of 2nd place than eng as 2nd place by definition to me means the team that can challenge the aussies the most and if any side has done that in tests it has been india. we were the last side to beat them in a test series and recently drew in australia.
before the pakistan series pak were rated 3rd in the world, so we beat a side rated 3rd in the world

west indies were rated 8th so england beat the 8th best side, and yet they go higher

ludicrous, considering englands shambolic record against the aussies. and also considering that head to head we have had the upper hand over england, beat them in india and drew in england, we have 1 series victory, they have none.(same in odi cricket too!)

england deserve to be 2nd , follow circket matches mate . They could rite now beat australia i think ... jus look at their batting

england havent lost the last3 out of 4 test series they have played ...

as far as i can remember , Eng in WI , NZ in Eng , Eng in Bangladesh

and dont say tht the series againts bengalis dont count , they are a test team and even to win against a wek team u have to put in effort ...

jar
Badges: 0
#2366
Report 16 years ago
#2366
Ok, everybodys' predictions for the upcoming season go on this thread
Categories are:

Joey_Johns
Badges: 10
Rep: ?
#2367
Report 16 years ago
#2367
(Original post by saintuntilidie)
No chance lad. Why would Scully want to join Wigan? Not all players go where the money is. Surely he would want success rather than a bit of extra wedge in his pocket.

People are getting too carried away with the recent lack of form of saints. Ok, we take a couple of hammerings and suddenly the club is in crisis. The club has been in financial problems for as long as i can remember and they havent had too many problems in recent years at winning trophies.

With regards to the low attendances at Knowsley Road, this has been the case all season, not since the suspensions of long and gleeson. You have to look at the wider picture. Of Saints 25 league and cup games this season, they have been on TV 17 times (approximately). Now given the choice, some supporters who wouldnt be considered to be die-hard fans dont turn up taking into account factors such as poor weather, not a "big game" (ie, wigan, leeds, bradford). if the game is on TV, many will stay at home, thus reducing attendances.

Also, people have to remember that Leeds and Bradford, are cities, therefore have larger populations, whom can attend games. I know Wigan is also a town, but not as many of their games are on TV.

NEVER WRITE THE SAINTS OFF! we'll be there come the end of the season. Have no doubts about that. Quality speaks for itself.
Obviously a passionate supporter. Look at the league table. Teams nearer the top usually win the GF. The problem with Saints is that two injuries can make them a mediocre side. No back up. Wigan are on TV just as much as any of the other top 6 sides, you are obviously missing a brain cell there.
0

Buffon
J. Zanetti (saw him play once and he was a cut above)
Campball
Nesta
Zambrotta
Nedved
Ballack
Zidane
Ronaldinho
Henry
Van Nistelrooy


now who could argue with that
0 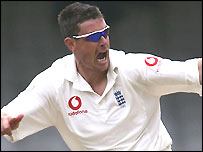 Giles ended a fourth-wicket stand of 70 when he bowled Brian Lara for 44, gaining his 100th Test wicket.

And Geraint Jones completed two stumpings as the tourists were bowled out for 267 before tea on day five.

Shivnarine Chanderpaul was the only man to stand firm, an unbeaten 97 taking his match aggregate to 225.

Giles' 5-81 marked his first five-wicket innings haul in a winning cause and career-best match figures of 9-210, gaining him the man-of-the-match award.

Not since Derek Underwood took 13-71 against Pakistan in 1974 has a spinner taken better match figures in a Lord's Test.

The victory was England's seventh in their last eight Tests, with their last defeat against Sri Lanka in December.

They could already be pretty certain of celebrating after declaring with their second innings total 325-5 on Sunday.

Beginning the day 114-3, Lara and Chanderpaul carried the best hopes of batting out the day.

While Lara was in there even remained a faint hope of reaching the record 478 needed for victory and the duo frustrated England for an hour and a quarter.

Bowling for all but one over of the morning, over the wicket and into the rough outside the off-stump for the left-hander, Giles caused Chanderpaul more trouble.

But Lara provided the milestone wicket, bowled around his legs with a ball that beat him with flight and turned sharply.

Dwayne Bravo provided the left-armer with a tame return catch and Ridley Jacobs was caught at slip off Hoggard in the very next over.

Harmison put a desperate Banks out of his misery by uprooting his stumps.

Then Tino Best had a rush of blood to the head after he was on the receiving end of some chatter from the fielders, and was promptly stumped looking to heave. 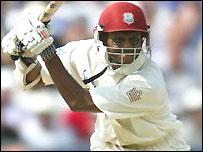 And Giles ended a frustrating ninth-wicket stand of 44 when Pedro Collins fell for two, looking to slog-sweep the 38th delivery he had received.

Chanderpaul, who was not given out caught off his glove on nought, survived some terrible blows, on the elbow early from Harmison and the knee from Jones.

In all he faced 270 deliveries, with 15 fours, including three in successive balls from Hoggard late in the piece.

But for the final three hours it never looked like being enough.

Only once, in 1973/74, have two batsmen hit two centuries each in the same match, when Australians Ian and Greg Chappell achieved the feat against New Zealand, and it was not to be here.

West Indies have not defeated their former whipping boys since the first Test of their last visit in 2000.
0

Ah well...I am enjoying life at the far end of the M62 whilst my team sits (for the time being) 2nd in the league ladder.

We play Wully Bullies twice and Wigan once in the run in. If we can win two out of these I think that 2nd is a real possibility.

Joey is your girlfriends Grandad DW?
0

yes that is wot the portugeese (twice), french, czechs all said...
0

Ah well...I am enjoying life at the far end of the M62 whilst my team sits (for the time being) 2nd in the league ladder.

We play Wully Bullies twice and Wigan once in the run in. If we can win two out of these I think that 2nd is a real possibility.

Joey is your girlfriends Grandad DW?
Uuh well, his initials happen to be DW yes

we outbatted australia in their ownbackyard, scored 705 against them at sydney, you guys could never do it

you have to rely on playng the west indies twice in a matter of months to push your icc rankings points up, also you played an injury depleted kiwi side.

you wait until u play the best 3 batting lineups in world cricket, eng south africa and india, you wont stand a chance.

and by the way, dont tell me to watch cricket cos i bet you anything ive been watching it a damn sight longer than you, the very fact that you venture to suggest your batting lineup is stronger than ours means you know VERY little about cricket
0

but if it was argentina and greece , thts a diff story
greece definately desrevd the euro as they beat the best teams (hosts, defending champs and favourites).

brazil are the best and way better then argentina though as they won the copa with their C team. adriano will probably replace rivaldo now hes virtaully gone though.
0

Zapsta
Badges: 0
Rep: ?
#2379
Report 16 years ago
#2379
(Original post by Prologue)
(if this team and formation played out against the other ones on here on a FIFA 2004 simulation match i bet it would win)
Good contribution. Well done.
0

Iloveawaygames
Badges: 0
#2380
Report 16 years ago
#2380
Don't give the old "there different types of player so you can't compare" just who's best in your opinion?

I'd have to go for Zidane he seems to move with the ball like no other player does. He's also got more big game goals - World cup final, Champs league final! I know Henry aint really had these kind of opportunities and its not his fault but hey ZZ has done it. Also, ZZ can HEAD!
0
X
start new discussion
117 118 119 120 121