silentrevolution
Badges: 0
Rep: ?
#1
Report Thread starter 11 years ago
#1
The 'Summer of Rage' could be Lethal

On 20th Feb 2008 a caucus meeting was held at the German Parliament in Munich to discuss the Lisbon Treaty.

At this meeting a previously unmentioned paragraph was bought to light by Professor Schachtschneider, Humanities Faculty -University of Nuremberg.

Professor Schachtschneider, explained that the undisclosed paragraph means on ratification of the Lisbon Treaty the DEATH PENALTY will be reintroduced to Europe. The Death Penalty will be applicable for the crimes of RIOTING, CIVIL UPHEAVAL and DURING WAR. (When are we not at war and who will define riot and upheaval?)

The EU not-a-Constitution reintroduces the death penalty and not only in times of war, but for riots or upheaval. That gives governments a pretty free hand to use the death penalty - strikes, protests, vote of no confidence in the ruling party.

A quote from Helga Zepp-LaRouche in Executive Intelligence Review, 7 April 2008
Professor Schachtschneider pointed out that it [the European Union reform treaty, a.k.a. the Lisbon Treaty] also reintroduces the death penalty in Europe, which I think is very important, in light of the fact that, especially Italy was trying to abandon the death penalty through the United Nations, forever.

Schachtschneider points to the fact that this is an outrage, because they put it in a footnote of a footnote, and you have to read it, really like a super-expert to find out!

"Explanations relating to the charter of fundamental rights of the European Union".

The "footnote" in question, directly quoted, is as follows:

3. The provisions of Article 2 of the Charter correspond to those of the above Articles of the
ECHR and its Protocol. They have the same meaning and the same scope, in accordance
with Article 52(3) of the Charter. Therefore, the "negative" definitions appearing in the
ECHR must be regarded as also forming part of the Charter:

"Deprivation of life shall not be regarded as inflicted in contravention of this article
when it results from the use of force which is no more than absolutely necessary:

(a) in defence of any person from unlawful violence;
(b) in order to effect a lawful arrest or to prevent the escape of a person lawfully
detained;
(c) in action lawfully taken for the purpose of quelling a riot or insurrection."

"A State may make provision in its law for the death penalty in respect of acts
committed in time of war or of imminent threat of war; such penalty shall be applied
only in the instances laid down in the law and in accordance with its provisions…" 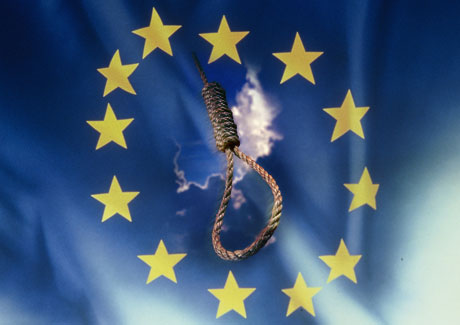 For one, the Charter doesn't apply to member states governments, only the EU and its agents exercising EU law.

The Charter is for the first time incorporated into EU law - it creates rights. If you believe this exception in the Charter can be used to reintroduce the death penalty, then by logical extension it must be able to be introduced by the EU now: a statement of rights cannot take away rights, and that is expressly stated in the Charter. The idea is, of course, ridiculous since the EU doesn't operate criminal courts.

Moreover, you only have to look at the text quoted: it doesn't allow the death penalty for rioting or anything else, it allows lethal force to be used to quell a riot or insurrection, which is surprisingly what every country in the world does. That is not a penalty.

Alasdair
Badges: 14
#4
Report 11 years ago
#4
I was going to say something, but as ever where misunderstanding of the EU is concerned, Lib got there first and better...
0
reply

Solid_Snake_100
Badges: 1
Rep: ?
#5
Report 11 years ago
#5
^^ While I dislike the Lisbon Treaty...this is incorect. Parliament would still have to create an Act of Parliament to allow such a penalty, and in the present libertarian climate, its pretty unlikely that it would do so.
0
reply

Teaddict
Badges: 17
Rep: ?
#6
Report 11 years ago
#6
We would have to remove ourselves from the European Convention on Human Rights if we were to agree to such a thing.
0
reply

L i b
Badges: 19
Rep: ?
#7
Report 11 years ago
#7
(Original post by Teaddict)
We would have to remove ourselves from the European Convention on Human Rights if we were to agree to such a thing.
True, and to do so would create a bit of a constitutional crisis in the EU, since so much - for example, judicial co-operation - hinges on adhering to the ECHR.
0
reply

hello1717
Badges: 0
Rep: ?
#8
Report 11 years ago
#8
Also, if you read it carefully, the bit about riots isn't actually about the death penalty. And it clearly says that STATES have to make laws regarding the death penalty. Which, let's face it, isn't going to happen any time soon
0
reply

Alasdair
Badges: 14
#9
Report 11 years ago
#9
The funniest thing about the 'bit about riots' is that if it wasn't included, the eurosceptics would be whinging about how "we'd have to follow stupid Euro-directives even in an emergency" etc, etc. And then if for some reason there was some sort of natural disaster, there'd be "My Granny got looted because we couldn't implement Martial Law" stories...
0
reply

Teaddict
Badges: 17
Rep: ?
#10
Report 11 years ago
#10
Alasair, it is not Ironic at all.
Because it means either way, the EU has told us how we can act.
Thus, the scepticism is,the EU should stop. Full stop.
0
reply

Sweyn Forkbeard
Badges: 19
Rep: ?
#13
Report 11 years ago
#13
Another person full of pithy phrases and empty rhetoric. If you take the time to read the text of what you have yourself quoted then you will see, as Lib rightly pointed out, that it says something completely different from what you have claimed.
0
reply