As well as the Cambridge Uni Guide we have a page on Cambridge Slang. Also see Standard IB offers for Cambridge. 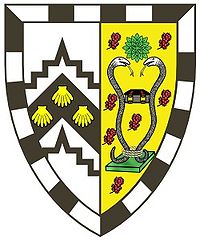 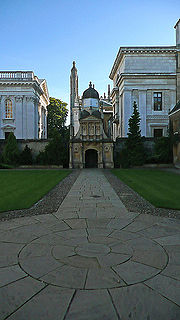 The Caius Old Courts are located between the senate house and Trinity College right in the centre of town. The college also owns property on Rose Crescent, Green Street, West Road, Mortimer Road, Glisson Road and in St Mike's/St Mary's Courts (opposite the Old Courts).

First years live in Harvey Court, K block or Stephen Hawking Building. Harvey court is a large building from the 1960s (image 1, image 2, image 3, image 4, image 5). The rooms range from 2 room apartments to rather small bedsits. There is a bathroom and a kitchen (gyp room) to share along a corridor (about 6 to 10 people). Some of the rooms have balconies and many overlook the extensive gardens (especially those in A block). Harvey Court was refurbished before the 2011 intake and all rooms are now en suite.

K block (image) was previously the home of the international students. It is a Victorian building, and is home to our new common room, which includes a pool table, LCD tv and an international telephone. The rooms range from really quite huge (some with 1 or more sofas) to quite small, but still with room to move about. Again, the bathroom and kitchen facilities are shared. Some music students live here too because some of the rooms have pianos. K block now is home to a variety of students, no longer just international

Finally, the new swanky hotel like building called The Stephen Hawking Building (image 1, image 2, image 3, image 4, image 5). This is a new multi-million pound accommodation building and conference suite. It is home to roughly 70 students. All rooms are en suite and a kitchen is shared between 6. It has automatic lighting when you walk into the kitchen or corridors and you open your door with an electronic card.

All of these buildings are in a group together, and they are next door to the home of the law, English, history, languages (and other) faculties (the Sidgewick Site), and about 10 minutes from the old courts.

2nd years generally live on Rose Crescent or Green Street, St Mary's Court, St Mike's Court or one of the hostels on Mortimer Road or Gresham. Rose Crescent and Green street rooms can be suites or single rooms, and are above shops or restaurants. Rose Crescent can be very noisy at night with many drunkards stopping off at the kebab shop "Gardies". The rooms are a decent size and in good condition. The rooms in St Mary's and St Mikes vary in size and condition. Some people share bathrooms with only 2 or 3 people, others with up to 10 people (L Staircase St Mary's shares 4 bathrooms between 10, for example). Both St Mikes and St Mary's are in a closed off courtyard opposite the main college so it's very secure. The hostels on Mortimer Road are large Victorian houses which are run by landlords or landladies, some of whom live within the house also. The rooms are large, and most of the houses also have access to a garden. Some second years also live in A block, Harvey Court.

3rd years live in the old courts or St Mikes. The rooms range from large sets or tiny cupboards, and are spread out through the three courts- Tree Court, Gonville Court and Caius Court. The most popular tends to be tree court because of the pretty views. The best rooms however are in Caius Court, overlooking the master's garden. Third years also get the pick of St Mikes or anywhere in non-first year accommodation, but they generally choose the old courts or St Mikes because these rooms are prettier and have more tradition.

All of the gardens in the old court and in St Mary's are for fellows only- mere students cannot step on the grass. Harvey Court gardens are vast and pretty, and are open to all members of the college. Behind the gardens is Springfield, an accomodation building belonging to Caius, and crossing the road from there is the fellow's garden. It is lovely and floral, with a croquet set and bowling green available. It is open for events such as garden parties.

The dining hall at Caius is very pretty, with wooden panelling all around, a wooden beamed ceiling and the pictures of some important men at Caius all along the sides- one side for arts and humanities, the other for science. This includes a painting of Stephen Hawking who sometimes visits hall for dinner.

The students dine at long tables, seated on benches generally, but sometimes chairs. Dinner is 3 courses, waiter-served and if you run out of vegetables or water you just hold up the jug or dish and a waiter appears to fill it up.

The college bar is situated in the Old Courts in the center of town and was voted as the best college bar in Cambridge by the Tab. It is open to college members and their guests 7 days a week. There are a range of lagers on tap as well as bottled ale and a selection of wine. The bar also sells confectionery.

There are two JCRs in Caius: one in the old courts and one in Harvey Court. The Harvey Court JCR is where we hold the bops and other college events. It is a big hall with a lighting system, a bar, 2 table tennis tables and a pool table. The Old Courts JCR is filled with comfy chairs, newspapers and is a good place to meet and have a chat, it is also incredibly soporific since the heating is always on very high. There is also an art room and common room on the West Road (Harvey Court) site.

Student affairs are handled by the GCSU- the Gonville and Caius student union. There are various officers such as the first year rep, welfare officers, LGBT officer and so forth. They hold regular committee meetings, and also open meetings which anyone can attend and get involved in.

The Cockrell Building is a beautiful white building behind Senate House. It is home to the Caius archives, library and one of the computer rooms. Students can take books out if they wish, or they can study at the tables in the library. Caius library is arguably one of the most impressive college libraries in Cambridge - it used to be the University Library. All major textbooks are there for all subjects, along with many supplementary texts.

There are 3 computer rooms at Caius. The main one is underneath the library. There are about 30 PCs and 5 Macs all of which are fast. There are also 4 printers. The internet speed is fast and the room is nice and quiet and comfortable.

The next best computer room is in Harvey Court. Again the computers are fast and there are printing facilities. The room can get a bit stuffy though. This room is open 24 hours a day.

There is also a computer room on Harvey Road for graduate students.

There is high speed internet connection in all rooms. There is a limit on full speed internet usage of 16Gb in any rolling seven day period. If you go over, you get an automated email and your connection will be throttled to a speed of 500Kbps (just enough for low bandwidth iPlayer) until your usage over the last 168 hours (i.e. 7 days) has gone back below 16GB.

Over half of the rooms also have access to the University wide WiFi networks which are not limited (well, 15GB a day...).

Caius was declared the 12th sportiest Cambridge College in Michaelmas 2009 by The Tab. See The Tab article: The College Cup revealed Caius is also known for having one of the best boat clubs in the university.

All freshers have college parents who are available to offer help and support whenever it is needed. The GCSU also has a welfare team who deal with thing such as sexual health, stress management and so forth. There is also a welfare phone which you can text if you have any problems, and a welfare tea in the library every week with lots of snacks and yummy food! Welfare team members will put condoms or pregnancy tests in your pigeon hole when and if they are needed. Or if you prefer anonymity, they can put them in their own pigeon holes. Every student also has a tutor, who is there if you have any pastoral problems, such as if you are stressed, depressed, unwell and so forth. They also have a director of studies who is available for issues to do with academic affairs such as the heavy workload, problems with supervisions and so forth.

Caius is also known for its friendly and welcoming atmosphere. This is in part due to the tradition of everyone eating regularly in hall, which b some people is seen as a nuisance, though the majority enjoy this on the whole. People are proud to be at Caius, and there is real support for all our sports teams. Caius has the nice traditional feel to it, with its nice old buildings and crumbly fellows, but it isn't backwards as other colleges may be.

Caius also has one of the best and most sought after may balls in Cambridge.

Caius is a lovely friendly college. Everyone is proud to be there and so support Caius in all things. Often people say that Caius is the medical college, because we have some of the best supervisors in that area and accept many med students every year. It may well be true, but Caius is strong in all areas. I personally study law, and I am lucky to be supervised by some really intelligent people who are very prominent in their field (although that probably can be said for most colleges).

Caius is a good college because we are right in the centre of town, so close too most facilities. The buildings of the old courts are magnificent, built in the style of a French Chateau. All of the accommodation belonging to Caius is comfortable, but some rooms are better than others (Stevie H building is the best!).

Our boat club is very successful and is sponsored by linklaters, one of London's leading law firms. Our rugby team is also very successful. Caius is a very good college academically, coming second in the league table for 5 years running. Having said that, it is not all work. There is plenty of time to relax and have fun, and people seem to remember Caians for those very two things.

I really like Caius, as you can probably tell. My one complaint would be the food- it isn't very nice- but that can be overlooked :) (edit from a 2015 Caian: The food is really good now!! Seriously, ignore the haters who say Caius has a bad food rep - it isn't true anymore. Chocolate Brownie and salted caramel ice cream for dessert!!). I'm really glad I chose this college, as are most people it seems. It is a really friendly, atmospheric college with a good history and stunning reputation.

Look up Gonville and Caius in the CUSU Alternative Prospectus

Pros and Cons of Gonville and Caius

Poll
Has advance information helped during your exams?