Manchester Academy and Harris College, or "Harris Manchester", is the most recent addition to colleges of Oxford University.

The college began life in the city of Manchester in 1786, and has since been located in both York and London; only making Oxford its home in 1889. In 1990, the college was given Permanent Private Hall status, and finally progressed to full college status six years later.

Harris Manchester is situated on Mansfield Road, close to its junction with Holywell Street. It is within five minutes' walk of various faculties, libraries and gardens; including the Bodleian library, the English faculty, the History library and the University Parks.

The college has the facilities to accommodate all of its first- and third-year undergraduates, and most second-years who require accommodation are also catered for. In the event of there being more second-year students wishing to live in the college than there are bedrooms available, lots are drawn to ensure fairness. The college also aims to house first-year postgraduate students if possible; and there are plans to expand the college's accommodation further still. At present, and despite the relative likelihood of its students being married and/or having dependents, the college does not yet have any married- or family-accommodation. Students are not normally permitted to live in college during holiday periods, except in very specific circumstances which may necessitate it; but students may store some of their belongings in college, with the agreement of the housekeeper. No student is obliged to live in college for any part of his or her course if he or she does not wish to do so, but must reside, according to University regulations, within 6 miles of the centre of Oxford.

Most of the study bedrooms (around 50 in number) can be found within the college's own seventeenth-century houses, and there are also around 30 bedrooms available within the newer buildings. All student accommodation, whether older or newer, is on the main college site (i.e. the college has no separate hostels or houses). All rooms are equipped with hand-basins and central heating; and all are provided with an ethernet connection and a telephone link (to be activated at the student's request). In addition to the personal facilities, the college also has a communal launderette and computer room. No pets are allowed in college.

The college takes a somewhat stringent line in avoiding fire-risks: in addition to the usual non-smoking policy (which applies within all college rooms, not just the bedrooms), candles and any other naked flames are also prohibited within the college bedrooms. All rooms are fitted with smoke alarm.

There is a student guest room available, which can be booked if students are expecting visitors, but students are also welcome to house guests in their own rooms for up to three consecutive nights per term. Guests may also, for a fee, dine within the college's dining room at meal times on any day, although Monday and Wednesday are the official 'guest nights'.

Accommodation charges during the 2006-2007 academic year were £1310 per term, or £3930 per annum. This fee includes the use of a single bedroom (with no extra bills) during term time, and seventeen meals per week (3 meals per day, Mon-Fri; breakfast/brunch Sat-Sun).

The gardens of Harris Manchester, whilst admittedly not akin to the sweeping lawns of Trinity or the deer parks of Magdalen, do still have a unique charm of their own. Due to the arrangement of the buildings, there are numerous quirky green spaces around the place, which make for great privacy if you're looking to study out of doors; though, as depicted, there are also some larger green areas as well.

The college, despite having the smallest student body of any Oxford college, has a thriving JCR with its own 'Entertainments Officer' who is in charge of organising such communal events as parties and theatre/cinema trips amongst other events. There are also various societies run by Harris Manchester's students, including film and wine societies. However, if the idea of continually socialising with the same 150 students is not to your taste, don't forget that there are plentiful opportunities to socialise with students from other colleges via larger, inter-college societies and clubs, and also via sport: Harris Manchester students have represented the University as a whole at a variety of sports and activities. Within the main college buildings there is also a bar, and two further communal rooms. 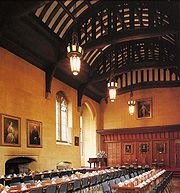 For students resident in college, it is not possible to be self-catering; though they may sign out of a small number of meals every term and receive credits in lieu of said meals, and small kitchens are provided for students to make their own small meals and snacks. Dinner on Mondays and Wednesdays is a formal meal, and differs from normal dinners in the inclusion of Grace and the wearing of academic gowns. The College prides itself on the quality of its food and makes an effort to cater effectively for vegetarians and those on special diets.

The college's chapel is home to a fine organ, attractive wood-carvings, and stunning stained-glass windows and fine organ; and is known for its welcoming and liberal style of religion. Staff and students participate in a variety of weekday services (on Monday evenings and Friday mornings). All college members, plus their families and friends, are welcome to all services; and people from outside the college are also particularly welcome to the Monday evening services.

The Library is divided into several distinct collections:

Poll
Y13's - If you haven't confirmed your firm and insurance choices yet, why is that?