Hertford College is on Catte Street in central Oxford. It comprises three quadrangles: Old Buildings (OB), New Buildings (NB) and Holywell (HW). OB quad is linked to NB and HW quads via a bridge, popularly known as the Bridge of Sighs, which spans New College Lane.

The College is in very close proximity to popular Oxford sites such as the Bodleian Library, the Radcliffe Camera, the Sheldonian Theatre, and the Kings Arms and Turf Tavern public houses.

Hertford College guarantees to provide accommodation for its undergraduates for the duration of their course. All rooms have sinks and mirrors, and there are communal bathrooms, toilets and shower rooms on most staircases and corridors.

There are three main areas of accommodation: the main College site, the Folly Bridge site and North Oxford.

Most 1st years are housed in Holywell quad, and the remaining ones in NB quad. Rooms in Holywell quad are in general not huge, but most people find them cosy and agreeable. The rooms in NB quad are generally furnished to a higher standard, and house finalists as well as members of the JCR executive committee.

There are a few rooms in OB quad, but despite them being quite nice, are rather variable in size, and are quite isolated from the rest of the college.

The main disadvantage of living in college is that there are limited kitchen facilities: the only oven is in the JCR kitchen, and there is only a couple of other rings in NB3, NB2 and HW2. Most staircases have microwaves and fridges, however. Most people eat their meals in Hall for this reason.

This site is down by the Isis river, and it is handy to live there if you are a rower for that reason. There are two college annexes or "halls of residence" called Warnock House and Abingdon House. There are also a couple of college owned houses on Abingdon Road and Western Road.

Warnock House also serves dinner in its dining room, and the food is of superior quality to that in the main college hall as it is cooked by a beloved single chef, Nigel, with whom students have a good relationship.

The college owned houses are good for groups of friends who want to live together, and are of good standard as well.

North Oxford houses are on Leckford Road and Banbury Road, just north of the science area.

There's no point denying it - the North Oxford houses are generally the least desirable of all Hertford accommodation (save for a couple of rooms in college). There are a couple of huge rooms in the Banbury houses, but most rooms and kitchens are fairly small.

That said, it is unlikely you will be housed there, and even if you are, there is a definte community spirit of people who live in North Oxford, and the parties are good fun!

The JCR (Junior Common Room) is in Holywell quad, and is the common room for undergraduates. It has two areas: the main common room area with plenty of soft seating, a pool table and Sky television, and the computer/table football/kitchen area. The room is not amazingly popular during the day, although there is always someone in there when you go along, especially 1st years. The most popular times are weekend evenings, during televised sporting events and late nights. Tradition dictates that those returning home from clubs visit Hassan's kebab van on Broad Street, and then congregate in the JCR to munch their snacks and trashy television.

Hertford Bar is in the basement between NB and Holywell quads, and despite being of limited size, it has several rooms - the main bar area, the sign room, the back room, the poster room and the sports room. The bar is usually not hugely patronised before 9:30pm, but on the most popular nights (Wednesday-Friday), after 10pm it is often hard to move.

OB quad is the most pleasant of all Hertford's quads, with a neatly kept lawn and well-maintained shrubs. In the summer, lazing on the lawn is a popular activity, and at other times, many sit on the benches around the quad. Since the quad has the staircase to Hall and the college lodge, many people meet bump into each other before or after meals and end up chatting.

There is a small college gym for light workouts, but you'll need to join the university gym for anything more serious.

Meals in Hall are on a pay as you go basis by scanning your bod card at the till. The food bill you rack up in one term gets put on next term's invoice. 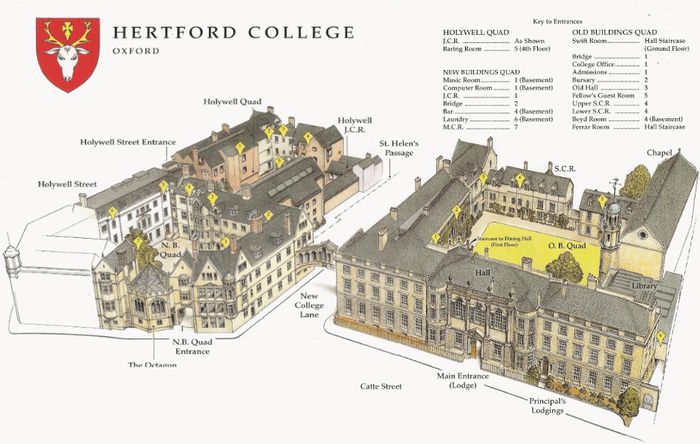