An enviable location with secret perks, Lady Margaret Hall is located a brisk 10 minute walk north of the centre of Oxford, bordering the northern edge of the University Parks. Don't be put off by the relative distance from the centre (by Oxford standards), the college is very close to the Science area and the English faculty, and has the nightlife of Jericho on your door step. Bars, delis and the Phoenix Picturehouse only a few minutes away. It is far enough away to have a tranquil setting, yet close enough to be convenient for everything bar rowing! LMH is situated next to the river Cherwell. It is a tourist-free zone in the summer!

Fantastic new entrance and quad opening in Spring 2016. First 3 years of undergraduate students are guaranteed accommodation, thanks to the completion of the new Pipe Partridge building. Accommodation is randomly allocated in the first year, and to use a cliche is a 'mixed bag', ranging from ensuite to box rooms near to the usually raucous 'Hell's Passage'. The rooms in Pipe Partridge, however, are especially nice. Second, Third and fourth years pick rooms according to the room ballot list. Accommodation is reasonably priced at around 1150 pounds a term. However, staying in college during vacation can be very expensive, as it costs about 18GBP per day. The Georgian beauty of the college and its hugely friendly atmosphere more than make up for it.

The front quad is a frequent hang-out in the evening, whether to annoy the porters by smoking in the 'enclosed' space or to have a midnight picnic.

The college bar is fantastic with reasonable prices, table football, pool, massive TV with sky and IT Box, and a great atmosphere, though it's rather male-dominated - more women-only nights are perhaps needed!

The JCR is good; it has a decent-sized TV but is perhaps under used (although maybe that's because most of the college is immune to the charms of Mario Kart). The college tradition is to congregate there for Top Gear on a Sunday afternoon. The JCR is located in Pipe Partridge, and has a wide variety of newspapers/magazines, a table tennis table, Wii (inc. Guitar Hero and mario kart), really well-stocked DVD library etc.

The MCR is rather larger than the JCR, consisting of an open-plan space containing a football table; four sofas; one armchair; coffee tables; a dining table that seats 8-10 people; numerous bookshelves housing the well-stocked MCR library; a kitchen with hobs, an oven and a microwave; a separate WC; a chest of drawers containing the DVD library; a Playstation 2 and a Wii; a desktop computer with broadband connection; a goodly-sized LCD TV; and a wireless connection to the college intranet. The MCR is located in the Kathleen Lea building.

Some of the more modern accommodation (notably Kathleen Lea and Sutherland) also have their own separate modern kitchens where people are able to meet socially.

The Library is extremely well-stocked, particularly for English Literature and languages, and most usefully is open 24/7. The checkout system is self-service, whereby you scan your Bod card under the laser followed by the barcodes of the books you wish to take out. You return books by placing them in the returns postbox inside the library.

The library also has a photocopying room, which as well as photocopiers is also equipped with 6-8 computers, with broadband access and printing facilities. There is also a computer room in Old Old Hall, which can be reached by walking through Eleanor Lodge. This also has approximately 6 computers with high quality printers, photocopiers and scanners. All printing and photocopying costs are deducted from your Bod card. Work stations have nice private seats with garden views.

There is also a desktop computer located in the MCR, which is only accessible to MCR members and has broadband access. Almost all of college can pick up OWL, the college intranet, except perhaps on the higher floors and in older buildings such as Old Old Hall.

The MCR elects two welfare officers per year, one male and one female, for the members of the MCR to turn to for advice.

There is also a college nurse and doctor located on site. Unfortunately there is no system for booking appointments in advance - you have to sit and wait until someone is available to see you. Average waiting time during a weekday is 30 mins.

The atmosphere at LMH is perhaps its greatest asset. The college was known as the 'party' college a couple of years ago and while the students there still have a good time, it is also a hard working college with a fantastic and friendly atmosphere. The college has a slight reputation for being overly-hard on students - part of a drive to bring the college up the Norrington table - but this has been exaggerated. Staff are friendly and understanding. Most of all, perhaps due to its slight isolation, there is a fantastic sense of community in LMH, everyone knows each other and everyone makes a real effort to be friendly. The gardens in the Trinity term provide an idyllic backdrop to parties and punting expeditions.

Facilities are good; 24/7 library, decent provision of computers, catered meals provided three times a day on every weekday plus for Sunday dinner, fantastic formals, a great college bar, a decent JCR, and enough societies and sports teams to keep anybody interested. A newly built theatre is great for student drama, lectures and concerts. Visiting theatre groups often stage their summer productions on the college lawns.

If you're the organ scholar, you have a big room on Talbot corridor, which is quite nice. Its also nice for everyone else, as there's another music student room on that corridor too, so most times you walk down it there's someone playing.

LMH's community feel, extensive grounds, and relaxed atmosphere makes it a fantastic college. Out of my fellow freshers I know of no-one who has struggled to fit in and the people admitted are diverse enough that you will always find people with similar interests (and no, that was not a contradiction :-)). Perks include Benedict Cumberbatch and Emma Watson as visiting fellows, plus two pugs on site (they belong to our principal, Alan Rusbridger) to help de-stress during exam time.

Check out our video here: https://www.youtube.com/watch?v=q7oNFkMdRBA 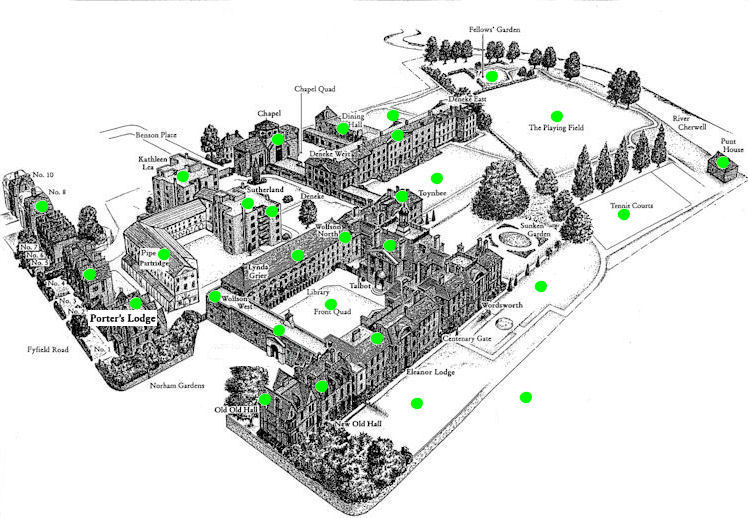