Formed in 1427, Lincoln's full name is The College of the Blessed Mary and All Saints, Lincoln. Lincoln is an intimate, close-knit college, beautifully situated at the heart of Oxford. The college has something of a reputation as a recruiting ground for spies (although there's no evidence to substantiate this), as well as being the setting for the Hardy novel Jude the Obscure, and was the first Oxbridge college to admit a Jewish fellow. Famous alumni include Howard Florey (in the development of penicillin), John Radcliffe (Oxford physician extraordinaire), Rachel Maddow (US TV host) and Dr Seuss. It was also one of the first men's colleges to admit women in the late 1970s.

Lincoln college is located on Turl Street, in the heart of the city centre. It is close to several other colleges, including Jesus, Brasenose and Exeter. Together with Jesus and Exeter, Lincoln forms one of the Turl Street Colleges, which together cohost the yearly Turl Street Arts Festival, a week of musical performances, drama and poetry. Lincoln shares a jovial rivalry with Brasenose - the two colleges back onto each other and we invite the whole of Brasenose for a drink once a year to Lincoln, as a mark of the anniversary of our rivalry!

Lincoln provide college accomodation for a guaranteed three or four years. First years live either in the main college, where the rooms are small, but very pretty, with ensuite - apparently some can be a bit noisy in the summer when everyone is sitting out on grove quad while you're trying to revise for exams- or else across the street, in Lincoln house/Staircase 15, which now too are newly refurbished, (almost all) ensuite and have a great sense of community. Some overlook the pretty Turl Street, others don't have views that are as great but are very spacious. Although the year is split up in terms of accommodation in first year, because the year is really small, you still get to know everyone extremely well. In fact, it's pretty nice that the accommodation spreads across the width of Turl Street as you get to feel that the whole street is part of Lincoln.

Second years mostly live in the Mitre rooms, which are slightly further down Turl street, and aren't amazing, but are mostly quite decent; the vast majority aren't ensuite, but they all have a sink in them. Although the rooms might not of 'incredible quality' in 2nd year, living in the Mitre is an unforgettable experience. It's basically a giant maze (emphasis on the maze) of rooms - some tiny, some massive - but the great thing is that you're all living together. Lincoln's one of the few colleges that provides accommodation for all years of your course, and living altogether in one building in 2nd year makes this even better! The sense of community is incredible and it feels really cosy! That being said, there's not always enough space for everyone to live in the Mitre so some people live in Bear Lane, which overlooks the High Street (literally a two minute walk away from college) - but in fact, as the rooms are bigger and of nicer quality here, there's always a few people who actively choose to live here, so you'll almost certainly be in the Mitre if you want to :)

Third and fourth years mainly live in the college houses slightly (10 minute walk) out of the town centre. The houses in Museum Rd (just before Keble) are all modern with individual ensuite bathrooms and a reasonable kitchen and best of all provide scientists with only a 2min walk to lectures! A few people live in Bear Lane in 3rd year instead - very convenient as you're in the city centre, although slightly away from the rest of the year. If you are wary of organizing private accommodation in your final year, you should note that Lincoln is one of relatively few colleges in Oxford to guarantee all undergraduates three years of college-owned accommodation.

All rooms have ethernet and pretty good WiFi - and most have internal phones as well. First year rooms are allocated randomly, while in subsequent years, there's a room ballot, and everyone chooses their room in the order they're drawn. Everyone pays the same rent, regardless of what room. Rent is approximately £140 per week including utilities. This sounds pretty expensive, but this is the Oxford college average, and it's amazing to be living right in the centre of the city.

We have bops twice a term in Deep Hall, our massive college bar - one at the end of 0th week before term, and one on Friday of 8th week at the end of term. Bops are basically huge parties with all the undergraduate students from college, featuring fancy dress costumes and much cheesy music! They're really great fun as you're with all your friends and people look wonderfully silly in all their inventive hand-made costumes - it's great because everyone seems to put in quite a bit of effort to make something interesting from whatever cardboard/paint/Primark goodies they can find. Even if you think fancy dress isn't your thing, you'll find bops are amazingly fun! Every bop ends with a very enthusiastic rendition of 'Lincoln til I die' - as you can see, we do like our college. Examples of past themes: School Disco, Mardi Gras, Medieval, Uniform Bop, Nightmare Before Xmas, Emergency Services, 50s, Dress as the Initials of your name, Around the World, Song Lyrics etc

Throughout the term too there are events put on by the ENTZ (entertainment) team every week, for example frequent free drinks events in Deep Hall, Valentines day drinks, 'pub quizzes' in Deep Hall, Halloween party, Christmas party, room race (an evening of people setting up themed games in their own rooms and teams running around to complete them - wild but hilarious!) - you'll find there's always a college social event to look forward to! :) The ENTZ team also organise Freshers Week, which includes a large range of activities from clubbing to trips to G&Ds, the local ice cream shop!

If you're not much of a 'going out' or 'partying' person, that's no worry at all and you definitely won't be out of place at Lincoln. As the college is so small and tight-knit, with everyone living a minute's walk at maximum away from each other, a lot of our socialising is done mainly chilling out in rooms, watching films, hanging out in the common room (also itself called 'JCR') etc :) As there are college societies like languages society (which often runs film events open to everyone), the Turl Street Arts festival, college music, college welfare events and the knowledge that everything in the city centre is so nearby, there's plenty of other social events to get involved with too :)

Emily Carr parties are technically grad parties, but the JCR can go as guests as MCR members and are generally fairly welcome (you can just turn up and no-one will notice). Basically, Emily Carr left a load of money to Lincoln when she died and one of her conditions was that they threw parties in her name (once a year/termly? I'm not sure) with free alcohol. Personally, I think it's a great way to be remembered!

Lincoln has a great underground bar, cheap (£1.90 a pint), full of atmosphere and very large but cosy. It's always really full and a great place to go in the evening for a quiet drink and chat or to watch the football. Of course, if you fancy a few noisy drinks, possibly followed by a club, it's a great place for that as well. On top of this there's table football and pool for 20p a go, as well as a quiz machine.

we have active sport/music/drama societies and people don't work all day! To give you an example, this term I'm in 2 plays, writing for a science magazine and am also involved in the production aspect of an opera. Other ppl I know, play netball and sing in the college choir and someone I know rowed for Oxford & Lincoln, was a member of the Oxford Air Squadron, regularly went on Business trips (he also has his own business) and still got a first (but he is immensely clever)!

Lincoln has a men's and women's boatclub, men and women's Football club, Rugby team, Pool, Darts, Squash, Mixed Lacrosse, Croquet, Netball, men's & women's Tennis teams. There's a large sports ground up in Cowley, and all students get free gym membership to the university gym, which is a 5 minute cycle or 20 minute walk away. There are also a number of unofficial teams including ice hockey, riding, sailing, badminton and kayaking, which are sporadic (appearing and disappearing year to year - but well supported by the JCR).

Architecturally Lincoln's library is one of its best and most beautiful features. At some point the college bought an 18th century church next door to the main site and (somewhat controversially) converted it into the library. The fairytale-like spire is visible all over Oxford (good to have a landmark you can circle when you send postcards to relatives in your first term!) and it's always a good place to show visitors (quietly) to impress them with your beautiful college. The library is a great place to work - everyone is focused but it has a relaxed atmosphere, although daydreaming in the magnificent surroundings is very easy to do! In terms of the book provision, Lincoln is fairly typical of all the Oxford colleges of having all the core material texts and the majority you'll need as a scientist, but for humanities students the university libraries (very short walk away) will be where you get a lot of your more specific books.

There are a few computer rooms around college, one in Bear Lane (mainly grads), one in the rooms opposite college and one on the other external site on Museum Road. They are all fine and the college computer officers are very helpful. There are network connections in every room - you can use an Ethernet cable, but there also is Wifi signal which is pretty good everywhere in college.

Lincoln's atmosphere is apathetic and fairly relaxed with a good work-play balance - we're not as work crazy as Merton, but we have done well in the Norrington Table for the last few years, especially for a small college, so like everywhere at Oxford, we do work hard.

You pay £3.95 a dinner for 6 dinners a week for the term ahead at the start of term.

Dinners are all three courses, and generally pretty decent. You get refunded for up to 24 dinners a term if you miss some - no one has all of them. Breakfast and lunch you use your bod card, and then pay for it at the start of the next term- lunch is about £1.50-2.50 depending on what you have and is generally pretty good. Breakfast costs about the same, and is a bit rubbish- buy a box of cereal and eat it in your room instead. You can also buy baguettes and burgers and stuff from the bar on your bod card at lunchtime, at pretty reasonable prices (£1.80ish for a baguette). 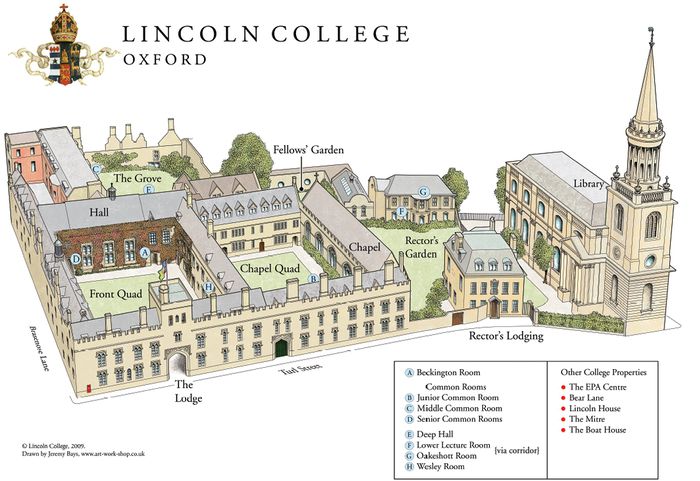 What is your favourite chocolate?

How To Choose a Uni Offer

Poll
What is your favourite revision method?