Merton College is situated just off the High Street, spanning most of the south side of Merton Street. The college backs onto Dead Man's Walk (along the North side of Christ Church Meadows), and has a back gate on Rose Lane.

Accommodation is one of Merton's strongest selling points. College heavily subsidises the cost of accommodation, meaning it has some of the lowest rents in the University, roughly £1000 / term. All First years are housed on the main college site, either in Rose Lane, or in Merton Street . By university standards, the rooms are large and well-situated. Rooms are randomly allocated, and all cost the same.

Second year is in Holywell as decided by a publicly held ballot. You can choose to go in a group of up to six or as an individual with most opting for the latter (i.e. you are guaranteed to have consecutive positions in the ballot, facilitating the possibility of choosing the same house). For 3rd year the ballot is reversed so if you come bottom second year you should hopefully get a palace in the third year in college to make up for it, though you can choose to stay in Holywell (oddly, this is not done at most other colleges). As to the actual second year rooms they are said to be of a relatively high standard although they do have a fair variety. The major thing appears to be that two of the houses do not have kitchens and so if you're unlucky you end up in one of those houses.

Graduate housing is also in Holywell Street but unlike 2nd year undergrads, grads are put up in a recently purpose built (1995) accommodation block. Most rooms are quite large, all are en-suite and quite a lot are sets. Less lucky graduates live in houses on Manor Road 2 minutes walk from Holywell (next to the Social Sciences building) where accommodation is still of a high standard but rooms are somewhat smaller and it is quite easy to feel excluded from the goings on at Holywell. All first years are guaranteed accommodation in either Holywell or Manor Road (roughly an 80:20 split). In subsequent years, graduates needing housing enter a room ballot where lower years get priority over higher years. The way it generally pans out is that all second year graduates who desire accommodation receive it along with a good handful of third-years. The prospects for higher years are usually bleak, though by that stage several graduates have chosen to live out anyway.

There are two libraries at Merton:

MOB library - oldest continuously functioning library in europe, has many strange and mysterious things on the top floor. Not particularly big, and they are strict about bringing drinks in.

OWL library - Old Warden's Lodgings - the warden used to live in a huge house just across the road, which has now been converted into a second library. There are lots of tables and ethernet connections, and it is a good quiet surrounding to do work in. Computer and printing facility in the basement. It closes at midnight.

You are practically overflowing with people offering you 'an opportunity to chat at any time'! Welfare tea every Sunday - free sugar-loaded snacks to get you between brunch and Sunday formal (and no you don't need to be in need of welfare to attend!)

Merton has something of a reputation for being work-absorbed and the place where 'fun goes to die'. In reality, the reputation is based on a tiny difference in results caused by perhaps 1 or 2 more people getting a first, and the student body is just like any other - a group of young students looking to make friends and have a good time! The bar is certainly more lively than many, the games room is generally populated at most times of day, and even the most die-hard party animal would find his/her place!

Facebook being banned, Internet being banned/monitored, They lock the gates at 11pm, You are checked in an out of the library to record how much time you spend there, You get a better room if you get better results (ironically, other colleges DO do this...), Only superhuman students apply here, They teach you to write with your left hand for when your right hand gets cramp from too many essays (made this one up myself :D )

Feel free to make up some of your own - everyone else does...

Merton combines forces with Mansfield college in most sports. The Merton-Mansfield cricket team won the first division in 2008 and were joint winners in 2009 (still to be confirmed). They also reached the Cuppers final where they lost narrowly to Worcester. The rugby team is also successful, reaching the 2008/09 cuppers bowl final. There are two football teams which aim to cater for all levels of ability, but the first XI tends to be mainly comprised of Mansfield students. Also basketball and hockey teams exist, the former of which has enjoyed a slow but steady rise toward greatness over recent months.

As with all colleges, the men's first boat take their rowing very seriously, but lacking large numbers of 6ft 6 beasts are not as successful as other colleges. Other boats facilitate some less intense opportunities to make yourself a true oxford stereotype. The Merton 2nd boat won blades at the 2009 summer eights competition.

Generally pretty dominant at bar sports - a consequence of having both a free table football table and pool table (rare). The Merton darts team became the most successful Merton sports team after gaining promotion for the fourth consecutive year in 2009, with some team members also representing the University in the Varsity darts match.

Hall All meals served in hall. Breakfast could be better, but lunch always gets a good reception from non-mertonians. Early supper is an informal 2 course evening meal for £4, and formal hall is held 6 days/week - try beating a 3 course waited-meal in formal dress for £4. Always an excellent atmosphere and decent food - sometimes really good, sometimes the chef goes a little mad with his combinations (but would be boring otherwise, right?).

Music Society For a relatively small college the music society is very good. The College orchestra, open to everyone, rehearses each Saturday. There is a non-auditioning choir and auditioning choir, and then there are opportunities to set up other groups if you want to. The music society gets money from the JCR each term which pays for hiring music and buying food for rehearsals etc. There is a concert each term where orchestra, choir, and a few individuals perform things, and there are also smaller weekly recitals where you can play anything.

The disadvantage of being a small college is that the orchestra is quite small, and this year there are possibly more flutes than strings. But some people from other colleges do join, and enough people are always persuaded to play in the concert. In some ways it's really beneficial, because it means everything's quite informal and it's very easy to get involved.

University-wide there are a lot of orchestras and groups. There are auditions at the start of Michaelmas for the university orchestras which are quite competitive, generally post-grade 8. You do one audition in front of a panel and get assessed for all the orchestras at once. You can usually play in any college orchestra, especially if your instrument is in demand.

Boathouse Merton shares a boathouse with Worcester, and currently owns 5 eights boats. As with most sports at Merton, participation alongside a little 'banter' is generally more encouraged than actually winning, although the first boat is by no means shabby.

Sports ground Merton's sports ground is near St Catz, which, when you consider where some teams have to travel for home games, is very well situated. Football pitches, rugby pitches, tennis courts, cricket in the summer complete with pavilion, squash courts, and the hall is often used for dance. This is also where the BOPs are held.

Games room It is doubtful whether any other college can boast a free pool table, a free table football table, a free table tennis table (located in the JCR) and a brand new PDC approved dartboard with its own lighting. Consequently, the 4 Merton pool teams, 3 table football teams and the darts team tend to be quite formidable. Quiz machines and classic arcade games can also be found in the games room.

TV room New HUGE TV as of February 2009. Complete with leather seats and a kitchen in the next room. 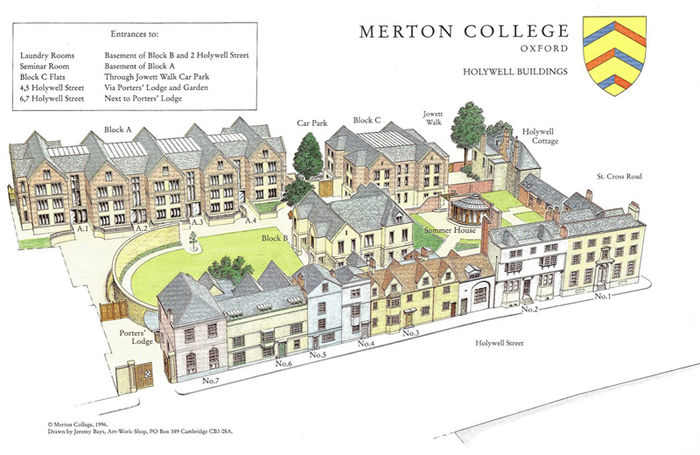 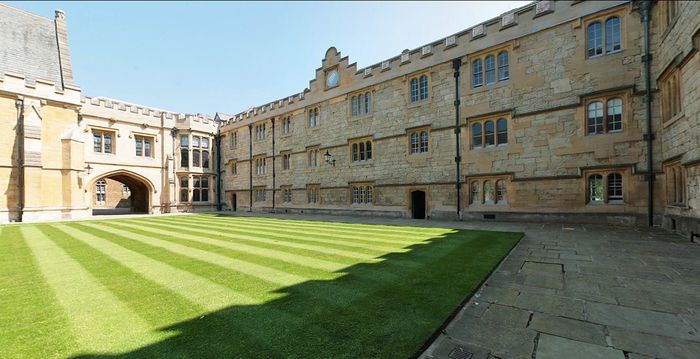 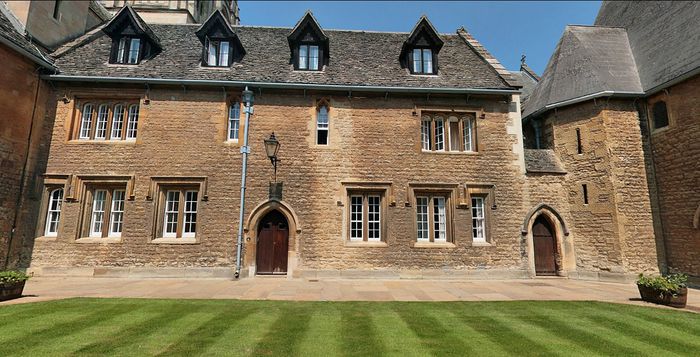 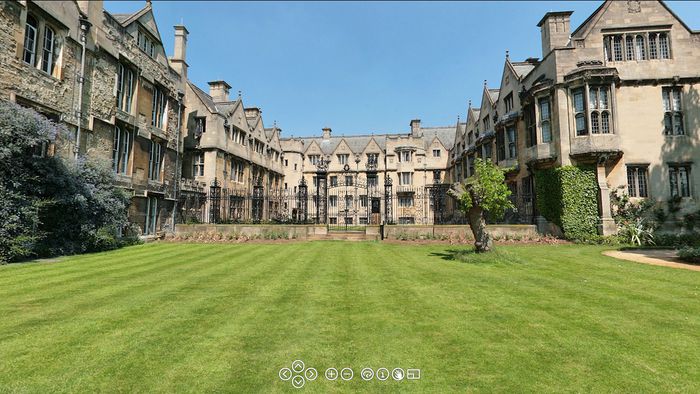 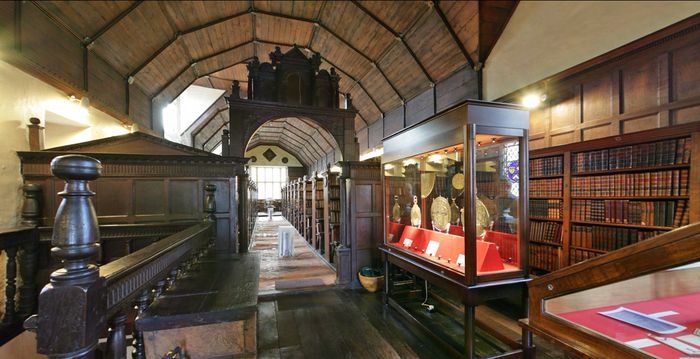