Wadham was founded in 1610 by Dorothy Wadham, widow of Nicholas, at the behest of his will. Since then, Wadham has had its fair share of famous alumni (and alumnae), tutors, and Wardens, as well as being part of the first group of historically male colleges to go mixed. In the past, the JCR has been known for student radicalism, but you're more likely to find budding journalists and thesps in the bar than communist revolutionaries.

Admittance:Men and women (undergraduates and graduates)

Wadham is on Parks Road, close to its junction with Broad St; and just a few moments walk from the Sheldonian, the Bodleian, the Radcliffe Camera, the University Parks and the labs of the Science Parks. Neighbouring colleges include New, Hertford, Harris Manchester and Mansfield.

Most of the rooms on the Front quad are shared, but have really big living rooms (ditto some on the Back Quad); the dedicated rooms for pupils with disabilities are nice and well adapted; the modern rooms on the Bar Quad vary in size, but are all big enough (far bigger than rooms at other unis!) and every room - EVERY room - is unique.

Merifield is a complex of flats primarily lived in by graduates and visiting students, although there are some undergraduates. These flats are 4 or 5 bedrooms with shared bathroom and kitchens. They are of a high standard for student accommodation in the UK, and are very reasonably priced. Merifield is about a 10-15 cycle ride from the main college, or there are buses running regularly along Banbury Road.

The JCR Quad houses a number of Wadham's social amenities: the JCR, laundry room, JCR kitchen, the bar, a squash court and the Moser Theatre, which doubles as a badminton court.

The MCR (4th year undergraduates and all graduate students) also has a sizable social area which is currently in the old Holywells restaurant. This has a well equipped kitchen, bar area and loads of seating. The MCR is going to be extensively renovated in the coming 3 years.

Wadham's library is self-service and open 24 hours, as is the computer room, with access gained via students' Bod cards. It is found behind the main college building in a modern building designed in the 1970s by Gillespie, Kidd & Coia. There is a bean bag seating area overlooking the gardens and plenty of study points with desk lamps and ethernet/wireless internet access.

The library has most texts an undergraduate could expect to need during their degree. Unlike the Bod, books can be loaned via a self check out point and there are no fines for overdue texts. You can also request that the library buy books which are not currently in their catalogue.

The library is also home to archive materials and the Persian/Iranian research collection.

Wadham has excellent welfare provision. There are elected welfare officers on both the SU and MCR committees. There is a general welfare room, as well as a men's room and women's room. These rooms serve a number of purposes since they are not only offer welfare advice (leaflets) and 'supplies' (including free rape alarms, sanitary products, condoms and dental dams), but they are also a place to stay if a student not living in college is unable to get home late at night.

The college also has a nurse who runs an open surgery.

Wadham is well-known for being liberal, progressive and friendly, with a relatively high number of state school students. It is one of the largest undergraduate colleges, and was one of the first all-male colleges to accept women; it hosts Queer Festival, formally Queer Bop, (Michaelmas) and Wadstock (a twelve-hour live music festival held in Trinity). It also has one of the best reputations for entz in the university, hosting bops five times per term in Michaelmas and Hilary. They are sufficiently popular that entry is restricted to Wadhamites only (apart from the ticketed Queer Bop and Wadstock).

Wadham also has some of the friendliest porters in the university, and the Lodge sells excellent fair trade chocolate bars. 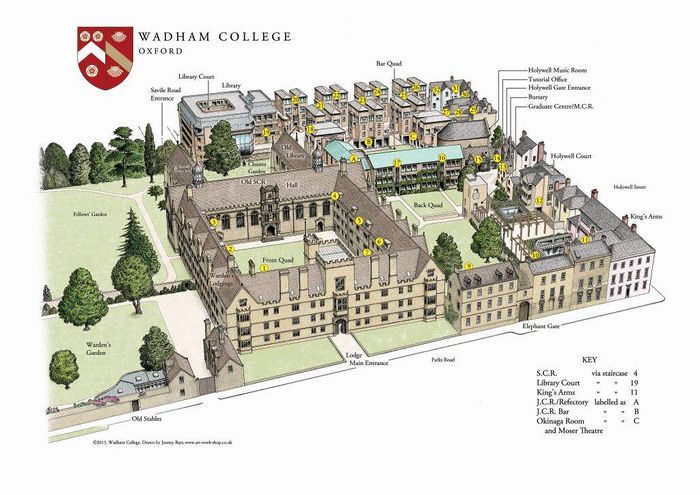