What to expect from UK university life as an international student 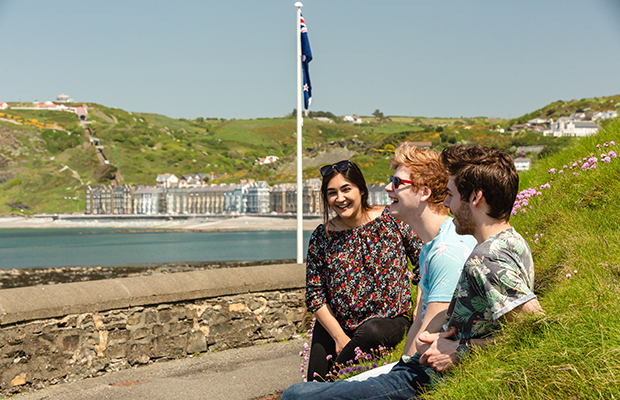 So, you’re thinking about studying in the UK? Life here will be a bit different from what you’re used to, which is why we’ve put together this guide.

Below, you’ll find advice on what to expect when you come to a UK university - advice that’s been inspired by the experiences of The Student Room’s own community of international students.

In compiling this feature, we’ve also enlisted the help of Aberystwyth University’s Marian Gray. In her role as head of global opportunities at Aber, Marian has helped thousands of international students to get the most from their time studying in the UK - and her advice can help you, too.

Read on to find out what life is really like as a student in the UK.

In the first year, most undergraduates are given a room in university halls (‘halls of residence’ is the full name, but everyone just calls them ‘halls’). By second and third year, many people will have buddied up with a group of friends to rent a private house in town.

However, it’s common for international students to stay in halls throughout their degree – and some universities will guarantee a halls place for each year of your degree.

University halls are owned and run by the university. Generally, you’ll get a room in a shared flat with a group of other students. All your bills are covered in the rent.

You’ll have various options: catered or self-catered; en-suite or shared bathroom, for instance. You’re almost certain to have your own room; shared dorm rooms are uncommon in UK university halls.

“If campus accommodation is available it is a good choice,” says Marian. “You will have accommodation that is suitable for a student and your university will have thought of everything you need from space to study to good wi-fi.

“It is also likely to be convenient for lectures, have good facilities for socialising and also for doing your laundry or cooking a meal for your new friends. Aberystwyth guarantees campus accommodation to all international students for this very reason.”

University halls aren’t the only option: you might choose to stay in private halls instead. There are pros and cons to each.

Generally, university halls will be on campus, while private halls might be based further away. Private halls may have better facilities, but can also be more expensive.

Some students may even prefer not to live in halls at all and move straight into private accommodation instead.

Bear in mind, halls tend to have a busy social scene. If you’re living away from that in a private house from the beginning of your time at uni, you might have to work harder to meet people and make friends.

Freshers Week happens at the beginning of your very first term, during the week before you start lectures.

The idea behind Freshers Week is for students to socialise, make friends, get to know their surroundings and try out student societies.

But it’s that socialising bit that’s the main event: you can expect a week packed full of student club nights, drinks promotions and non-stop parties.

What if you’re not a hard-drinking, club-loving party animal, though? No problem; there’s plenty more to do during Freshers Week.

Your university will host many social events throughout the week: expect everything from paintballing to bowling, picnics to pub quizzes. You’ll almost certainly find your uni runs specific events for international students.

At Aberystwyth, for example, all international students are invited to a welcome weekend that happens before Freshers Week.

Events during that particular weekend give international students the chance to meet each other, as well as to mingle with important local figures such as the mayor and local MP.

University study is all about independent learning. The amount of solo study you’ll be expected to do depends entirely on the course you’ve chosen.

Some arts and humanities students may spend as little as six hours a week in lectures and seminars, but will make up that time with lots of independent reading and research.

Science students, on the other hand, have a lot more contact hours, with labs and practical classes they must attend on top of lectures and seminars. Wednesday afternoons are usually kept free for sports.

There’s a lot you can do to prepare for academic study in the UK. You can expect to receive information from your university about getting ready, which you should read carefully.

You can also find plenty of information online. Of course, there’s lots of information on The Student Room’s UK study section; sites such as UKCISA will also be helpful. Future Learn has an online course to help you prepare to study and live in the UK.

Once you arrive, you should find your university provides ongoing support. “Look for sessions or modules you can sign up for when you arrive on subjects such as academic writing and referencing,” says Marian.

“Do also remember university is new to all first year students, talk to your new UK student friends and you may find they feel the same way as you!”

Every university is different, and one of the main differences will be whether yours is a campus university or a city-based university.

Campus universities have all the university buildings within one space (the campus). That means lecture theatres, laboratories, libraries, accommodation, shops, bars and sport facilities are all in the same place – making it easy to get around quickly.

These universities often benefit from a real sense of community. Making friends as a first year is easy on a campus university because everyone lives in neighbouring blocks and goes to the same places. Lots of people enjoy this university experience, but it can feel claustrophobic for some.

“Studying at a campus university is a great way to integrate yourself into student life from the outset,” says Marian.

“Everything you need is located together from lectures to library, from social life to student support.

“All services on campus are geared towards student life and can make it much easier for you to settle in to your new UK university life.”

City-based universities are much more spread out. The university buildings will be scattered throughout the city, as will the accommodation blocks and other facilities.

That means you’re going to feel part of city life from day one – you’ll probably feel more independent and you’ll certainly have a more varied social scene and nightlife on your doorstep.

But cities are big, so you’ll spend more time travelling between places and may find the scale of a city university actually makes you feel more alone. In the end, it’s a personal choice as to where you will be happier.

Once you arrive at your university, you’re sure to discover some strange traditions that are specific to that one place. Whether it’s an unusually bitter rivalry with the neighbouring uni or a bizarre annual fancy dress event, every university has something that makes sense only to its own students.

At Aberystwyth, every student at Aber will learn how to ‘kick the bar’. “It’s nothing to do with drinking!” says Marian. “It’s a tradition to finish a walk along Aber’s beautiful Victorian promenade by kicking the bar or railing at the north end, at the foot of Constitution Hill or ‘Consti’.”

“This ritual has been practised for decades and is a time honoured Aber tradition, the origins of which are hotly disputed!

“One version of the origin is that gentlemen flirtatiously loitered outside Alexandra Hall kicking the bar because it was originally a women’s hall.

“Another is that Prince Edward (later Edward VII) who visited the town in 1894,  put his foot on the bar to tie his shoelace and everyone since tapped the bar for its royal connections.”

The UK’s ancient universities have been around for long enough to establish some particularly bizarre traditions.

Take Raisin Weekend at the University of St Andrews. Originally, freshers (nicknamed ‘children’) used to give their university ‘parents’ half a kilo of raisins in return for a raisin receipt written in Latin confirming they had received the gift.

Nowadays, Raisin Weekend is more akin to a Freshers Week 2.0 where freshers turn up to third years’ homes with alcohol and crazy costumes, ready for a weekend of non-stop house parties.

Or how about the ‘Time Ceremony’ that takes place at the University of Oxford’s Merton College once each year? Students taking part in this are required to walk backwards for an hour to prevent the time-space continuum from collapsing in on itself. The UK can be an odd place...

Studying in the UK: support for international students

Living in the biggest UK cities – a guide for international students

How to work in the UK after your degree

How much does it cost international students to go to university in the UK?

The cost of living for international students in the UK

What you should know about student drinking culture in the UK

Packing checklist for international students coming to the UK

Five reasons to study engineering in the UK

Poll
Has advance information helped during your exams?