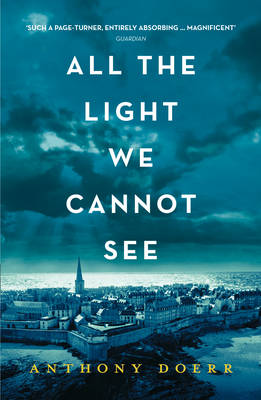 Every once in a while a novel comes along that can only be described as unforgettable: Anthony Doerr's All the Light We Cannot See, is about a blind French girl called Marie-Laure LeBlanc and a Werner Pfennig - a German orphan boy, skilled in patching up electrical devices. During the Second World War, Marie-Laure is etched out as a character who has completely lost her eyesight by the age of six. To help Marie-Laure learn more about her environment, her father, who practices as a locksmith at the Parisian Museum of Natural History, creates a wooden replica of their Parisian neighbourhood for her to learn by heart, solely through touch. This is coupled with learning in braille and solving difficult puzzle boxes for Marie-Laure but the two's life descends into total chaos because of her father possessing a cursed blue diamond, with red flames dancing in its center.

The story goes that whoever keeps the 'Sea of Flames' in their possession will not die but misfortunes will strike all of that person's near and dear. The legend soon spells out to be true because Marie-Laure's father is taken away by the Nazis to prison camps eventually, at a time when Nazi Germany is busy occupying France. Meanwhile, Werner joins the Nazi military, where he is taught that everybody who is joining those superior training grounds will move forward with the same speed towards the same goals, using the same roads and that every individual's country will be the only thing that will matter to them. Werner surprisingly has some troubles adapting to his new life at Wehrmacht (a Nazi armed forces faction) at first because science has brought him closer to death, and he had spent time in his orphanage discovering the true beauty of science instead.

But everything soon turns tragic: close to the Second World War ending in defeat for Germany, Werner grows a heart because upon meeting Marie-Laure, he goes on to save her twice. Tragically, during the second time, Werner dies trying to save Marie-Laure from another Nazi out to locate the blue jewel. After Werner's death, Marie-Laure discovers that even though she had tried to drown the jewel with Werner in the sea, the jewel was miraculously with him when he had died. The haunting adversity in the book is hard to get over and it is a mesmerizing read about two very different characters - it is easy to feel emotionally-connected to Marie-Laure because she represents all of the sorrow that needs to be survived through, and Werner, who is a contrast, is a through sketch of life's passions - reigned in and utilized brilliantly, sheer talent and pure kindness.

This review was written by Fashion Girl