Join a TSR political party in the Model House of Commons!

Welcome to the TSR Model House of Commons!

Welcome to our community - please get stuck into debating and have a chat in the Commons Bar.

You may have the following questions:

How do I join a party?

The best way to get involved with the MHoC is to join one of our many parties. In there you can form part of the internal community and get to post in a secret sub forum special to that party to carry out all of your internal party political shenanigans.

Once in a party, you can get involved in a number of ways. You could take part in discussions, either in that party or the main MHoC forum - absolutely any user is allowed to do that so please do get stuck in! All of us started out in that way!

If you're looking for a bit more fun, you could see if your party offers any policy ministerial positions where you get craft ideas on areas covering everything from drugs policy to taxes to silly walks. Better yet, you could become one of 50 of our MPs - which allows you to vote on laws proposed to the House.


What parties can I choose from?


TSR uses a special version of proportional representation where any party can 'win' - so make sure you join the party that best represents your beliefs, rather than just a big name from the real world. TSR parties aren't linked to their equivalents in real life, so please do explore and ask plenty of questions.


If you want to get headhunted for a party, or are not sure which one is best for you then drop a post in here and the community will help you out.

If you like the idea of getting more involved in the MHoC then post in here, don't worry, it's not a commitment, so even if you're only slightly interested, you should still drop a note.

All you need to drop down is the following information:

Once you've done that, it might be worth saying hi in our chat thread.

You can complete your journey to the MHoC by heading to this page and formally putting through your request to join the secret party subforum.


FAQ about going further and becoming an MP
FAQ
What does an MP do?
You will be the lifeblood of the MHoC community. In addition to doing the stuff that non-MPs can do (like take part in debates) you'll be one of 50 lucky people in the MP usergroup who gets to vote on new MHoC laws, you and you alone get to say whether a law passes or whether it fails and are key to deciding the future this dynamic game takes.

Do I have to write my own laws?
No, but it's fun. I'd wager that most MPs in the MHoC have never written their own bills. I was an MP for a year and only ever wrote two bills and one motion. If writing isn't your thing then you should just turn up to the items that other people have written and debate them, that's what I usually did.

Do I have to vote?
Yes, but don't worry, it literally takes seconds. Those with poor attendance will be scrutinised and subject to removal. But again don't worry, the speaker will be PMing you every night there's a new vote with the link so it's easy to keep yourself up to date.

How long will I have to wait before I join a party?
MHoC is a 1 person, 1 account game. So in order to keep things fair we ask the Staff at TSR HQ to check for any other accounts that might belong to you to double check they aren't already in MHoC. Sometimes this can take a few days but a dupe check is nothing to worry about - and we've all had one too.

This looks scary!
Uhh... that's not a question. But don't worry, it really isn't. New MPs will receive a welcome pack from me explaining everything to you in detail, it's easy!.

Do I have to use parliamentary language?
Hell no. But feel free to do so if you want. The rest of us just write the same way we'd write in any debating forum.

I have another question, where can I ask it?
In here might be a good idea, else you could try going to ATS, the Speaker's personal questions thread.

You guys are a bunch of neurotic nerds and this forum is really sad because you take it so seriously.
Not really, it's just a game at the end of the day. It's effectively just a unique and more dynamic version of UK Politics and provides you with a different way of debating politics than you get elsewhere on the internet. It's all pretty laid back.

This thread was created in by former Speaker Adam9317, based on a thread created by legendary former MHoC Speaker Jarred. It is now maintained by Debate and Current Affairs Volunteers and Forum Helpers.
Last edited by 04MR17; 2 months ago
2
reply

I'm the Leader of the TSR Liberals so the following points about my party might help anyone interested.

We're an economically centrist and socially liberal party. We've lead several Governments in the past and we currently hold 8 out of 50 seats in the Model House of Commons, as well as being the second party in a Conservative - Liberal - National Liberal Government.

Ultimately, we stand up for Civil Liberties and we are proud to be the party ready to stand up for every individual's freedom and rights. We sit in the centre, able to work with and take the best from both the left and the right, which allows us to push liberal principles, ideas and policies constantly.

The Green Party represents equality, social justice and policies for the public good. We're a party governed by heart and reason, and as such we believe in responsible, ethical action towards making this country a better place to live in for you. We have a commitment to fairness, equal opportunities and the preservation of the environment. Our vision is for a Britain with high quality public services, sustainable energy, fair wages, a strong NHS and the abolition of tuition fees.

The Green Party is concerned with public welfare - we understand that society is better together. We are the party with the courage to demand real solutions to the social, economic and environmental problems faced today, not content with the heedless quickfixes on offer.

We are the party of compassion, sense and sustainability. Join us in supporting a greener future for Britain today.

You can get a feel of the Green Party's policies through our manifesto from the last GE: 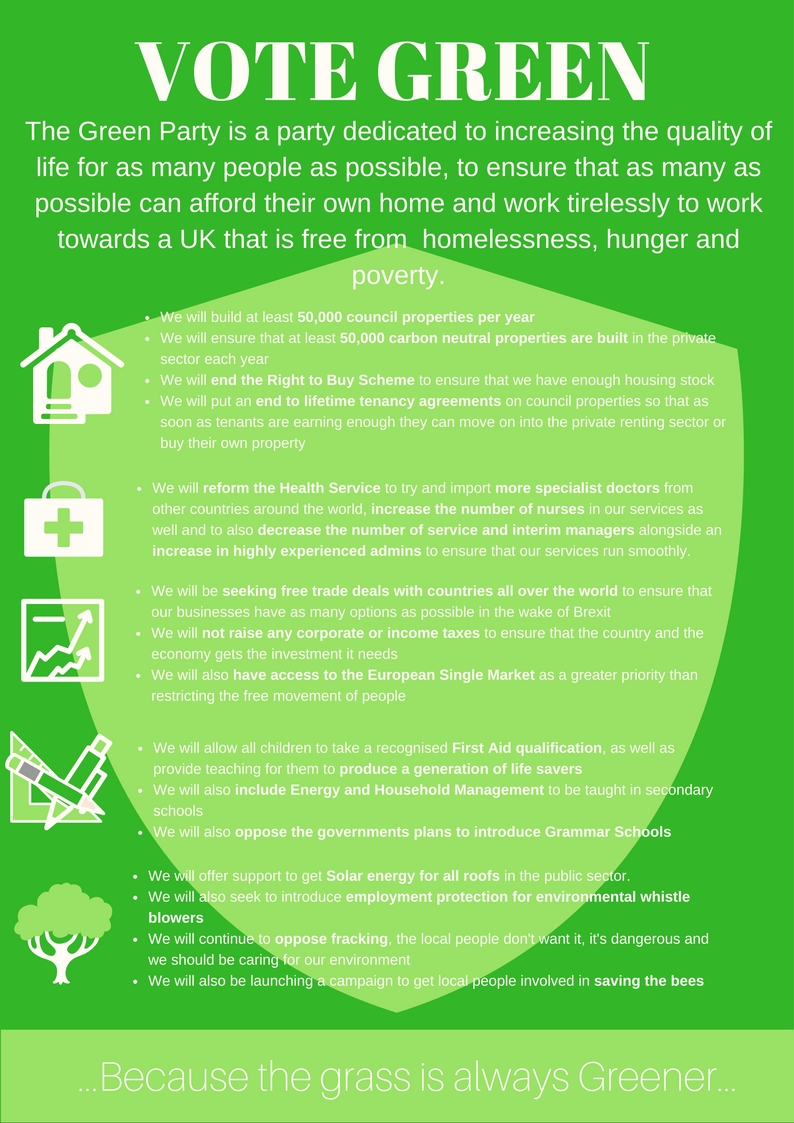 If you would like to ask me a question here, you can. Otherwise, feel free to ask questions about the TSR Green Party in our Q&A thread. If you have a question that is too personal for a public thread, you can send a private message to the Party Leader (barnetlad). If you would like to join the Green Party, you can apply to the user group here. We would love you to join.

TheDefiniteArticle
Badges: 20
Rep: ?
#4
Report 4 years ago
#4
Join either the socialist or the Labour party!
1
reply "Everyone has their part to play. No part is too great or too small; no one is too old or too young to do something."- Bobby Sands

GaelicBolshevik
Badges: 18
Rep: ?
#11
Report 4 years ago
#11
(Original post by TheDefiniteArticle)
Join either the socialist or the Labour party!
Labour, the shill of a bourgeois workers party? Never sir!
0
reply ssshah2
Badges: 12
Rep: ?
#19
Report 4 years ago
#19
Name: ssshah2
Preferred party(s) {if any, we can help you choose!}: Not too sure yet, of various political persuasions
Social stance: Leans left
Economic stance: Leans right
Anything else:
1
reply

Lime-man
Badges: 16
Rep: ?
#20
Report 4 years ago
#20
(Original post by ssshah2)
Name: ssshah2
Preferred party(s) {if any, we can help you choose!}: Not too sure yet, of various political persuasions
Social stance: Leans left
Economic stance: Leans right
Anything else:
Id say either the tsr tory party or the tsr liberal party.

It depends on whether social policy is more important to you than economic policy (or vice versa).

What do you want most from university virtual open days and online events?